(Tokyo Olympics) Top Ten Stars of the Chinese Legion   China News Agency, Tokyo, August 8th (Reporter Wang Zumin) The Tokyo Olympics closed on the 8th. In the Chinese Army that has achieved great success, there are some players that are impressive: they are famous because of the Olympics, and the Olympics are even more exciting because of them. Data map: Su Bingtian in the game. Photo by China N 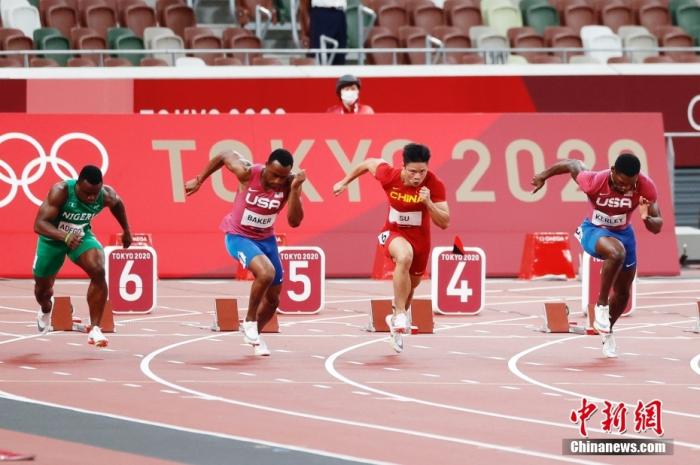 Su Bingtian-sixth place in men's 100 meters track and field, set an Asian record with 9.83 seconds in the semifinals; fourth place in the men's 4 x 100 meters relay.

In the Chinese Army Corps with gold and silver, his ranking seemed a little bleak.

But his results came from the men's 100-meter event, known as the "jewel in the crown" of competitive sports, and from the Olympic track that was difficult for Chinese and even Asians to set foot in. It should be heavier than the gold medal.

In the men's 100m semifinals, he set an Asian record of 9.83 seconds, becoming the 12th fastest runner in the world.

He has ran into the world's first phalanx at the speed of China.

Data map: Malone is in the game.

The only player to win the men's singles championship of table tennis, the first person in the history of the international table tennis to achieve the "Double Lap Grand Slam", and the table tennis player who has won the most world championships and Olympic champions...

After winning the two gold medals of the Tokyo Olympics, a new chapter has been added to his legend.

In the talented Chinese table tennis team, the age of 33 is not an obstacle to him, because he said: "As long as you have love in your heart, you will always be the year to play."

Data map: On July 29, Zhang Yufei showed a gesture of love after winning the championship in the women's 200m butterfly with a time of 2:03.86.

At the Rio Olympics, at the age of 18, she was still an unnoticed young girl.

Only 5 years later, she not only became the player with the most medals in the Chinese Army, but also covered two swimming styles with two gold medals.

Rio is the starting point for her to compete in the Olympics, and Tokyo is the stage where she stands out.

But her energy is far from being fully released.

Perhaps Paris in three years will witness the birth of another oriental superstar.

After 21 years of perseverance, she finally got the Olympic gold medal that achieved a breakthrough for China's track competition; 21 years of hard work has also accumulated the foundation for her to dominate the world.

For the fourth time to participate in the Olympics, she collected gold, silver and bronze medals and fourth place.

Now, her absolute strength and optimistic and cheerful personality have allowed her to break the circle successfully.

With her own efforts, she led the popular sport of women's shot put in China.

The past 13 years has taken away the publicity of the 22-year-old when he won the championship, and when he was on the highest podium in the Olympics, the 35-year-old was already pampered.

In the 10-meter air pistol mixed team competition, he and the "post-00" teenager Jiang Ranxin, known as the "big niece", won the gold. This young and old partner is also the epitome of the "inheritance" of Chinese sports.

He said that Tokyo is the end of his Olympic journey. After the shooting rookie has grown up, he can turn around calmly.

Bell Angel-defending the champion of the women's cycling team scramble.

For the Chinese bicycle project, she is the arrival of an angel.

At the Rio Olympics, she teamed up with Gong Jinjie to win the championship, achieving a zero Olympic gold medal breakthrough for Chinese bicycles.

Today, her partner has changed, but the gold medal has not changed, and the Chinese team has won again in the event.

With two gold medals in the two Olympics, she has had no regrets in her sports career, and she has begun to retire in her first year.

Even if she really retires in the future, on the track kissed by the "angel", the future of China's track cycling will surely be lucky.

Data map: On July 31, in the men's 81 kg weightlifting final of the Tokyo Olympics, 37-year-old Chinese athlete Lu Xiaojun won the championship with 170 kg snatch, 204 kg clean and jerk, and a total score of 374 kg. Among them, snatch, clean and jerk, and total results Both broke Olympic records.

At the age of 37, he won the championship in Tokyo. He became the oldest weightlifting Olympic champion and became an ageless myth in the weightlifting arena.

3 Olympic Games, 2 gold and 1 silver, he is the "military god" in the mouth and heart of fans.

When asked when he would retire, he said that Tokyo may not be the last stop of his sports career.

Maybe you can expect: "Military God" is not old, see you in Paris.

The victory of the Chinese women's volleyball team in Rio allowed her to complete her nirvana from a Chinese star to an international superstar at the age of 21.

But in Tokyo five years later, how glorious and beautiful she was at the beginning, now she is more lost and depressed.

Suffering from hand injuries, her power as the world's number one main attacker was greatly reduced, and the Chinese women's volleyball team was also out early after suffering a three-game losing streak in the group stage.

As the captain and backbone of the team, she deeply blames herself and is full of expectations: the Chinese women's volleyball team will come again in three years!

Data map: On July 30, Wang Shun celebrated his victory after the men's 200m individual medley final in the Tokyo Olympics.

At the 2004 Athens Olympics, the United States team began to win the Olympic gold medal in the men's 200m individual medley.

At that time, far away in Zhejiang, China, a little boy who had been learning swimming for a few years had just passed his 10th birthday.

In Tokyo in 2021, the 27-year-old Chinese boy ended the US team’s four consecutive championships and became the new overlord of the men’s 200m individual medley.

She participated in the two Olympics and won the single and double gold medals in the women's three-meter springboard. This achievement is only comparable to that of the retired "diving queen" Guo Jingjing.

In the Chinese diving team, where there are many strong players and newcomers, there is never a shortage of gold medals and championships. What is lacking is a leader who can stabilize the military and set an example and role model for the young players, just like her at the age of 30.