Tokyo's "breaking game" is more valuable than the gold medal

(Tokyo Olympics) Tokyo's "breaking game" is more valuable than gold medals   China News Agency, Tokyo, August 7 (Reporter Wang Zumin) The Olympic Games is the highest stage of competitive sports, and the gold medal is the top certification for players in this field. But in the Olympics, there is another kind of achievement value that surpasses the gold medal, and that is-breakthrough.   In this 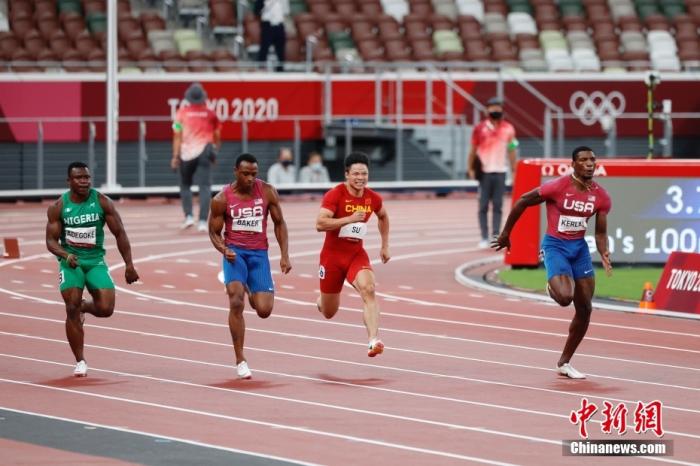 China News Agency, Tokyo, August 7 (Reporter Wang Zumin) The Olympic Games is the highest stage of competitive sports, and the gold medal is the top certification for players in this field.

But in the Olympics, there is another kind of achievement value that surpasses the gold medal, and that is-breakthrough.

In this Olympics, in addition to the exciting momentum of the Chinese Army's winning of gold medals by advantageous events, the rise or destruction of some potential advantages and even weaker events has made people even more pleasantly surprised.

Sprinting is known as the "jewel in the crown" of competitive sports because it can show strength and speed most directly and purely.

But this project, which requires extremely explosive power, was difficult for Chinese and even Asians to get involved in the past.

However, in recent years, China's sprint has repeatedly achieved breakthroughs and made history again in this Olympics: Su Bingtian became the first Chinese to enter the men's 100-meter final of the Olympics and won sixth place.

His 9.83 seconds in the semifinals not only broke the Asian record, but also became the 12th fastest runner in the world.

This is Gong Lijiao's first Olympic gold medal in his career, as well as the first gold medal won by the Chinese track and field team in this Olympics.

In the field competition, the breakthrough of the Chinese team has been given a super "core" of gold medals or medals.

Gong Lijiao reached the top of the women's shot put podium with 20 meters 58. This is not only the first Olympic champion of the Chinese team in this event, but also the first Olympic gold medal of China's track competition.

In the women's javelin finals, the 27-year-old Shandong girl Liu Shiying advanced by leaps and bounds. She won the championship with a score of 66 meters 34. The Chinese women's javelin, who had never won an Olympic medal, directly "matched" the gold medal.

In the men's triple jump field, Zhu Yaming, who participated in the Olympics for the first time, set his personal best twice and finally won the silver medal with 17.57 meters, creating the best record in the history of the Chinese team in this event.

The Tokyo Olympics is the least time the Chinese swimming team has sent contestants in the past 17 years. However, it has won 3 golds, 2 silvers and 1 bronze, ranking fourth on the swimming medal list. It is the third best result in all previous Olympics, and the number of gold medals is a record. The most ever.

Among the three gold medals won by the Chinese swimming team, two have breakthrough significance-the women's 4×200m freestyle relay. The Chinese team won the championship with a time of 7 minutes 40.33 seconds and set a world record. This is also a relay event in Chinese swimming. The first Olympic gold medal in China.

On July 30, local time, in the men's 200m medley final of the Tokyo Olympics, Chinese player Wang Shun won the championship in 1 minute and 55 seconds. After winning the bronze medal at the Rio Olympics, he successfully reached the highest podium.

This is also the first gold medal won by the Chinese swimming team in the men's event of the Olympic Games.

In the men's 200m medley final, Rio Olympic bronze medalist Wang Shun won the championship in 1 minute and 55 seconds, filling the Olympic gold medal gap in Chinese swimming in men's medley and breaking Chinese swimming in this Olympics. The embarrassment of "Yin is prosperous and Yang is declining".

In the women's 1500m freestyle final, although "post-00" teenager Wang Jian Jiahe passed the medal (fourth place), she broke her own Asian record in the preliminaries with 15 minutes 41.49 seconds.

Women's canoeing wins the first gold medal in the Olympics

On August 7, Beijing time, in the women's 500-meter double rowing final of the Tokyo Olympics, the Chinese combination Xu Shixiao/Sun Mengya won the championship in 1:55.495. This is also the first Olympic gold of the Chinese women's canoe team.

In this Olympic Games, China's rowing and kayaking have respectively created 1 gold, 2 bronze, 1 gold and 2 silver achievements, among which many medals have breakthrough significance.

In the rowing arena, Chinese athletes are not too good.

On July 28th, Liu Zhiyu (left)/Zhang Liang in the game.

On the same day, in the men's double scull final of the Tokyo Olympic rowing event, the Chinese combination Liu Zhiyu/Zhang Liang won the bronze medal.

Prior to this, Asians had never won a medal in the men's rowing event of the Olympic Games, but Zhang Liang/Liu Zhiyu pulled their teeth and won a bronze medal for men's double sculls.

It is reported that the bronze medal boat of the Chinese team took only more than three months from the formation to the medal.

Other events: three-person basketball won the Olympic medal for the first time in karate to break the monopoly of the Japanese team

The US team won the championship and the Russian Olympic Committee won the runner-up.

Three-person basketball became an official event for the first time at the Tokyo Olympics.

The dominant position of Japanese karate is equivalent to the Chinese table tennis team or diving team.

Yin Xiaoyan and the Chinese karate team have already made history by winning a medal in this "privately customized" event that only exists in this Olympic Games.