Her dream came true at the age of 16

China News Service, Tokyo, August 3rd, title: (Tokyo Olympics) Her dream came true at the age of 16   China News Agency reporter Yue Chuan   Board the Olympic arena, complete the high-quality complete set, stand firmly on the ground, and win the championship gold medal.   The 16-year-old Guan Chenchen has seen such a scene in his dream more than once. After coming to Tokyo, it appeared more f 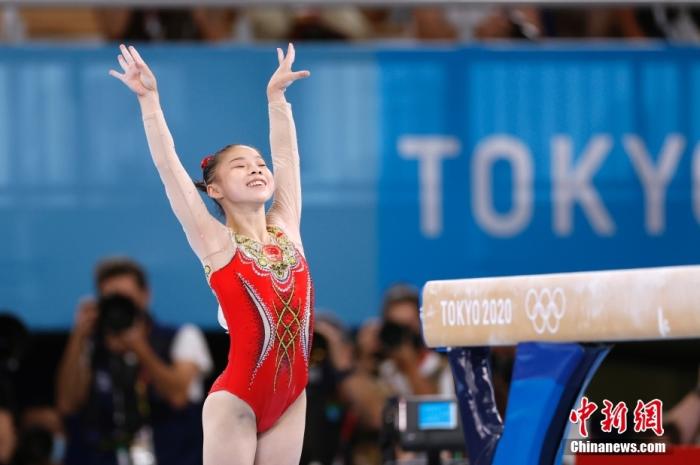 (Tokyo Olympics) Her dream came true at the age of 16

Board the Olympic arena, complete the high-quality complete set, stand firmly on the ground, and win the championship gold medal.

The 16-year-old Guan Chenchen has seen such a scene in his dream more than once.

After coming to Tokyo, it appeared more frequently.

Especially recently, I dream about it almost every day.

This beautiful dream has become a reality today.

In the Tokyo Olympic Gymnastics Women's Balance Beam Final held on the 3rd, with the huge advantage brought by the super difficulty, the only 16-year-old Guan Chenchen Yiqi Juechen finally won the gold medal.

The process of her winning the championship is exactly the same as her dream.

For Guan Chenchen, who participated in the Olympics for the first time, this is a difficult battle to fight well.

Either nervousness, mistakes, or accidents. In this Olympic Games, the Chinese women's gymnastics team has left too many regrets in the competitions that have ended, failing to show their best side.

Although during this period, Guan Chenchen, who focused on the balance beam single event, was more of a "bystander", but those regrets would hardly not make ripples in her heart.

As the last player of the Chinese gymnastics team in the Tokyo Olympics, whether the team can sweep away the haze and have a beautiful ending, this burden is placed on the 16-year-old Guan Chenchen.

However, in the game, it is difficult to find a trace of restraint and tension in Guan Chenchen's movements and expressions.

Only after the game, when Tang Qianjing, her sister, picked her up and said "Yes" to her, Guan Chenchen really had the urge to cry.

Guan Chenchen proved with her actions that she can bear this heavy burden and the corresponding honor.

"Because it's the first time to participate in the competition, no one knows me, so the pressure is less. The process is very important. I just need to let go and show the level of my usual training." As Guan Chenchen said, the competition In the middle of the world, she is truly mind-boggling, focusing on her actions and not thinking about the results.

In Guan Chenchen's eyes, the Olympics seems to be just an ordinary game, and the gold medal that everyone desires is a little reward for her winning the first place.

"I think the biggest opponent is myself. As long as I do a good job, there will be no regrets." At the end of the balance beam qualifying round with the first place, Guan Chenchen, who completed the Olympic debut, said frankly that there was no live audience. Next, there is not much difference between the Olympics and the competitions she has participated in before.

Perhaps it was this kind of peace of mind that made her dream come true at the age of 16.

For Guan Chenchen, another special feature of this final is that she finally has the opportunity to compete with the American star Byers.

"I used to sit in front of the TV and watch the game, I thought she (Byers) was amazing!"

Before the game, Guan Chenchen had a small wish, which is to be higher than her or Byers.

After the game, she secretly revealed that the answer was "it seems to be about the same."

Guan Chenchen also has the answer to how to reward himself.

In life, she likes all kinds of cups.

Whether it is a thermos cup, a straw cup or something else, as long as it is a beautiful cup with a lid, it is her favorite.

However, except for pink.

Someone asked: "Does a 16-year-old match a vacuum flask?" She immediately replied: "It matches!"

The composure and firmness shown on the field are easily forgotten by the people around him. Guan Chenchen is actually just a little girl.

What does it mean to be an Olympic champion?

Regarding this question, Guan Chenchen thought for a while and replied: "This will motivate me, and I will work harder in future training!" (End)