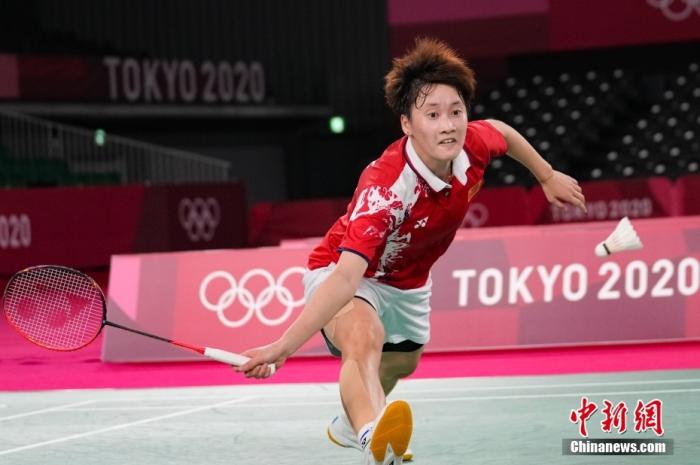 The Chinese badminton team won two golds, four silvers and a total of six medals. The overall performance was better than the previous Rio Olympic Games.

Zhang Jun, chairman of the Chinese Badminton Association, expressed his satisfaction with the team's performance. He believes that all players are going all out to focus on this game. He is proud of the team.

The picture shows Chen Yufei in the game.

In the Rio Olympics five years ago, although China won the men's singles and men's doubles gold medals in badminton, the overall performance was not as good as outside expectations, especially in the traditionally superior women's doubles and mixed doubles.

Therefore, during the Tokyo Olympic cycle, the badminton team, one of the pioneers in China's sports gold, has been under great pressure.

In the five individual events, the national badminton players have reached the finals.

On the evening of August 2, Beijing time, in the men's singles final of the Tokyo Olympics badminton, Chinese player Chen Long lost 0:2 (21:15, 21:12) to Danish player Ansai Long and won a silver medal.

The picture shows Chen Long in the game.

As the only veteran in the team to have participated in the Olympics, the 32-year-old Chen Long played a role in stabilizing the military's morale.

Although he lost 0:2 to the Danish star Anseron in the men's singles final and missed the defense, Chen Long managed to overcome many challenges and was on the Olympic podium for the third time.

In the past three Olympic Games, Chen Long has collected gold, silver and bronze medals.

Zhang Jun revealed that Chen Long had two huge blood blisters on the soles of his feet, which affected his movement on the court.

Rao is so, Chen Long still made it to the finals.

In Zhang Jun’s view, this Olympics is different from the past. “Who can forget that this is the Olympics, who will perform better.” In the women’s singles final, facing the Chinese Taipei star Dai Ziying, the young Chen Yufei truly did everything. Fight with the ball and calm down to attack the opponent.

It was precisely with this state of "selflessness" that Chen Yufei finally defeated a strong enemy and won this hard-won gold medal.

"All five events have players rushed to the finals, and we basically completed the task. Every team member went all out to focus on this game." While scoring high scores for the contestants, Zhang Jun said frankly that some of the individual events are okay. Doing better is a pity, but it is also a tuition fee that young players need to pay as they grow up.

Except for Chen Long, none of the Guoyu players have any experience in participating in the Olympics.

In Zhang Jun's view, the young players exposed the problem of excessive ups and downs in their hearts during the game.

"It's a pity for the women's doubles. They played well before, but they carried a burden in the finals, and they were a little concerned about gains and losses." Zhang Jun believes that Chen Qingchen and Jia Yifan's attention was too much on their opponents, leading to incomplete release. Out of oneself.

There are many similar things that deserve serious consideration and summary, "After the Tokyo Olympics, our young players will grow a lot and they will learn a lot."

In the five individual events of the Tokyo Olympics, Guo Yu won two championships, and the remaining three golds were divided among Indonesian, Danish and Chinese Taipei players.

Due to the epidemic, a number of previous competitions, including the Sudirman Cup, Tangyou Cup, and World Championships, will all be held within this year.

Zhang Jun revealed that the association will start from the health of athletes and participate in events with a higher safety factor.

Looking back on the Tokyo Olympic cycle, Zhang Jun said that the postponement of the Olympics has brought many difficulties to Guoyu's preparations, including not participating in international competitions for more than a year, but the team has been trying to overcome them.

Before the expedition, Guoyu made sufficient preparations for difficulties, and these efforts finally paid off.

Zhang Jun believes that this game is an opportunity for the players to re-recognize themselves, and then further improve themselves and strive for more honors.