Sjöström after the silver success: "Wants to hug every single person"

Early on Saturday morning, Sarah Sjöström swam her first Olympic medal in Tokyo. The silver in the 50 meter freestyle was a real sensation when Sjöström broke his elbow in February. - It was a long trip to the Olympics, you could say. I have not believed in myself all the time, Sjöström tells SVT. 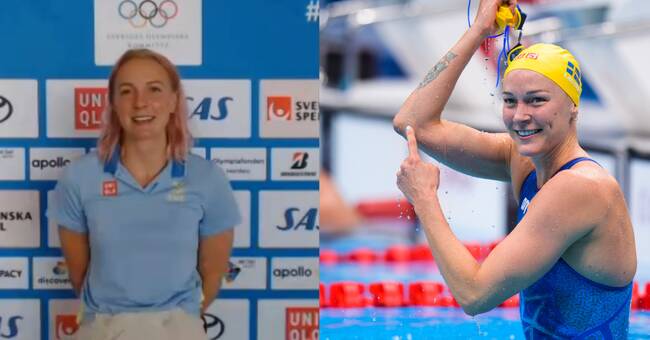 Barely a day after the unlikely Olympic silver in the 50 meter freestyle, Sarah Sjöström, on a link from Tokyo, talks about the celebration of the medal.

- I, Daniel (Ståhl) and Simon (Pettersson) were celebrated by the Swedish Olympic team when we returned to the Olympic village yesterday.

It was very nice.

"Have not believed in myself all along"

It was by no means obvious that Sjöström would even go to the Olympics in Tokyo.

- It was a long trip to the Olympics, you could say.

I'm incredibly proud to have managed to recover.

It has been a long way back to make the arm work again as it should in the water, says Sjöström.

- I have not believed in myself all the time.

I have thought that it might be better to just cancel the Olympics, because I hardly think I will go to the semifinals.

I would have left the Olympics and exceeded my expectations even without this medal.

So the medal was an extra big plus.

In February, Sarah Sjöström slipped on an ice patch outside Eriksdalsbadet in Stockholm and broke her elbow.

The recovery is far from perfect.

I have pretty good strength, but I need to build some muscle mass.

I lost four centimeters of muscle mass around my arm, and I did not immediately have huge arms before.

So there is little to do there, says Sjöström.

- Right now I am in a position where I build muscles, but lose them quite quickly again if I do not work with it, especially in the right arm.

I have to try to get a good symmetry between the arms.

Then it will be quite intense competition in the future, so I will try to balance it and get some strength training between the competitions.

Yes, Sarah Sjöström must not relax too much after the Olympic success as the calendar is full of competitions that were canceled during the corona pandemic.

- I will compete already in three weeks again in the competition that will be like the Champions League but with swimming.

Then there is a competition every week for five weeks.

It gets quite intense due to so many competitions being canceled last year.

"Want to hug every single person"

- I have received such incredibly good support throughout the Olympics, not just because of the medal.

The reactions have been that it is unbelievable that I have been able to get back to this level and make it to the finals after this year I have had.

So I am extremely grateful for that, says Sjöström.

- It is difficult to know how to thank everyone.

I try to respond to as many messages as possible and thank you.

I really want to hug every single person, but it's a pandemic so you can not hug everyone, says Sjöström and laughs.

Now the Olympics are over for Sarah Sjöström who leaves the Olympic village after completing her competitions.

- Now it will be to fly home to Sweden and just take it easy and try to rest, handle the jet lag and maybe take a little vacation.

I will probably sleep quite a lot, says Sarah Sjöström.