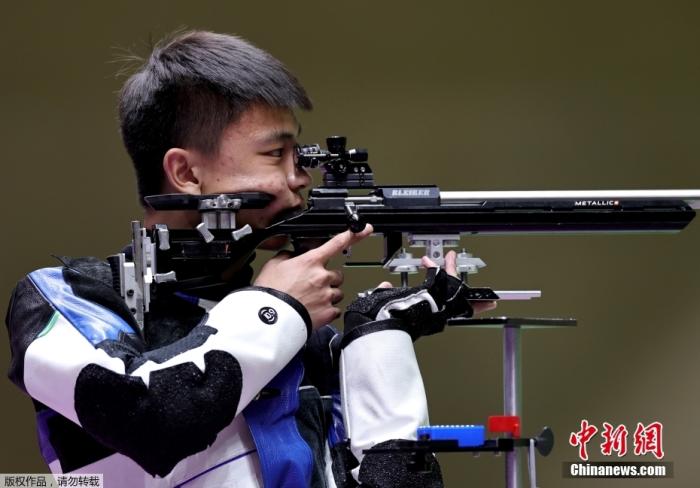 The Chinese team topped the gold and medal lists with 4 golds, 1 silver and 6 bronzes.

In summarizing the expedition, Liang Chun, director of the Shooting and Archery Management Center of the State Sports General Administration of China and the leader of the Chinese Olympic shooting team, praised that this time the gold medals were attended by contestants born after "00", which can be described as a young hero since ancient times.

On the 2nd, Beijing time, in the men's 50m rifle three-position competition at the Tokyo Olympics, Chinese player Zhang Changhong, who entered the final with second place in the qualifying round, played well, breaking the world record with a 466 ring score, winning the Olympic Games and winning the championship.

The picture shows Zhang Changhong in the game.

On the 2nd, the Chinese shooting team did a good job. After winning the first gold medal in this Olympics, it shot down the last shooting gold medal.

Due to the impact of the epidemic, the Chinese shooting team was absent from international competitions for nearly two years.

There were difficulties, but the Chinese shooting team dared to fight a tough battle, won the first gold and broke the deadlock of the "no gold day".

The women's 10-meter air rifle is the first gold event of the Olympic Games.

"Post-00" contestant Yang Qian performed well, reversing a strong opponent in the final round to win the championship.

"We have completed the set tasks," Liang Chun concluded, "We have become the pioneers of the Chinese Olympic delegation, achieved the best results in overseas competitions, and trained a group of young athletes."

The four gold medals all have the shadow of the "post-00" teenager.

Liang Chunzan said: "Our rifle team's 6'post-00' teenagers, of which 3 won a gold medal, 1 won a silver medal, and 1 won a bronze medal. Since ancient times, we have innovated the Olympic selection method to improve the selection. Many young people have integrated into the shooting project. As long as they are well trained, they can carry the burden of our shooting team."

The 10-meter air pistol mixed team is a newly established Olympic event. A total of 20 teams participated this time.

Liang Chun believes that the results achieved in this competition are attributable to the strong support of the party and the country for the shooting cause.

Shooting is a niche project, and the country has given a lot of support in terms of training conditions and competition guarantees.

In addition, it is also due to the large amount of work done by all coaches, athletes, rehabilitation teams, physical fitness teams, and psychological teams. "Every gold medal is the hard work of everyone in our team. It is not easy."

Another successful experience of the Chinese shooting team is to focus on researching and responding to the rules of the game.

"The first 10 rounds of the air rifle final are very important. The first 10 rounds lead, and the back is basically within the top three." Liang Chun said, "We improved the selection method and gave the first 10 rounds a bonus factor. Today Zhang Changhong played ahead. Well, there are very few mistakes later. On the contrary, if you fall behind at the beginning, it will be difficult to catch up later."

Liang Chun revealed: "The trials are divided into 4 games, which will give extra points to athletes who have participated in international competitions, but the scores are not high, mainly for young people. If a few games are played well, such as Yang Qian and Xiao Jia Ruixuan Those without points can also be selected for the Olympic lineup."

In addition, one experience of the Chinese shooting team is to improve the players' ability in the finals.

However, Liang Chun also pointed out that this competition also exposed some problems, such as some people who seemed nervous in the finals.

There are still some lessons and shortcomings, all of which need to go back and summarize them.

"There are still three years to go for the Paris Olympics. Follow-up work will be done in detail, and we will strive to achieve good results in Paris!" (End)