A Crash Handbook for Veteran Drivers in the Olympics丨Tokyo arena, those moving sympathies

On the evening of July 30, the men's singles final of the Tokyo Olympic Games ushered in the "civil war" of Chinese players. In the end, Malone defeated Fan Zhendong 4:2 and successfully defended his title. The picture shows Ma Long and Fan Zhendong raising the national flag to salute after the game. Photo by China News Agency reporter Han Haidan   Chinanews client, Beijing, August 2nd (Xingchen 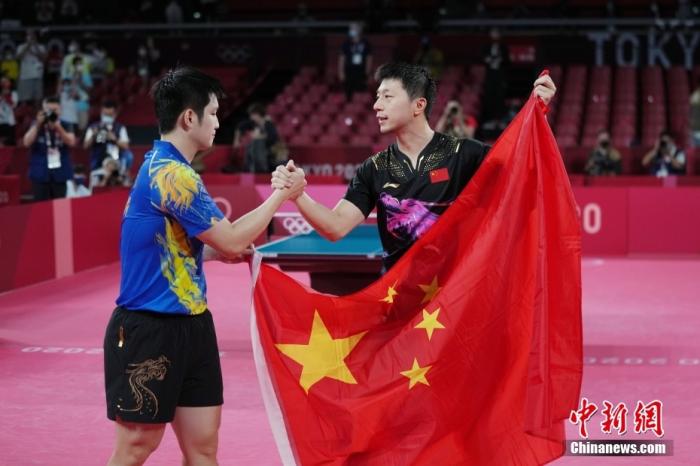 On the evening of July 30, the men's singles final of the Tokyo Olympic Games ushered in the "civil war" of Chinese players.

In the end, Malone defeated Fan Zhendong 4:2 and successfully defended his title.

The picture shows Ma Long and Fan Zhendong raising the national flag to salute after the game.

In fact, apart from the competition, they also have the greatest respect and love for each other.

Today, I will take you to see the moments where the athletes cherished each other in the Tokyo Olympics.

At the Tokyo Olympics, the 23-year-old Japanese tennis star Naomi Osaka was upset to the Czech Republic in the women's singles 1/8 finals. This unexpected departure also caused her to suffer a lot of criticism after the game.

Kei Nishikori, who participated in the Olympic Games for the third time as Japan's "big brother of tennis", expressed his hope that the outside world can give the young Naomi Osaka more understanding.

"When I participated in the Beijing Olympics for the first time, I had a lot of things in my mind. Naomi Osaka is a very good player, but the Olympics are different from other competitions. I hope she can cheer up and continue to work hard."

For the young little future, such encouragement is undoubtedly the motivation to help her out of the gloom.

On July 24, Japan's Rikako Chijiang appeared in the women's 4x100m freestyle relay preliminaries, but the Japanese team finally ranked fifth in the group and unfortunately missed the promotion.

At the 2018 Jakarta Asian Games, Chijiang Rikako won 6 gold medals alone, and everyone is very optimistic about her future.

However, a sudden leukemia forced this talented player to leave the pool.

From illness to returning to the game, Chijiang Lihuazi experienced nearly 600 days.

Being able to stand on the Tokyo arena is already no small success.

After the Japanese team was interviewed, Chinese player Zhang Yufei took the initiative to hug Chijiang Rikako. There is encouragement and great respect in this embrace.

With the 4:2 victory over teammate Fan Zhendong, Ma Long defended the men's singles table tennis championship. The "civil war" of the Chinese players attracted attention from the outside world, and the dialogue between the two was even more heartwarming.

"Fan Zhendong is the strongest player in the world. Only by playing at the best level in the final can he win." "Fan Zhendong has improved recently. Whoever performs well in the game is more likely to win." This is Malone's match before and after the game Fan Zhendong's evaluation is full of affirmation of "little brother" between the lines.

"Ma Long is undoubtedly the best in the history of this era." "I feel that the years have not left too many traces on Ma Long." In the eyes of 24-year-old Fan Zhendong, Ma Long is a role model for himself.

On July 31, in the semi-finals of the Tokyo Olympics badminton women's singles, Chinese player Chen Yufei defeated Chinese player He Bingjiao 2:1 to advance to the final.

Pictured why Bingjiao is in the game.

He Bingjiao can't make a sound when his opponent retires

On July 29, in the women's singles 1/8 finals of badminton, Chinese player He Bingjiao and American player Zhang Beiwen met.

Zhang Beiwen won 21:14 in the first game. However, in the second game, Zhang Beiwen suddenly fell to her knees and was pushed out of the court by a wheelchair. He retired due to injury.

After seeing that the opponent was injured, He Bingjiao immediately stepped forward to check the situation. When interviewed after the game, she couldn't cry: "If I can, I want to finish the game with her."

On July 31, the Chinese women's volleyball team took a group photo after the game.

On the same day, in the women's volleyball group match of the Tokyo Olympics, the Chinese team defeated the Italian team 3-0.

Although defeated Italy 3:0, the Chinese women's volleyball team still missed the top 8 of the Tokyo Olympics.

In the 2:3 defeat of the Russian Olympic Committee team, Zhu Ting scored 17 points with an injury. After the game, the opposing coach gave Zhu Ting encouragement with a "fist".

Gong Lijiao and Adams explain the friendship of old rivals

On August 1, Chinese player Gong Lijiao won the women's shot put championship, which was also the first gold medal for the Chinese track and field team in Tokyo.

The silver medalist was the Olympic "Five Dynasty veteran" Adams, and this is also Gong Lijiao's fourth Olympic journey.

At the press conference after the game, the two veterans talked happily.

"I used to watch Big Sister Adams win the championship. She was still fighting at the age of 37. She was the object of my study. She already has two children, and I want to have my own." "Gong Lijiao is a good opponent, but she becomes a mother. The players are not easy, and all aspects of physical function will face changes. If Gong Lijiao wants to appear as a mother player, I have to say, good luck." The appreciation and friendship between the two veterans have long surpassed the game.

On July 31, Beijing time, in the Women's Windsurfing RS: X Medal Competition at the Tokyo Olympics, Chinese athlete Lu Yunxiu performed well and won the gold medal in the event.

The picture shows Lu Yunxiu holding up the gold medal.

Two windsurfers embracing each other

On July 31, in the windsurfing medal round of the Tokyo Olympics, Chinese athlete Lu Yunxiu crossed the finish line for the third time. With a total of 36 points, she won the gold medal in the women's windsurfing RS:X level competition.

After winning the championship, Lu Yunxiu jumped into the water and celebrated with the French player who won the silver medal. After that, the two embraced together in the water to celebrate their hard-earned medal.