Once returned to the provincial team, she has now regained the "lost ground" for Guoyu

China News Service, Tokyo, August 2 (Bian Liqun) At the moment when he won the championship, Chen Yufei knelt on the ground and screamed up to the sky. She not only defeated the "bitter master" Dai Ziying once again, but also regained the "lost ground" for Guo Yu in the Olympic women's singles event.   Chen Yufei said that she has always regarded Dai Ziying as a goal over the years. From the be 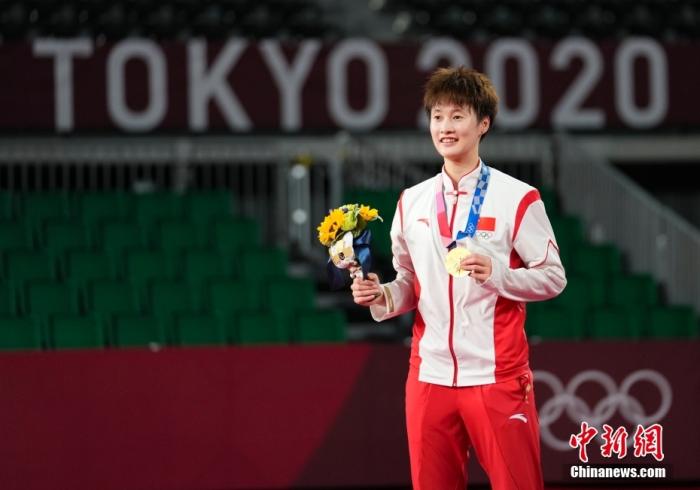 China News Service, Tokyo, August 2 (Bian Liqun) At the moment when he won the championship, Chen Yufei knelt on the ground and screamed up to the sky.

She not only defeated the "bitter master" Dai Ziying once again, but also regained the "lost ground" for Guo Yu in the Olympic women's singles event.

Chen Yufei said that she has always regarded Dai Ziying as a goal over the years. From the beginning, she always loses, and then breaks through once or twice. The opponent is the driving force for her to move forward.

Although Chen Yufei had only won 3 of 18 matches in the overall battle record, in the 4 matches since 2019, Chen Yufei won the opponent 3 times.

The victory in the Tokyo Olympics this time is a great sign of Chen Yufei's opening of her era.

She caught up with Dai Ziying step by step, and she also established a foothold in Guoyu one step at a time, and made her own way in the world arena.

And Chen Yufei is only 23 years old this year, the youngest in this national feather Olympic roster.

Chen Yufei was born in Zhejiang in 1998. She has been lively, active and well-coordinated since she was a child. She was selected by the sports school when she was still in kindergarten.

But at that time, Chen Yufei performed mediocre in the World Youth Championships and other major competitions. After entering the first team, there was some disagreement in the team as to who the key training object was. Zhang Ning, then Chen Yufei's head coach, had been supporting her.

"My instincts and experience tell me that Chen Yufei is a good seedling, but she has a small shortcoming, that is, her temperament, so I always remind her on the court to be serious, to persevere, to be tough, and to Domineering."

In the Tokyo Olympic women's singles final, the 23-year-old Chen Yufei was very calm. Facing Dai Ziying's strong equalization in the second game and the continuous pursuit of points by her opponents in the deciding game, Chen Yufei survived at the critical moment. The seriousness, persistence, tenacity and domineering suggested by Ning.

At the press conference after the game, Chen Yufei thanked her previous coaches, "It is with their company that I walked out of adversity. Every coach has helped me a lot, and the glory belongs to all of us."

After the national feather women's singles frustrated at the Rio Olympics, the teenager represented by Chen Yufei was pushed to the stage to participate in various competitions.

The price of youth is painful, defeat in the Soviet Cup, missed the Uber Cup final for the first time in 34 years, and the Jakarta Asian Games set the worst in national badminton history... Chen Yufei was pushed to the forefront.

The turning point occurred in 2019, a year of Chen Yufei's qualitative change.

After the Tokyo Olympics was postponed for one year, Chen Yufei, who was further precipitated, easily passed 2:0 in the two group matches, and the quarterfinals also defeated South Korea's An Xiying 2:0.

The opponent in the semi-finals was He Bingjiao, who defeated her teammate twice in the simulation match in the team, but this time, she won without risk.

In the final, facing Dai Ziying, who she had always regarded as the target, Chen Yufei became the winner once again, standing on the top of the Olympic podium.

The award to Chen Yufei was the badminton star Li Lingwei, who once trained Zhang Ning and Gong Zhichao.

The award ceremony full of inheritance also symbolized that the national feather women's singles flag was officially taken over by Chen Yufei.

Chinese women's singles has a very glorious history in the Olympics. It has achieved four consecutive championships. After Gong Zhichao was sealed in the Sydney Olympics in 2000, Zhang Ning won two Olympic women's singles championships in Athens in 2004 and Beijing in 2008. In 2012, the London Olympics. Li Xuerui was crowned, in which the 2008 and 2012 Olympic finals both staged the "Chinese Derby".

"It is a great honor to continue the glory of Chinese women's singles. We encountered a lot of difficulties after 2016. Standing on the podium today is actually an affirmation of our women's singles." At the press conference after the game, Chen Yufei ranked first. The words show the style of a general.

It is foreseeable that the future belongs to her in the badminton women's singles field.