Offensive defeats of Zamkovy and Khataev and an incredible comeback of Batyrgaziev: Russian boxers took their first medals at the Games

Andrei Zamkova and Imam Khatayev could not make it to the final of the Olympic tournament, losing to Cuban Ronel Iglesias and Briton Benjamin Whittaker, but won the first medals for Russia in boxing at the Games in Tokyo. Albert Batyrgaziev and Gleb Bakshi reached the semifinals with some difficulty, defeating Erdenebat Tsendbaatar and the Haitian Darrel Walsen, and guaranteed themselves bronze. In turn, Ivan Veryasov failed to join them, losing to Kazakhstani Kashymbek Kunkabaev. 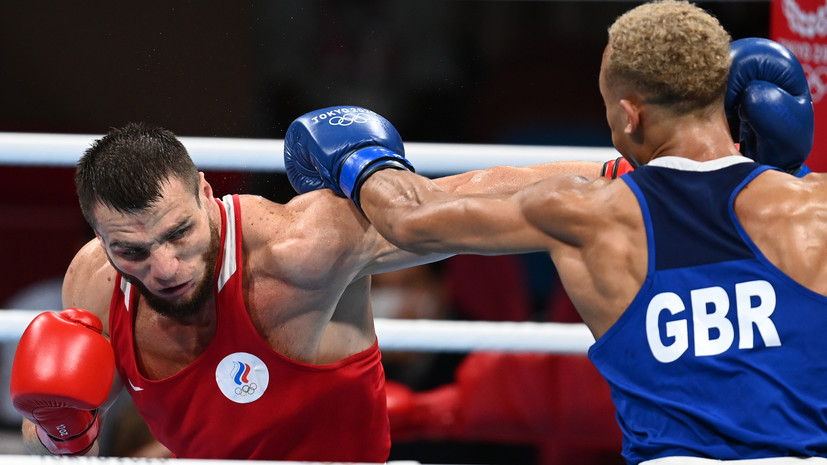 In boxing, the ninth competitive day of the Tokyo Olympics turned out to be quite eventful. In two weight categories, both the finalists and the winners of the bronze medals were determined, and in four more - the participants in the semifinal matches. With the exception of the women's flyweight, Russian athletes were represented in all divisions, with varying success in competing with strong opponents. Only two managed to succeed and proceed to the next round, while three stopped fighting in the tournament.

Until the onset of August, the Russian national boxing team could boast of an ideal performance in the men's tournament. If three domestic athletes were defeated in the first round in women's competitions at once, then the representatives of the stronger sex reached the quarterfinals without loss, and some have already managed to proceed to the next stage. In particular, welterweight Andrei Zamkova and light heavyweight Imam Khatayev, who were on the verge of battles for gold. It is all the more offensive that none of them managed to do it.

Zamkova met with experienced Roniel Iglesias, who has a record of gold in the London Olympics and bronze in Beijing. True, then the 32-year-old Cuban played in the lightweight division, and after moving into a higher category, he could only win the silver of the World Championship in 2017 and become the champion of the Pan American Games two years later. His meetings with the Russian were also not very successful. In June 2018, he took over, but subsequently lost twice, and the last time was in the quarterfinals of the 2019 World Championship in Yekaterinburg (1: 4).

This time the fight was extremely close. It cannot be said that Iglesias managed to outplay Zamkovy, but his speed and constant pressure could have made an impression on the judges. In the first two rounds, the Cuban gained a little more striking episodes, which could allow him to secure an advantage. In the final three minutes, Ronyel's main task was to avoid a knockout, which he easily coped with. All five referees gave him the victory, and one of them saw his superiority in every segment of the battle.

Unlike Zamkovy, Khataev first met with Briton Benjamin Whittaker. At the Olympics, the Russian boxing champion of the last two years managed to gain popularity after knocking out Gazimagomed Dzhalidov, representing Spain, and it is possible that many expected this from him in the semifinals. However, it was not possible to cope with the more titled and, most importantly, tall (11 centimeters taller) Briton.

The first round turned out to be very equal, which is confirmed by the referee cards. Three gave it to the Imam, and two to the opponent. But later they were much more unanimous, and mostly sided with Benjamin. And there are reasons for this. The 191-centimeter Whittaker got used to the ring and began to realize the advantage in anthropometry, which often plays a key role in boxing, and also defended well. In the remaining six minutes, Khataev could not really get into close range, and the blows fell either to the block or to the shoulder. Yes, the British could well be reproached for passive combat, but the officials did not have such questions for him.

Thus, Zamkova and Khatayev were defeated in the semifinals and lost their chances of winning gold, but did not remain without medals. According to the regulations, fights for third place are not held at the Olympics, as a result of which fighters who lose in the semifinals are automatically awarded bronze.

Also, three Russian boxers at once held their quarterfinal battles. And the first of them to enter the ring was the representative of featherweight Albert Batyrgaziev, who had a duel with Erdenebat Tsendbaatar. And the confrontation with the two-time champion of Asia turned out to be extremely difficult. It seems that the Russian did not expect such agility from the opponent and did not keep up with him for most of the fight. The extraordinary activity of the Mongolian helped him unanimously take the first round and win over the majority of the judges in the second. And it is extremely difficult to understand what exactly made the two of them give preference to his opponent.

Another Batyrgaziev entered the third round.

And in the middle of the segment, a flurry of punches led to the fact that the referee in the ring was forced to open an account and count the knockdown to the Mongolian.

This was the key episode of the duel that allowed Albert to make an incredible comeback.

As a result, two judges gave the victory to each of the opponents, and the third - Alejandro Barrientos - determined a draw.

However, the Cuban gave the final three minutes to the Russian for a clear advantage (10: 8), which was the decisive factor in determining the triumphant.

The domestic boxer went to the semifinals, where he will fight with the two-time medalist of the Games, Cuban Lazaro Alvarez.

Gleb Bakshi also had a difficult time. In the opposite corner was 21-year-old Darrell Walsen Jr., a US native representing Haiti. And the young athlete, although he did not have enough experience and skill to compete with the reigning world champion in middle weight, he had no desire and impudence. In the first round, he fearlessly entered the felling, and in the second he began to openly rude and hold the hands of the Russian, for which he was punished with a penalty point. Not to say that this is exactly what crossed out his chances of success, but significantly reduced them.

Thanks to Walsen, the third round also looked more like a wrestling competition, but that was good for Bakshi.

Such behavior of the Haitian could hardly be assessed positively, which was confirmed by the assessments of the majority of the judges.

Gleb confidently won all five of them on cards and made his way to the semifinals, where he will meet with the Brazilian Gebert Souza.

Unlike five of his compatriots, heavyweight Ivan Veryasov stumbled at the quarterfinals stage and was left without medals at the Tokyo Olympics, losing to Kashymbek Kunkabaev.

The native of Nakhodka failed the first round, played the next a little better and took the third, but this was not enough.

Only one of the five judges sided with him at the end of the fight.