Highlights of the event: weightlifting badminton and other points to compete for gold, China's gold medal hopes to surpass Rio 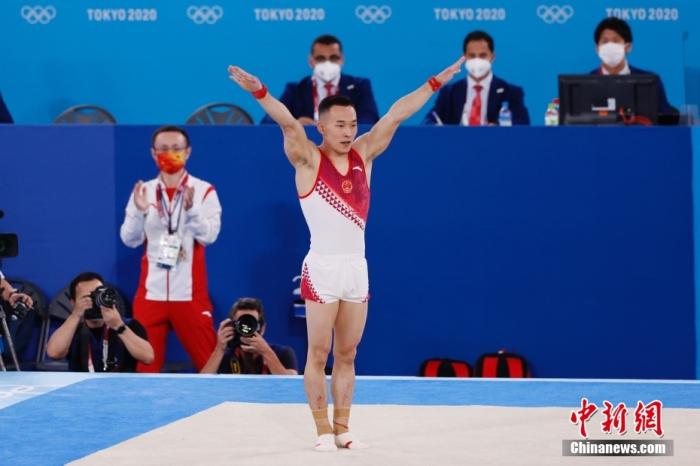 China News Service, Tokyo, August 1 (Reporter Wang Zumin) On the tenth day of the Tokyo Olympics (August 2), 22 gold medals will be produced, and China has multiple gold medals in weightlifting, badminton, cycling, gymnastics and other events. The Legion is expected to set off another gold medal climax, tying or even surpassing the 26 gold medals in the Rio Olympics in the total number of gold medals.

On the badminton final day, there will be two gold medals in women's doubles and men's singles.

In the women's doubles final, the world's third-ranked "mortal combination" will compete with the world's sixth, Indonesian player Polly/Rahayu for the championship.

After defeating the world's number one host's golden partner Yuki Fukushima/Ayaka Hirota 2:1 in the quarter-finals, the "mortal combination" is in full swing, and it is reasonable to win this gold medal.

As the only defending champion of the Olympic badminton arena, Chen Long will face the Danish star Anseron in the men's singles final.

In this Olympic cycle, the pattern of badminton men's singles has changed, and Japanese player Kento Momota has become the new overlord.

The latest IBF rankings show that Tao Tian Xian Dou is the first, Ansai Long is second, and Chen Long is sixth.

When Kento Momota missed the quarterfinals and this Olympic badminton men's singles formed a melee, Chen Long is expected to achieve re-election.

Compared with the badminton arena, the Chinese team is more hopeful to win the two gold medals that day in the weightlifting arena.

Wang Zhouyu in the 87 kg class is the double champion of the 2018 World Championships and the 2019 World Cup; although Li Wenwen in the 87 kg class is a "post 00", she is already the holder of 3 world records for the snatch, clean and jerk and total score , They will be the last two of the Chinese weightlifting team to play in this Olympics.

Prior to this, the Chinese team had won 1 gold medal for women and 4 gold medals for men's events, a total of 5 gold medals.

If the two women will win gold medals in the 2nd event, the Chinese weightlifting team will create the best results of all previous Olympics.

The track cycling competition kicked off on the 2nd, and the first women's team racing competition was the Olympic gold medal event of the Chinese team.

At the Rio Olympics, Zhong Angel’s partner Gong Jinjie won the championship and broke the world record, achieving a zero breakthrough in cycling Olympic gold medals for the "bicycle power".

For the Tokyo Olympics, Zhong Angel’s partner was replaced by the 23-year-old Bao Shanju.

But changing partners and not changing targets, the Chinese team will strive to defend the title in this project.

In the gymnastics arena, there will be three individual finals of men's rings, men's vaulting, and women's floor exercises. The Chinese team will hit the gold medal in the men's rings.

On August 1, Xiao Ruoteng, a player of the Chinese team, completed all the actions in the game.

On the same day, in the men's gymnastics floor exercise finals of the Tokyo Olympics, Xiao Ruoteng of the Chinese team won the bronze medal.

Liu Yang, who participated in the event, is the bronze medal member of the men's team at the Rio Olympics and the fourth place in the ring.

After the experience of this Olympic cycle, Liu Yang has the ability to win gold and is expected to win medals and even gold medals in this Olympics.

On the last day of the shooting event, there will be two gold medals for men's 50m rifle three-position and men's 25m pistol rapid fire.

The Chinese Gunners still hope to do more in these two projects where the Chinese team has won Olympic gold medals and medals.

Women's volleyball team competes for the first place in the final match of the group stage.

After four quarters of fierce competition, the Chinese team won 76:74 narrowly, achieved two consecutive victories and advanced to the quarterfinals.

The picture shows the women's basketball players celebrating their victory.

Although there is no worries about qualifying in the group, this game is still very important for both sides. If they can win and rank first in the group, they will occupy a relatively favorable position in the quarter-finals.

In the latest Olympic women's basketball strength list announced by the FIBA, the Chinese women's basketball team and the Belgian team ranked fourth and fifth respectively. This close match will surely be transformed into a fierce and exciting event.

It is also the last round of the group stage, and it has nothing to do with promotion, but the situation of the Chinese women's volleyball team and the women's basketball team is completely different. The Chinese women's volleyball team, which has missed the quarterfinals, will have a "battle of honor" with the Argentine team, which has also been eliminated early. A complete victory puts an end to this Olympic Games.

On July 31, in the women's volleyball group match of the Tokyo Olympics, the Chinese team defeated the Italian team 3-0.

The picture shows the Chinese team waiting to play.

The United States and Canada, Australia and Sweden will have a strong dialogue in the women's semifinals and compete for the seat of the final peak matchup.