This Saturday, July 31 was difficult for Côte d'Ivoire with the fourth place of Marie-Josée Ta Lou in the 100 meters and the elimination of footballers in the quarter-finals. The only good news ... 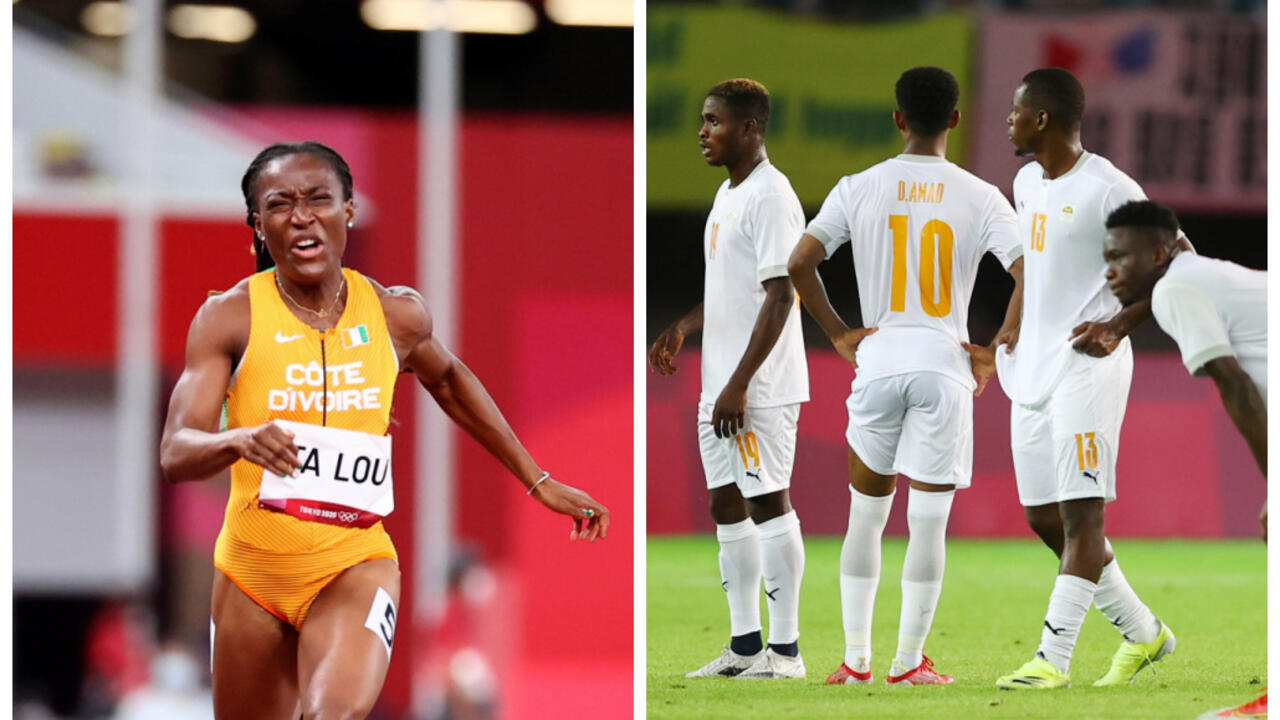 This Saturday, July 31 was difficult for Côte d'Ivoire with the fourth place of Marie-Josée Ta Lou in the 100 meters and the elimination of footballers in the quarter-finals.

The only good news for the Ivorians: the qualification of Arthur Cissé for the semi-finals of the 100 meters.

The other clarification came from the Angolan handball players who are relaunching for the quarter-finals.

The big disappointment for

As in the 2016 Games, the Ivorian took fourth place in the final behind the three Jamaicans Elaine Thompson-Herah, Shelly-Ann Fraser-Pryce and Shericka Jackson.

Inconsolable at the microphone of RFI after her race

, the three-time African champion, will try to grab a medal over 200 meters, from this Tuesday.

Ivorian sprinter Marie-Josée Ta Lou (in orange) finished 4th in the 100 meters final of the Olympic Games, this July 31.

As for the other Africans, the Nigerian Grace Nwokocha (11''07), the Gambian Gina Bass (11''16) and the other Ivorian Murielle Ahouré (11''28) failed to invite themselves among the eight finalists.

Nigerian Blessing Okagbare was suspended before the start of the semi-finals for testing positive for growth hormones.

qualified for the semifinals with a time of 56''06.

Algerian Loubna Benhadja broke her personal best, but her time of 57''19 does not open the doors to the semi-finals.

With the 6th time in the series, the

It also barely passed for the

The Burkinabè Marthe Koala, on the other hand, stops there.

There will be only one African middle-crosser in the final to hope to succeed the South African Caster Semenya: it is the

can still believe in the quarter-finals.

After three losses, they gleaned their first victory in Group B against Japan, the host country (28-25).

Angola are still 6th and last in the group, but mathematically, a place in the top four is still possible.

It will take a victory in the last game against South Korea on Monday and at the same time hope for a loss of the Japanese against the Norwegians.

Angolan handball players celebrate their victory against Japan on July 31, 2021 in Tokyo.

The two African teams engaged in the quarter-finals lost:

These Tokyo Games will remain a big disappointment for the D'Tigers.

Coming to Japan with many ambitions, fueled by prestigious victories in preparation against the United States and Argentina, the Nigerians left with three defeats.

After Australia and Germany, they were beaten by Italy (80-71).

Nigeria started very badly (29-17 in the first quarter) but turned everything upside down in the second and third quarters (22-11 and 24-16).

And while they were eight points ahead at the start of the fourth quarter (64-56), the Nigerians experienced a huge slump with… 24 points conceded consecutively!

With such a failure, it is impossible to hope for a miracle.

The D'Tigers finish last in Group B.

Hecatomb in the round of 16 in the under 52 kilograms: Cape Verdean Daniel David Varela de Pina lost his entry against Uzbek Shakhobidin Zoirov on points (5-0), Algerian Mohamed Flissi suffered a similar fate against the Filipino Carlo Paalam (5-0), just like the Ghanaian Tetteh Sulemanu against the Cuban Yosbany Veitia (5-0).

It was much tighter for Zambian Patrick Chinyemba, but he was still eliminated by Briton Galal Yafai (3-2).

Same berezina at light weights (less than 63 kilos) in the round of 16: Mauritian Louis Richarno Colin lost to Russian Gabiel Mamedov on points (5-0), like Namibian Jonas Jonas against Australian Harry Garside (5-0).

Tunisian sabers Amira Ben Chaabane, Yasmine Daghfous, Nadia Ben Azizi and Olfa Hezami did not make it through the round of 16 of the team event.

They finished this Olympic tournament in 10th place, one better than in 2016

South Africa leaves the Games without scoring a single point.

The South Africans suffered a final defeat against India (4-3).

With five defeats in five matches, they finished in last place in Group A.

The Kenyans suffered a fatal fourth setback in the playoffs.

Like Japan, South Korea and Serbia before it, the Dominican Republic dominated the sole African representative by a score of 3 sets to 0. Kenya is already eliminated even before playing their final Group A match against the Brazil Monday.

They were beaten in their third match of the preliminary round (Pool D) by Latvians Tina Graudina and Anastasija Kravcenoka (2 sets to 0).

They leave the competition with three setbacks.

He was thus classified 10th and obtained a place of second reservist which did not however open the doors to the final.

In the category of less than 81 kilos, the Tunisian Ramzi Bahloul ranked 4th and last in group B with a total of 300 kilos lifted (136 kilos in the snatch, 164 kilos in the clean and jerk).

In the category of less than 96 kilos, Cameroonian Cyrille Tchatchet II, representing the Olympic team of refugees, ranked 2nd in group B. He lifted 350 kilos (155 kilos in the snatch, 195 kilos in the clean and jerk), 9 less than Cuban Olfides Saez Vera.

Ghanaian Christian Amoah ranked 4th and penultimate with 315 kilos lifted (145 kilos in the snatch, 170 kilos in the clean and jerk).

The second round, started on Friday but interrupted by bad weather, ended on Saturday morning.

In the third round, Scott Vincent finished 19th this time, just ahead of Christiaan Bezuidenhout.

All have an appointment on Sunday for the fourth round.

On the second day and in the third session of the team and individual dressage, the South African Victoria Scott-Legendre, solo with her horse Valtho des Peupliers, placed 53rd.

A final heavy defeat before returning home: the South Africans were beaten by Greece for their last match in Group A (28-5).

With 11 goals scored and 92 conceded, South Africa has by far the worst record of any team ever eliminated in the first round in Games history.

South African water polo player Jason Evezard against the Greeks at the Olympics on July 31.

No more success for their compatriot Alzahraa Shaban with the 50m 3 position rifle.

The Egyptian finished 35th out of 37 in the qualifiers.

They have no chance of getting a medal.

The same goes for their compatriot Leo Davis in a Finn (heavy) single-handed dinghy after eight races, for the Tunisians Eya and Sarra Guezguez, last in the 49er FX single scull, and the other Tunisians Mehdi Gharbi and Rania Rahali in a mixed multihull - Nacra 17 with foils.

In the playoffs, seven sprinters from the African continent got their tickets for the semi-finals: the Nigerians

South African sprinter Akani Simbine ahead of Ivorian Arthur Cissé in the 100-meter series at the Olympic Games on July 31.

, bronze medalist of the last World Championships, set the fastest time of the series (1'43''75). He will be there for the semi-finals. The

also passes, as well as the

Ayanleh Souleiman (Djibouti) did not show up on the track.

No African jumper qualified for the final.

The South African Ruswahl Samaai signed only the 22nd best jump (7.74m, far from his personal best at 8.49m), and his compatriot Cheswill Johnson did not validate any mark.

Rugby: the French in silver at the Olympic Games in Tokyo 2021