The national athletics team runner, Mohamed Hassan Al-Nubi, made an honorable appearance yesterday in his first appearance at the 32nd Olympic Games, hosted by the Japanese capital, Tokyo, and will continue until the eighth of next August. The Nubian participated in the 100-meter sprint, where he was able to qualify 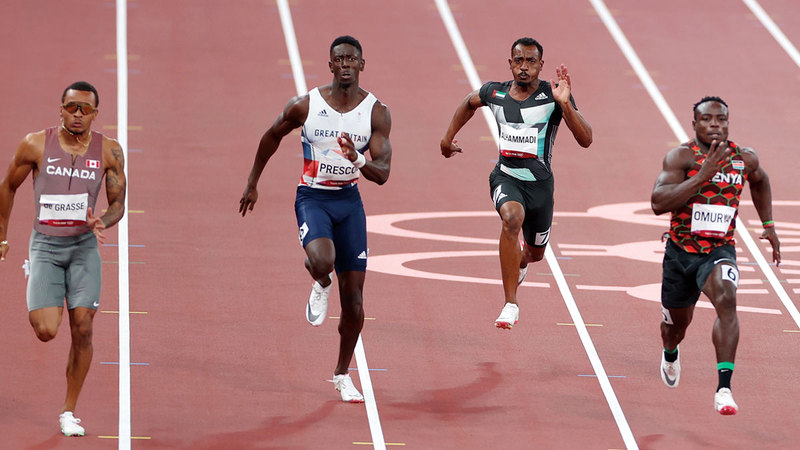 The national athletics team runner, Mohamed Hassan Al-Nubi, made an honorable appearance yesterday in his first appearance at the 32nd Olympic Games, hosted by the Japanese capital, Tokyo, and will continue until the eighth of next August.

Al-Nubi participated in the 100-meter sprint, where he was able to qualify from the preliminary round, before losing in the first qualifying round to reach the semi-finals. seconds, and finished eighth.

The Nubian is credited with his distinguished performance, determination to provide the best, his enthusiasm, and his passion for the importance of recording distinguished numbers, despite his participation with an invitation card and not through a qualifying number, as he scored the best personal number for him in the preliminary round, which witnessed a rise in temperatures.

In a press statement, Mohamed Al-Nubi confirmed that what he achieved in the Olympic Games in Tokyo will not be the end, in light of his keenness to develop his level and improve his performance through the application of a set of training programs, which he will implement under the supervision of specialized technicians in the Athletics Federation, noting that what is His preparation throughout the last stage had a great impact in achieving those positive results that he will not stop at, but will be a strong motivation towards more successes, and a step to crown the colorful medals at all levels.

Al-Nubi pointed to the need to define goals and objectives before each participation and the personal ambition that the athlete puts in mind in order to achieve them, explaining that the main goal of his participation in the Tokyo Olympics is to achieve a new number and make the best possible use of the multiple positives, to be in a forum the size of the Olympic Games. .

Al-Musallam added, in a press statement, that the UAE, with its unique facilities, facilities and infrastructure, represented one of the best options for sports decision-makers in the world, to hold major sports forums and benefits, which reflects its readiness to deal with any events it hosts with the participation of Many athletes from around the world.

Al-Musallam pointed out that among those important forums, not only at the level of the FINA agenda, but also at the level of the global sports movement agenda, is the World Championships for short distance swimming (25 meters), which will be hosted by Abu Dhabi with the participation of 1,000 male and female swimmers, next December, where The attention of all followers and fans of swimming is directed to watching the world champions and Olympic champions on the soil of the UAE, which we are proud of being one of the active success partners of "Fina".

The president of the International Swimming Federation added that many of the champions and athletes participating in the Olympic Games, which are currently held in Tokyo, have spent preparation periods and camps in the Emirates in preparation for the Olympic forum, noting that there are some programs and initiatives that the International Federation will put forward in cooperation and coordination with the National Olympic Committee, Including the “Swimming Literacy” program, which will address some important aspects related to raising the necessary awareness and education on the benefits of swimming, whether from the health or psychological aspect, in addition to achieving safety and security for all sports practitioners.

The Organizing Committee of the Olympic Games in Tokyo stressed the need for sports delegations to leave after the end of their competitions, in order to ensure their safety and limit the spread of infections with the “Covid-19” virus.

Al-Nubi qualified in the preliminary round, yesterday, and scored 10 seconds and 59 parts of a second, before losing in the final qualifying round.