Without Medvedev in the semifinals, but with awards in the mixed doubles: Khachanov and three Russian couples will compete for Olympic medals

Karen Khachanov defeated Yugo Yumber in three sets and made his way to the semifinals of the Tokyo Olympics in singles. For reaching the decisive stage, he will compete with Pablo Carreno-Busta, who sensationally knocked out Daniil Medvedev from the fight. In the mixed doubles, two Russian couples continue to fight for medals at once. Anastasia Pavlyuchenkova and Andrei Rublev beat the Japanese Enu Sibahara and Ben McLachlan, and Elena Vesnina and Aslan Karatsev beat the Poles Igu Svyontek and Lukash Kubot. 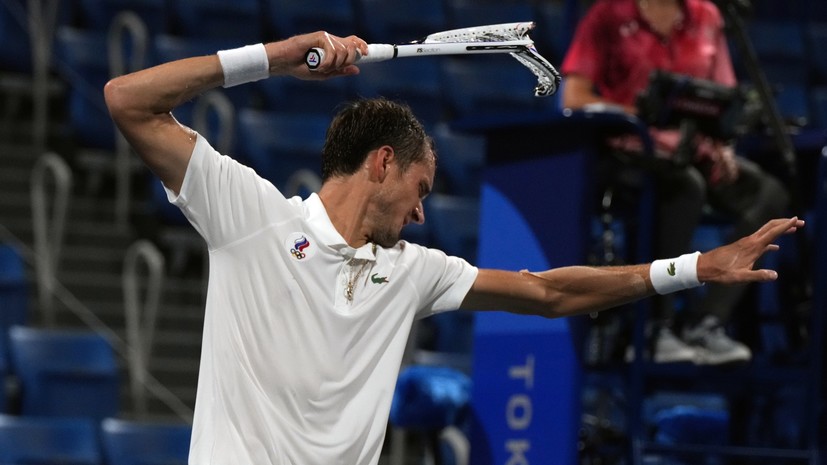 On the sixth day, the organizers of the Tokyo Olympics nevertheless listened to the opinions of tennis players and changed the competition schedule due to the heat.

If earlier athletes were forced to go to court at 11 am local time, this time the first matches started four hours later.

The chance to be one of the first to test himself in the new conditions fell to Karen Khachanov, who met with Yugo Yumber in the quarterfinals.

And the Russian was satisfied.

Of course, they had to change their outerwear at the same frequency, but in general the athletes began to feel much more comfortable.

It turned out to be much more pleasant to play, the sun was not as scorching as on other days.

It is good that the organizers met halfway, "RIA Novosti quotes Khachanov.

Nevertheless, this did not make the meeting with Yumber any easier for Khachanov. In the previous round, the Frenchman had already managed to present a sensation and break the resistance of the fourth racket of the world, Stefanos Tsitsipas, so the match with the 25th tennis player of the planet did not frighten him at all. And he demonstrated this in the first game, losing only in a tie-break. And this despite the fact that Jugo made ten more unforced mistakes (21:11) and in general often acted in an overly attacking manner.

One of the main features of the meeting was the confident play of both opponents on their own serve. For two, they managed to make only two breaks, which predetermined the outcome of the confrontation in the second and third sets, respectively. Moreover, if Khachanov had 11 chances to catch on at the reception, then Yumber had only one. This speaks of the excellent implementation of the Frenchman, on the other hand, the overall superiority of the Russian.

By tradition, Karen slowed down a little in the middle of the meeting and gave the second set, but in the third he appeared to be an almost ideal tennis player from all points of view. 82% of hitting the first ball, 91% of successful rallies on service and 37% on reception (especially impressive compared to 9% for Yugo). In addition, he won ten points due to his activity and made only one unforced error. All this together helped Khachanov to take his only game at the reception, and subsequently did not allow Humber to impose a fight - 7: 6 (7: 4), 4: 6, 6: 3.

“A good, tenacious match with only two breaks.

I am very glad that I was able to keep my serve and put the squeeze on Humber in the third set.

Now I want to watch a match with the participation of my potential rivals in the semifinals.

Of course, I will root for Danya Medvedev, ”the official Telegram channel of the Russian Olympic Committee quotes Khachanov.

It would seem that the change in the schedule should have helped Medvedev to demonstrate his best tennis at the Olympic tournament and provide Russia with a medal in the men's singles category.

But apparently, a series of grueling duels in the heat of Tokyo took too much of his strength, so in the match with Pablo Carreno-Busta, he appeared not like himself.

Already in the first game, he began to experience health problems, and even a ten-minute break did not help to change the course of the confrontation - 2: 6, 6: 7 (5: 7).

Imperfect health forced the second racket of the world to force the course of rallies over and over again and led to a huge number of inaccuracies. In the first game, the ratio of actively won balls and unforced errors was unsatisfactory (6:11), which, with a low percentage of hits with the first ball on service (48%), led to two lost innings. Daniel himself did not earn a single break point, although at the reception he regularly created problems for Carreno-Bust.

The pause between sets gave Medvedev the opportunity to catch his breath and overload.

At first, he confidently took the game on his serve, and then on the reception, but the effect was short-lived.

Three won rallies at the start and a number of hits in the line infuriated Daniel so much that he exclaimed in his hearts: “He has never played like that in his life,” accompanying all this with obscene language.

Medvedev still managed to catch up with Carreño-Busta and fought to the last for victory in the second set, but another series of mistakes canceled out all his efforts.

The Russian lost his chances of winning an Olympic medal, and the Spaniard got a ticket to the semifinals, where he would fight with Khachanov.

“The first tournament in my life, where I play not for myself, but for the country.

Therefore, it is a shame and a shame that I did not manage to show the result that I am capable of.

I think there is a chance for a Russian final in the mixed doubles.

It is impossible to predict, but there is a chance, ”TASS quoted Medvedev as saying.

And there was reason to hope so.

At least after Anastasia Pavlyuchenkova and Andrei Rublev not without difficulty, they still coped with the hosts of the competition - Ena Shibahara and Ben Maclachlan.

Despite the difference in skill level, the Russians had to work hard and spend almost two hours on the court.

This is due to 20 unforced errors at once (12 more than the opponents), which forced them not only to suffer in the first, but also to concede the second set.

Domestic tennis players failed the start of the tie-break, and then gave up the fight altogether, having given seven rallies in a row.

In the final game, I still managed to pull myself together and stop giving points to opponents.

Rublev and Pavlyuchenkova did without a single unforced error, but still could not avoid the hassle.

During the press conference, Rublev jokingly said that he felt like a loser, as he was forced to fight for the Olympic medal in mixed doubles, after being eliminated from the singles category.

But Pavlyuchenkova did not agree with him.

“Andrey is in his own style.

For me, every match is tough, I fight for everything.

And the medal of the Olympics, she is a medal, in any category, so we are not losers, ”said the tennis player.

A few hours later, Elena Vesnina and Aslan Karatsev made a step towards the Russian final in the mixed doubles.

They were to meet with a more eminent Polish couple - the Roland Garros triumphant Iga Swiontek and the experienced greenhouse Lukasz Kubot, but their regalia did not affect the result.

The Russians solved all the issues in less than an hour and a half and proceeded to the next round.

The Poles staked on defense and preferred to wait for missteps from their opponents, but this tactic did not bring them success.

Yes, Svyontek and Kubot made less mistakes (12:20), but the difference in active goals won was much larger - 28:14 in favor of Vesnina and Karatsev.

The bold style of play of domestic tennis players became the key to victory and allowed them to succeed three times in reception.

It is noteworthy that the first two rackets of the world will try to prevent the organization of the Russian final.

Pavlyuchenkova and Rublev will have a meeting with Australians Ashley Barty and John Pearce, and Vesnina and Karatsev - with Serbs Nina Stoyanovic and Novak Djokovic, who still has chances to win Olympic gold in two types of programs.

Until recently, Vesnina had a similar opportunity, but hopes of winning two medals at the Games were dashed by the Czech duet in the person of Barbora Kreichikova and Katerina Sinyakova.

It is all the more offensive that until now Vesnina has shared the court with Czech women three times in doubles and has never allowed them to take over. In 2016 and 2018, they, together with Ekaterina Makarova, stopped them at Roland Garros and the Australian Open, respectively, and three weeks ago (together with Kudermetova) they were not allowed to make it to the Wimbledon semifinals. But this time everything was decided by the low implementation of break points (1/6) and the abundance of unforced errors (30).

“I think (tie-break is) a lottery, and that is not fair to all players who play in pairs.

There has always been a full set at the Grand Slam tournaments and the Olympics.

But our rivals played it very successfully and cleanly ... They served incredibly accurately, it was very difficult to oppose something.

We tried, but it didn't work out a little.

In a tie-break, the score goes away quickly, you can't grab hold of it.

It's a shame, ”admitted the Olympic champion of Rio de Janeiro.

Now Vesnina and Kudermetova will have to focus on the bronze medal match, in which they will be opposed by the Brazilian duo - Louise Stephanie and Laura Pigosi.

In the semifinals, they lost in two sets to the Swiss Belinda Bencic and Victoria Golubic.