How mature are the spectators of this Olympic Games? I have learned how to do it myself...

On July 29, local time, in the women's singles semifinals of the Tokyo Olympic Games, Chinese player Sun Yingsha easily defeated Japanese player Mima Ito 4-0 and successfully advanced to the final. Prior to this, another Chinese player Chen Meng had entered the final, and the Chinese team had secured the Olympic table tennis women's singles gold medal in advance. Photo by China News Agency reporte 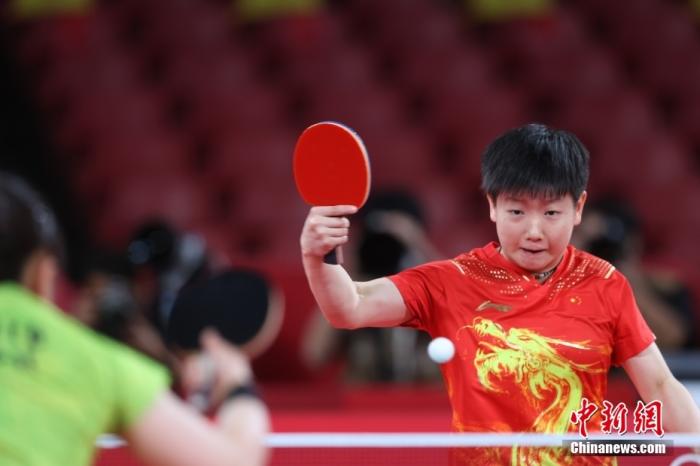 Prior to this, another Chinese player Chen Meng had entered the final, and the Chinese team had secured the Olympic table tennis women's singles gold medal in advance.

Chinanews client, Beijing, July 29 (Reporter Xing Rui) After the Tokyo Olympics started, while athletes struggled on the field, the "people eating melons" were not idle.

Regardless of the color of the medal, netizens will always give applause and encouragement to those athletes who do their best.

A noteworthy phenomenon is that when the athletes lose the game, we see

. This year's netizens actually learned to "find the reason from themselves"...

In the previous national table tennis mixed doubles final, after the "Xin Wen Lianbo" combination fought hard for 7 rounds, it was regrettable that they lost to Hayat Mizutani and Mima Ito.

After the game, netizens deeply reflected on their "mistakes."

this year's netizens are really sensible and distressing

In order to give full play to their "poisoned milk physique", some netizens actively asked Ying to watch the Japanese table tennis team.

Sure enough, the Japanese men's table tennis singles were "annihilated"; in the women's singles, Kasumi Ishikawa was upset and eliminated, and Mima Ito was beaten and cried by Sun Yingsha...

Of course, simply reflecting on oneself will not solve the problem, you have to figure out how to deal with it.

As a result, women's volleyball fans thought of "the mysterious power from the East."

Some fans said that he went to the temple in the morning to burn incense and worshiped the Bodhisattva.

Some people braved the typhoon to make a wish to the Guanyin Bodhisattva of the South China Sea across the sea.

There are more devout fans who are willing to use their son to win the women's volleyball championship for 15 years... I just want to ask: Does your son know?

As the Chinese women's volleyball team lost to the Russian player 2:3 in five rounds on the afternoon of the 29th, the guy may have taken a sigh of relief.

Seeing that everyone is so sincere, the editor also wants to make a wish: If the women's volleyball team who is currently in a desperate situation can win the championship by miracle, the editor would rather not raise wages for three years!

Talking and laughing, in fact, since the beginning of the Olympic Games, everyone has become more and more aware:

We are no longer just about performance

Even for players who have been eliminated or made mistakes on the field, netizens always praise and comfort them.

Recall that on May 19, 1985, after the national football team lost to the Hong Kong team and missed the World Cup, the then national football coach Zeng Xuelin received stinky socks, twine and shoelaces from the fans.

After many years of recalling the past, the old man said, "I have two major pains in my life, one is the death of my lover, and the other is the '5•19 incident'."

There is also the "Prince of Chinese Gymnastics" Li Ning. After losing the Seoul Olympics with injuries, someone even sent him a blade and rope because of his smile when facing the camera, hoping that he would apologize with death.

In fact, in the arena, victory or defeat is a matter of military affairs.

Losing a game is no big deal. You don't have to stand on the moral high ground to criticize athletes for embarrassing the motherland just because they missed the podium.

Some people may ask: Does the gold medal matter?

The gold medal is of course important

. It is the symbol of the highest honor in an athlete’s career and the best return for the athlete’s hard training; it is the embodiment of the Olympic motto "higher, faster, stronger, and more united", and it is also the people of all ethnic groups in the country. To a certain extent, the number of gold medals can also reflect the strength of a country’s sports strength.

gold medal is not that important

With the strengthening of the motherland and the improvement of people's self-confidence, we no longer need to use Olympic gold medals to demonstrate the strength of a major country.

When the utilitarianism of "gold medal theory" is abandoned, sports can return to its purest essence.

Victory is not arrogant, defeat is not discouraged, we do not over-interpret victory and defeat, nor blindly ignore the gap.

If we win, we want to celebrate, and we must earnestly summarize if we lose; we are not "only gold medalists", but we will not lose our desire to win.

Perhaps this is a manifestation of the maturity of Chinese sports culture.