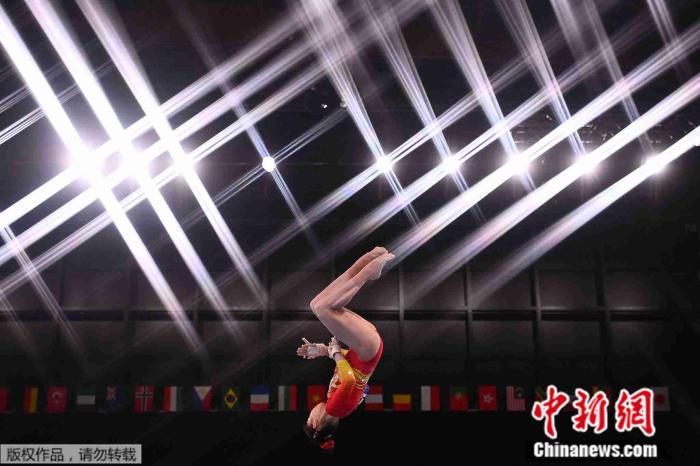 The Chinese team failed to show their best form and finally ranked seventh with 161.196 points.

The Russian Olympic Committee team won the gold medal with 169.528 points, and the US team won the runner-up.

Chinese players are in the game.

The Chinese team won the bronze medal in the Rio Olympics five years ago.

The lineup of the Chinese team consists of four players, Tang Qianjing, Lu Yufei, Zhang Jin, and Ou Yushan, all of whom participated in the Olympic Games for the first time.

In the qualifying round, they scored 166.863 points with their stable performance and advanced to the third place.

In the finals, the eight teams were divided into four groups.

The Chinese team and the French team are in the same group. The first item is the uneven bars. Ou Yushan, Tang Qianjing and Lu Yufei played successively.

Ou Yushan had flaws in the connection of the set of actions. Lu Yufei made a weapon drop error, and the two scored slightly lower.

After the first round, the Chinese team accumulated 41.066 points, lagging behind the French team in the same group.

Although the start was unfavorable, Zhang Jin, Tang Qianjing, and Lu Yufei withstood the pressure on the second balance beam, and the three combined to score 41.599 points, which is also the strength of the Chinese team.

After this round, the Chinese team overtook the French team.

In the third round of free exercises, Tang Qianjing, Zhang Jin, and Lu Yufei performed normally, but the completion points were slightly lower. The three players scored 39.165 points in total.

In the last round of vaulting, Ou Yushan and Tang Qianjing made mistakes when they landed. Only Zhang Jin played normally.

The Chinese team finished with a total score of 161.196 points, which was 5.667 points lower than the qualifying time.

Regarding this result, Zhang Jin said frankly after the game that he would be a little bit disappointed, but everyone has worked very hard.

Ou Yushan believes that the mistake is because of her lack of self-confidence.

During the game, Lu Yufei fell heavily on the uneven bars due to a drop of equipment.

After that, she adjusted quickly, and her balance beam and free exercise performance were very good.

Regarding everyone's concern, she responded after the game: "Thank you, I have nothing to do. After the fall, I adjusted myself and continued to do it." Lu Yufei believes that the mistake is due to the lack of mastery of the rhythm.

Tang Qianjing revealed that the team atmosphere is still very good, "There will definitely be tension in the game, but first of all, I didn't do well and didn't let go." She said that there will be individual matches in the follow-up, and she will not think about what happened today. I will focus on the next game and wait until everything is over before resuming the game seriously.

According to the schedule, on the 28th, the Tokyo Olympic gymnastics men's all-around final will be contested. Chinese players Xiao Ruoteng and Sun Wei will play. (Finish)