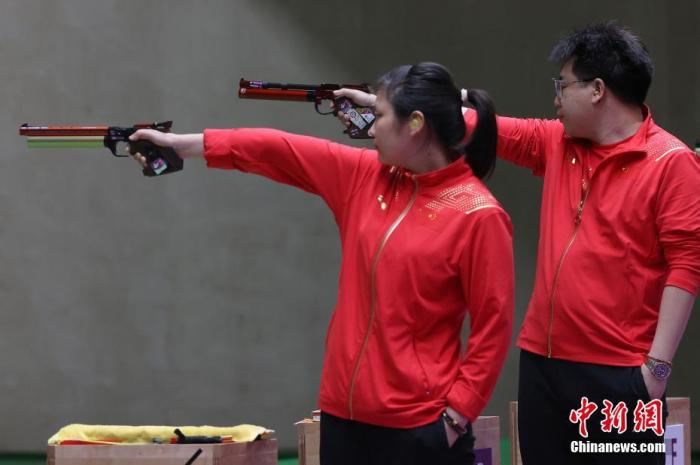 The 10-meter air pistol mixed team is a newly established Olympic event. A total of 20 teams participated this time.

In front of the TV set at Pang Wei's home in Baoding City, Hebei Province, Pang Wei's family was nervous about the competition. Pang Wei's mother, Cai Dongfang, even hid and did not dare to watch the game.

But all the anxiety, with the announcement of the final shot results, turned into cheers and joy.

"The child has survived so many years of pressure." Pang Wei's father, Pang Yanhong, couldn't help but sigh.

Once Pang Wei was a genius boy in the eyes of the world. "Debut is the pinnacle": In 2006, the 20-year-old Pang Wei represented China for the first time in an international competition and won the 10m air pistol World Championship in one fell swoop; two years later in Beijing in 2008 At the Olympics, he took part in the Olympics for the first time and won the gold medal again and became famous in World War I.

However, after "reaching the sky in one step", the Hebei nationality player gradually faded out of public view.

Although still a frequent visitor to world-class competitions, no dazzling results prove that he is still a sharpshooter.

In the 2012 London Olympics, Pang Wei only ranked fourth.

In the 2016 Rio Olympics, his result was a bronze medal.

"After experiencing the setbacks of the two Olympics, he was under a lot of pressure." Pang Yanhong recalled that after a period of downturn, due to injuries and in order to be able to spend more time with his family, Pang Wei lived a semi-retired life. A shooting instructor.

However, as the traditional advantage of the Chinese team, the male air pistol has not achieved satisfactory results in recent years.

Facing the Tokyo Olympics, the Chinese men's 10-meter air pistol event even faced the dilemma that no one can provoke a leader.

At the beginning of 2019, Pang Wei, who had not trained for more than two years, chose to pick up the pistol again and continue to fight on the field.

"I still have some feelings, and I want to come back and fight again. Especially since our project has encountered many difficulties in recent years, I also hope to contribute to the project." Pang Wei once told the media.

At that time, he was 33 years old, facing family, injury and many other problems, how to return to the competitive state as soon as possible is the key.

"It's really not easy for him to persist until now." Zhang Shengge, the coach of Pang Wei in the provincial team and deputy director of the shooting and archery management center of Hebei Sports Bureau, said that high-level shooting athletes like Pang Wei need to play at least 40,000 a year. Multiple bullets.

As a 30-year-old veteran, he has to overcome the problems of waist and cervical spine injuries, as well as closed training under the new coronary pneumonia epidemic, and family difficulties.

"Since the closed training, he has only seen the child three times in total, and the child is only in the third and fourth grades."

If you win another gold medal, will you continue to play?

Pang Wei did not answer clearly after the game.

Earlier, when he was interviewed by the media, he talked more about the hope that more athletes will grow up as soon as possible, because "in this way, there is hope for this project in our country."

However, Zhang Shengge revealed that after the Tokyo Olympics, Pang Wei will be involved in preparations for the 14th National Games this year.

Pang Wei's future is to be continued.

But now, his mother Cai Dongfang is even more expecting her son to go home and "hug him", and then make him a meal of fennel stuffed dumplings that he loves.