The day after the opening ceremony of the Tokyo Olympics, the African athletes involved experienced varying fortunes on Saturday. In boxing, they took convincing first steps ... 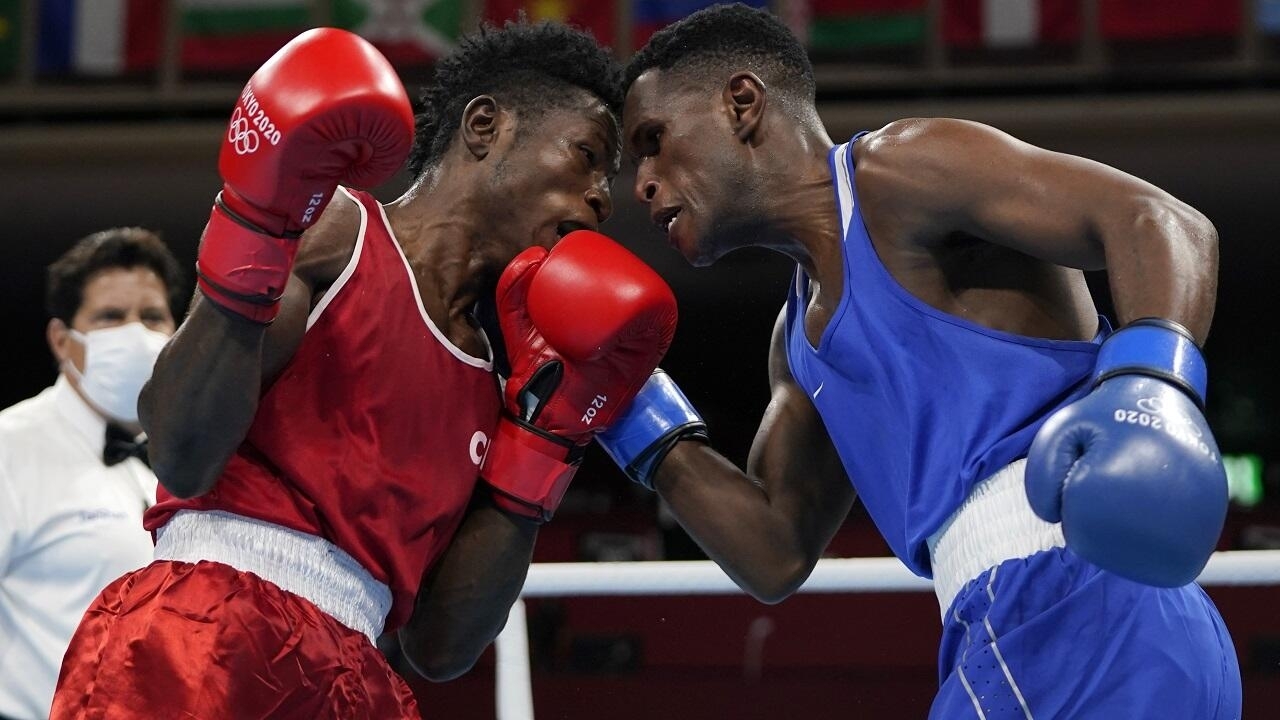 The day after the opening ceremony of the Tokyo Olympics, the African athletes involved experienced varying fortunes on Saturday.

And the Tunisian Mohamed Khalil Jendoubi has gleaned a silver medal in taekwondo.

In other sports and disciplines, it was more complicated.

climbed to the round of 16 in the under 69 kilos (welterweight).

The 22-year-old boxer won his fight against Eswatinian Thabiso Dlamini after the referee stoppage on the third round.

He will face Irishman Aidan Walsh on Tuesday.

, also qualified for the next round thanks to their victory in points, respectively against Canadian Wyatt Sanford and Samoan Marion Faustino Ah Tong.

In the category of less than 91 kilos (heavyweight),

validated his ticket for the round of 16 by beating the Uzbek Sanjar Tursunov (4-1).

On Tuesday, he will face Russian Muslim Gadzhimagomedov.

Disappointment on the other hand for the Kenyan Nicholas Okoth, beaten in the first round in the under 57 kilos (featherweight) by the Mongol Tsendbaatar Erdenebat (3-2).

At 38, the 2017 African amateur boxing champion yearned for much better.

Very little was played out as two out of five judges named him the winner.

Among women, in the category of less than 57 kilos (featherweight), the Congolese Marcelat Sakobi Matshu was eliminated from the start, in the round of 16, by the Philippine Nesthy Petecio (5-0).

Among women, in the category of less than 49 kilos, the Moroccan Oumaima El Bouchti, sharply beaten by the South Korean Sim (19-10), and the Egyptian Nour Abdel Salam, dominated by one point by the Turkish Yildirim (21-20), stop as soon as they enter the running.

On the men's side, Tunisian

won the silver medal after his narrow loss in the under 58 kilograms final against Italy's Vito Dell'Aquila (16-12).

He is the first medalist of the African continent in these Games, and the first Tunisian silver medalist since 1972.

Spectacular match from the Zambian women

This is Zambia's first point in its Olympic history.

And the hopes of qualifying for the quarter-finals still exist.

Good entry into contention for the

The Pharaohs, reigning African champions, beat Portugal (37-31), their first opponent in the first round in group B. Egypt is second in its group before facing Monday against Denmark, Olympic champion in title.

In the 400m freestyle, only

, 18, qualified for the final scheduled for Sunday.

The Mozambican Igor Mogne, the Botswana James Freeman and the Egyptian Marwan Aly Elkamash remained at the dock.

In the 100m butterfly, the South African Erin Gallagher and the Egyptian Farida Osman will not see the semi-finals.

They finished last in their respective series.

In the 100m breaststroke, the Malian Sébastien Kouma, the Sudanese Abobakr Abass and the South African Michael Houlie could not qualify for the semi-finals.

Their journey stops as soon as the series.

Cyclists competing in the road race at the Olympic Games in Tokyo, July 24, 2021. Pool via REUTERS - Tim de Waele

In the under 48 kg category, the two African representatives, Malawian Harriet Bonface and South African Geronay Michaela Whitebooi, were eliminated in the first round by Brazilian Chibana and Argentina Pareto.

The Egyptian Maiar Sherif, 118th in the world, did not surprise in the first round against the Swedish Rebecca Peterson, 59th in the WTA.

Tunisian Ons Jabeur will enter the competition this Sunday against Spain's Suarez Navarro.

In saber, the Algerian Arkam Bounabi was beaten by the Japanese Kaito Streets (15-9) in the first round.

In the 32nd finals, the Tunisian Fares Ferjani lost against the Italian Enrico Berrè (15-10), like the Egyptian Mohad Samer against the Georgian Sandro Bazdadze (15-10).

On the other hand, still with the saber,

tamed the American Daryl Homert (15-11) and the Russian - under neutral banner - Veniamin Reshetnikov (15-13) respectively in the round of 16.

The next turn was fatal to them.

And after Mohab Samer, Sandro Bazdadze was the executioner of Ziad Elssisy (15-12).

In épée, on the women's side, Senegalese Ndeye Binta Diongue lost to Chinese Sheng Lin in épée in the first round (15-6).

In the same discipline, the Tunisian Sarra Besbes, she lost little against the Italian Federica Isola (14-12).

placed eleventh and last in the under 49 kg category, after lifting 73 kg in the snatch then 91 kg in the clean and jerk (164 kg in total).

The Chinese Zhihui Hou won the gold medal with a total of 210 kilos, a new Olympic record.

Three other competitors failed to rank (failures in the snatch or the clean and jerk).

In the men's draw, it's a zero point on Saturday. Togolese

fell in the first round, respectively against Croatian Andrej Gacina and Singaporean Zhe Yu Clarence Chew. Tunisian Adam Hmam was no more successful against Ukrainian Lei Kou. Finally, the Nigerian Olajide Omotayo was beaten by the Portuguese Tiago Apolonia, and the Algerian Larbi Bouriah could not do anything against the Hungarian Bence Majoros.

saved the honor by taking out the Hungarian Dora Madarasz (4 sets to 1).

The Egyptian Yousra Helmy stops in the first round, beaten by the French Jia Nan Yuan (4 sets 0).

Tunisian Fadwa Garci, Nigerian Olufunke Oshonaike and Cameroonian Sarah Hanffou were also ruled out in the preliminary round.

In mixed doubles, the only African pair in contention, bringing together the Egyptians Omar Assar and Dina Meshreff, was released in the first round by the South Koreans Sangsu Lee and Jihee Jeon (4-1).

A defeat far from crippling for the Tunisians who will have to finish among the top four of their group of six to see the quarter-finals.

The double African champions will play their second match against the France team on Monday.

The Egyptian Alzahraa Shaban and the Algerian Houda Chaabi failed to qualify for the final in the rifle shooting at 10 meters.

Only the first eight got their ticket to the final won by the Chinese Qian Yang, the first gold medalist of these Games.

In the men, with the pistol at 10 meters, the Egyptian Samy Abdel Razek and the Tunisian Ala Alothmani finished 31st and 34th of the qualifications.

The final was won by Iranian Javad Foroughi.

The men lost their first playoff game (Group B) to Great Britain 3-1.

The women were beaten by the Irish (2-0) in Group A. Next match for the men's team: the Netherlands on Sunday.

The South African women's team lost heavily against Spain for the first match in its history at the Olympic Games (4-29).

After the reigning vice-world champions, the South Africans will face more affordable Canadian women on Wednesday.

They will have to finish in the top four of their group of five to get their ticket to the quarter-finals.

In single sculls, the Moroccan Sarah Fraincart, the Nigerian Esther Toko, the Ugandan Kathleen Noble, the Togolese Claire Ayivon and the Sudanese Esraa Khogali did not make the round of repechage.

In the quarter-finals, Sunday July 25,

will be the only African representative.

She qualified in the playoffs on Friday.

Still on the single scull, on the men's side, the Ivorian Franck N'Dri and the Beninese Privl Hinkati did not get through the repechage round either, unlike the

He will be present in the quarterfinals on Sunday, like the

, who qualified directly in the qualifiers played on Friday.

In men's two, South Africans Luc Daffarn and Jake Green finished last in their qualifying series and will play in the repechage on Sunday.

In women's doubles, the Egyptian Doha Hany and Hadia Hasny lost to the Japanese Mayu Mastumoto and Wakana Nagahara (2 sets to 0) in the preliminary round (group B).

No more success in mixed doubles for the Egyptian pair Adham Hatem Elgamal-Doha Hany against the Chinese pair Si Wei Zheng-Ya Qiong Huang (2 sets to 0) in the preliminary round (group A).

Tokyo 2021-Judo: Luka Mkheidze in bronze, first medal for France in these Games