The mistake that cost Adriana Cerezo the gold: "I was wrong"

&amp; quot; I got inside instead of out of the way, let my guard down, he threw a fist at me to equalize and then he hooked me with the kick ... There were only five seconds left and I couldn't ... 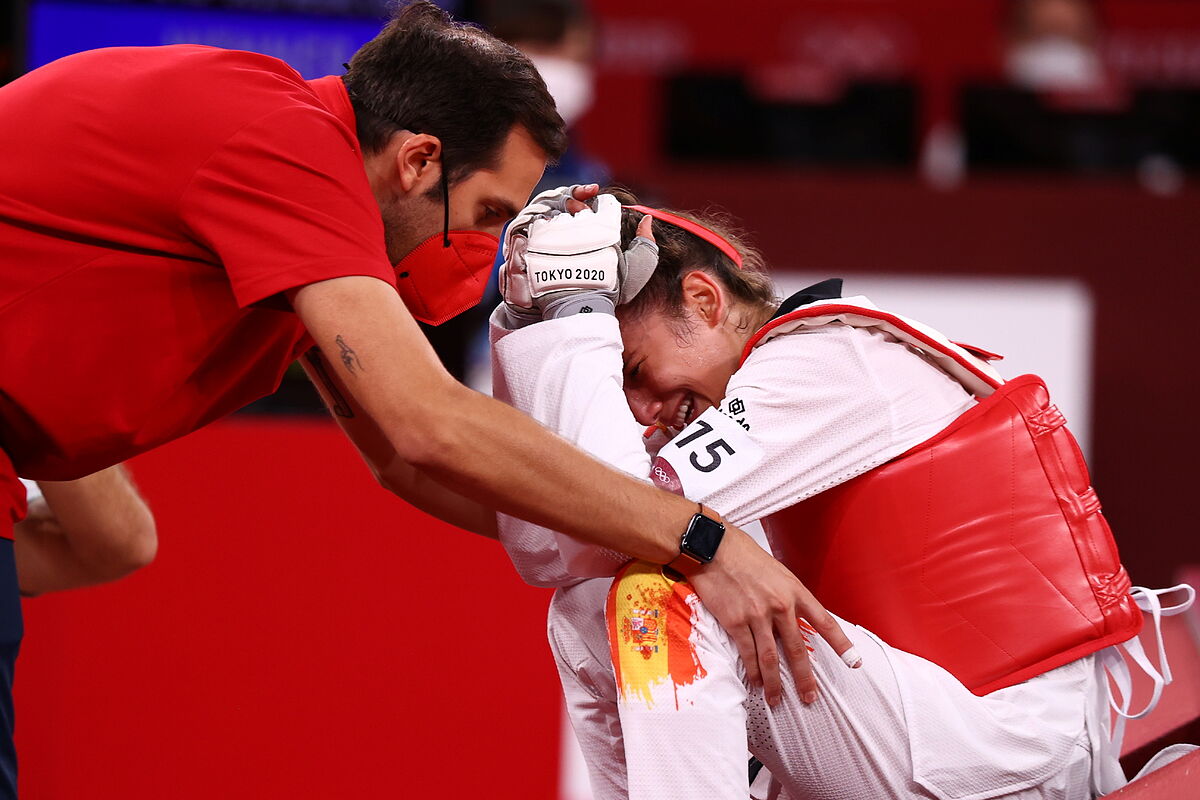 "I got inside instead of moving away, I lowered my guard, he threw a fist at me to tie and then he hooked me with the kick ... There were only five seconds left and I couldn't come back. I actually threw a fist at him, I thought he had gone up to the scoreboard, I turned to look at him and there I ran out of time. I was wrong and when I spoke with my coach, the first thing I told him was that I am sorry. I tend to give in right now, in the last moments, when I'm already tired. It's something I have to improve. I'm going to be watching those last seconds for a long, long time. I have to learn from this, "

about the movement that left her without the gold, the gold of her life, in the Tokyo Games.

She spoke with a silver pendant at 17 years old, an unexpected success for all but her, but it mattered relatively to her. "I have won a silver, but I have lost a gold", analyzed after falling in the final moments before the Thai

and repeated over and over, over and over again, the same response to those who congratulated her: "Thank you, but good ... ".

With her lucky pink ribbon still in her hair - "I wanted to take it off for the podium and I have forgotten it" - and a half smile, for the first Spanish medalist in Japan the historic day was "a bittersweet day". One movement, one single movement, snatched "the medal he wanted." "They tell me that I am only 17 years old and it is true that I am only 17 years old, but if I were 20 I would think the same thing. I am happy for the money, I am not sad, but there is a part of me that tells me that I cannot enjoy myself. something to do and I have not done it, "added Cerezo in a mixed zone that, for her, was complicated.

The atmosphere was celebratory, but it was not for parties.

The directors of the Spanish Olympic Committee and the Spanish Federation encouraged her and thanked her as much as she could.

Excited family members were waiting for her on the radios on the other end of the phone and what she really wanted was to call her coach,

, and analyze what had happened.

"I suppose that tomorrow I will get up and give a little more importance to silver, but I think it will take a while to celebrate", assumed Cerezo with a strange closing for a day that was really of joy, of absolute joy.

And it is that until his silver defeat, in the previous nine hours, in the three previous fights, Cerezo had enjoyed like no one else. In his Olympic debut, he appeared at Tokyo's Makuhari Messe Hall, a gigantic convention center, bursting with laughter and waving to the stands, where there were only half a dozen coaches and federationals. "Quick, Adriana!", "Hard, Adriana!", The technical director,

demanded in the fighting

, gold in the 1992 Barcelona Olympic Games -when taekwondo was on display-, and the young woman, whether he listened or not, he complied. "I have been lucky because, although there was no public, I had people who encouraged me," he acknowledged.

From the moment he arrived at the pavilion until the final kick from Wongpattanakit, Cerezo enjoyed it, go if he enjoyed it, and only stopped the enjoyment for a few moments of seriousness. Between rounds and rounds, his coach was absent from the Games due to coronavirus restrictions, he sat on the bench chair, closed his eyes and meditated. It wasn't

, a technique he uses in his workouts. What was he thinking? "I was only thinking about the tactic that I had talked to Jesus on the phone, what I had to do right after," she confessed at a press conference in which she was already seen to be exhausted.

In just a few hours she had gone from being just a teenager, another student in Selectividad, a newly enrolled in Criminalistics, to being a new reference for Spanish sport. In fact, he confessed that just before the podium ceremony he had opened his mobile and discovered that he had "more messages than ever." "Not even on my birthday! I'll have to put filters on Twitter and Instagram," he joked, although he was right. This Saturday the day started with 200 followers and ended it with almost 10,000.

"Sorry, uh, I just can't stop thinking that I had a chance and I lost it," she apologized before going to sleep, still saddened.

Spain celebrated her first medal at the Tokyo Games and the discovery of a new star and she, on the other hand, regretted her luck for a movement, a single movement, that left her without the gold.

Tokyo 2020 How many medals does Spain aspire to at these Games?