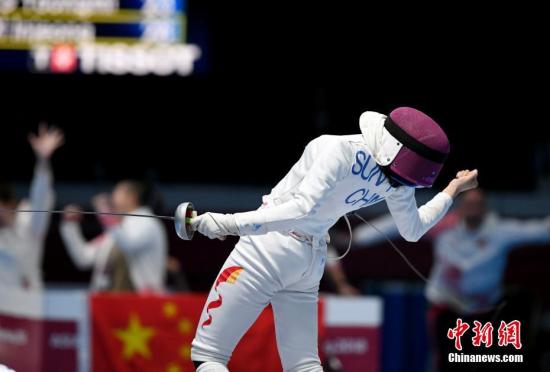 In the previous semi-finals, Sun Yiwen defeated Russian Olympian Murta Zayeva 12:8 to advance to the final.

The consecutive scoring at the final moments of the semifinals showed Sun Yiwen's good state.

In the final, despite taking the lead in scoring, Sun Yiwen did not panic and bit the score.

In the end, she achieved a go-ahead in the last game, but the opponent did not give up, chasing the score to 8 and then both sides were fined one point, and the two sides tied 10 to end the regular time.

In the decisive session, Sun Yiwen sealed his throat with a sword and won the championship.

In the Rio Olympics, the Chinese fencing team failed to win the gold medal and eventually won one silver and one bronze.

In this Olympics, on the first day of the match, Sun Yiwen lived up to expectations and won the gold medal, making a good start for the Chinese fencing team.

Speaking of the story of the Olympic champion and the fencing sport, there is something special-Sun Yiwen first came into contact with sports to strengthen his physique.

The picture shows the Chinese team's Sun Yiwen roared to celebrate after stabbing a winning sword.

Sun Yiwen was born in 1992. She came from Qingdao, Shandong Province. She caught a cold when she was a child in winter. So she started to practice running. A month later, she caught up with the fencing coach of the sports school and went to the school to pick athletes. In this way, she started to play in kendo. first step".

According to the Tokyo Olympics website, recalling how he felt when he first arrived at the sports school, Sun Yiwen said that seeing equipment and equipment was very novel. Try it twice."

Her strong curiosity about this sport drives her to keep improving.

"I want to learn about this sport that I have never heard of, and then explore, understand, and slowly fall in love with it," she said.

In an official interview with the Tokyo Olympic Organizing Committee, Sun Yiwen once talked about his most impressive memory of the Olympics.

She said that it was the 2008 Beijing Olympics. At that time, she had only been exposed to fencing for two years. Whether it was the wonderful "fights" of top players on the field or the Olympics, it was still very far away for her.

The picture shows the Chinese team Sun Yiwen in the game.

In 2016, she finally boarded the Olympic stage.

Sun Yiwen recalled that as a small player in the team, she had a very relaxed mentality at the time, just thinking "Don't drop in the first round, and try to play two more rounds."

As a result, in the first individual match, the two main players, Sun Yujie and Xu Anqi, were accidentally eliminated in the first round. Sun Yiwen, who alone carried the female major flag, narrowly defeated French player Lauren Lumby 15:14 in the bronze medal competition.

A few days later, she and her teammates won the second place in the epee team.

After the Rio Olympics, the new foreign teacher of the Chinese fencing team took office, and the senior teammates left the field for the time being. Sun Yiwen needed a new run-in with the new team.

Data map: The scene of the award ceremony of the Military Games.

In 2019, the women's epee team led by her won the team gold medal at the Budapest World Fencing Championships, helping the Chinese team win this honor again after four years.

Since then, she won the women's epee individual championship in the Wuhan Military Games.

And now, she is standing in the final arena of the Olympic Games, using the sword in her hand to win the third gold medal of the current Olympic Games for the Chinese sports delegation.

When talking about the Tokyo Olympics, Sun Yiwen once said: "In the past few years, it has been more calm. The goal of life is not just a gold medal. I think the process must be done well. In addition to the results, the process was not very good in this year. Do the process well, and the ending will naturally be okay."

Data map: In the semifinals of the women's epee team at the Rio Olympics, the Chinese team defeated Estonia 45 to 36 and advanced to the final.

A good process has also brought good results. This individual gold medal for women's epee means that the Chinese fencer has regained his place on the highest Olympic podium after 9 years. It is of great significance.

After the individual competition, Sun Yiwen will also lead the Chinese women's heavy team to hit the gold medal in the collective event.