Long hope for a medal: how the epee fencer Murtazaeva surprised everyone at the Tokyo Games

Russian epee fencer Aizanat Murtazaeva took fourth place in the individual tournament of the Tokyo Olympics. At her first Games, she defeated a number of favorites, including No. 1 seeded Choi In Jong of South Korea, but suffered two defeats in medal bouts. In the men's saber, Kamil Ibragimov was one blow away from reaching the semifinals and was also left without a reward. 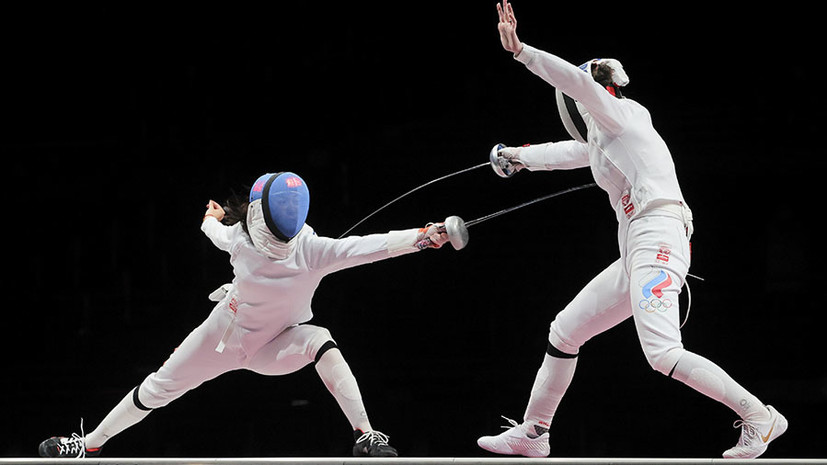 The medal feat of Murtazaeva

Of the 12 fencing disciplines, only one has never brought a medal to the Russian national team - this is a personal epee competition among women.

Domestic fencers ran in a team and won bronze at the last Olympics in Rio de Janeiro, but individually did not achieve such success.

Only Tatyana Logunova managed to reach at least the semifinals in 2000, after which she suffered two defeats.

There was little hope from the very beginning that this mediocre streak could be interrupted in Tokyo.

The leader of the team, Violetta Kolobova, recently returned to service after pregnancy, and was accompanied by Yulia Lichagina, who had not yet achieved noticeable success, who also had a long break in her career, and 19-year-old Aizanat Murtazaeva.

At the same time, two debutantes of the Olympics got an extremely difficult draw. Lichagin faced the 2018 world champion Mara Navarria from Italy, and Murtazayeva in the main draw had to face the first seeded Choi In Jong from South Korea. Kolobova was to start the tournament with a duel with the Polish woman Alexandra Yaretskaya.

The worst expectations were met, but not completely. Lychagina never found a way to go through Navarria, and Kolobova lost to her rival, better known for her team successes. But Murtazaeva, forced to start the tournament from the 1/32 finals due to a low rating, confidently defeated her Korean rival with a score of 15:11. Further, the native of Dagestan met with the American Kelly Hurley. In the time allotted to them, the girls did not determine the strongest, and a priority fight was assigned. It was enough for the Russian woman to defend herself for a minute, but she herself pricked her rival and went on.

In the quarterfinals, Murtazaeva was again awaited by a rival who was noticeably superior to her in status. It was Hong Kong-born Vivian Kun, who finished third in the last World Cup. The opponents started the fight very carefully - in the first two minutes they did not commit a single action, for which they received red cards and penalty points. This forced Kuhn to start active actions for which Murtazaeva was ready. She turned half of them in her favor and, according to the results of two periods, led with a difference of one injection, after which she allowed her opponent to earn a point alone only once. The very same Russian woman constantly replenished her account, until she got to the mark of 15 points.

Murtazaeva entered the top four epee fencers, and in order to get on the podium, she had to win at least one victory. At first, she tried to do this in a meeting with the Chinese woman Sun Yiwei, who already knew the bitterness of defeat in the semifinals of the Olympics five years ago. The rivals did not rush things and tortured every attack. Murtazaeva managed to take the lead with a score of 0: 2, but then missed five injections in a row, which had never happened to her at these competitions. The Russian fencer recouped and then released her opponent forward again. With 19 seconds left, she was only one point behind, but did not manage to save the fight. Murtazaeva went to fight for the bronze with the Estonian Katrina Lekhis, who also lost in the semifinals.

Even before the start of the fight, it was noticeable how much the opponent was superior to the Russian woman in height and arm length.

At first, this did not have any effect on their duel, but when Murtazaeva began to attack, each time she only rested on her sword.

Sometimes Lehis just stood waiting for the next point to be earned with one movement of the wrist.

Murtazayeva did not manage to win the first Russian medal in the women's epee, but at least she allowed for a long time to hope that this unsuccessful series would be interrupted.

One hit to the semifinals

In parallel with the women's epee tournament, men's saber fencers were held.

It was with this discipline that the main medal expectations were associated on the first fencing day.

However, none of the Russian athletes managed to reach at least the semifinals.

Kamil Ibragimov needed only one blow for this.

Like epee fencers, saber fencers began to suffer losses from the very beginning of the competition.

For the Russian, the match was quite successful, and with a score of 12:12 he even took the lead thanks to the opponent's red card, but the African representative was able to score three points in a row and go further.

The next was Konstantin Lokhanov, who met with the most experienced Korean Kim Jong Hwan.

At first, the bronze medalist of the Olympics in Rio did not stand out against the background of the Russian, but when it was necessary to end the fight, he took advantage of the mistakes of the Russian and quickly got himself a ticket to the 1/8 finals.

Ibragimov resisted the longest, having had two personal bronze medals at the world championships in the last Olympic cycle. His first two fights were like a blueprint. In meetings with the Germans Benedict Wagner and Matthias Szabo, the Russian led with a score of 12: 7, after which he lost all his advantage, but ultimately came out the winner. So he made it to the quarterfinals and got a chance to take revenge on Kim Jong Hwan.

Ibragimov again had a shock in the first half of the meeting and led twice with a difference of three hits.

But the 37-year-old Korean managed to knock off the mood by constant requests for a break, then complaining of pain in his leg, or problems with technology.

Each time it helped him to recoup.

Ibragimov and after that once again managed to create a reserve for himself and took the lead with a score of 14:12 - to win, there was only one point to earn.

But Kim Jong Hwan made three successful attacks himself and made it to the semi-finals for the second Olympics in a row.

The Russians will now try to win medals in the team tournament.

At the only stage of the World Cup this season, Ibragimov, Reshetnikov and Lokhanov won, having managed to pass the national teams of Italy, Hungary and Germany.

Next time they will return to the Olympic fencing track on July 28th.

A day earlier, the second chance for a medal will try to use the epee fencers.