A victim on the verge of insanity: why Dalaloyan's act should inspire the Russian national artistic gymnastics team

The Russian national artistic gymnastics team took third place in the qualification of the team tournament at the Olympic Games in Tokyo, not much behind Japan and China. The first day of the competition at the Ariake Gymnastics Center was remembered for the strong-willed act of Arthur Dalaloyan, who actually sacrificed individual finals in certain events for the chance to win gold with partners and a ghostly chance in the all-around. 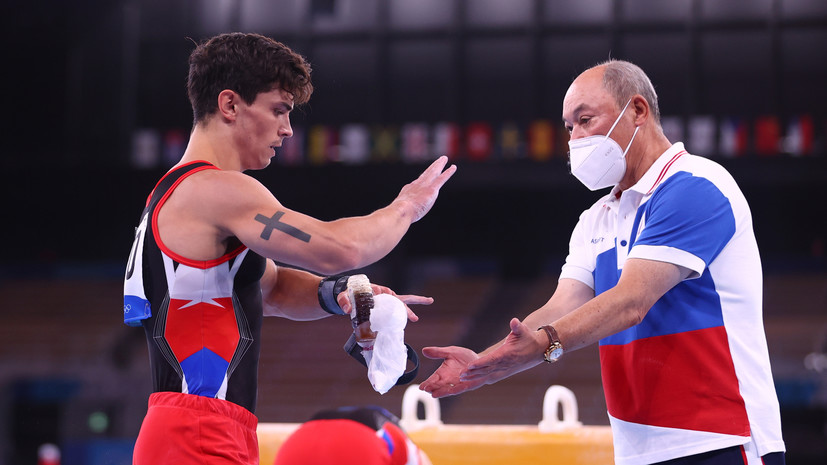 Artistic gymnastics is the essence of the Olympic Games, their essence. The point is not at all that this sport has existed in the program since 1896. Rather, here, like in no other sport, everything is pressed together: the cost of a mistake, which can be calculated in a thousandth of a point, but make the difference between a triumph and a disaster, the unique complexity of the programs, the outrageous risk, and the absolutely conscious willingness of athletes without hesitation to bet on con your life.

On the first day of the Olympics in Rio, where five years ago the men played out qualifying positions in the same way, European champion Samir Ait Said received a completely terrible injury in the vault, breaking his left leg on the ground. German Andreas Toba was eliminated in the same qualification due to a rupture of the anterior cruciate ligament. It is clear that an injury taken separately may be an absolute accident, but in 2012 the same Said (and also on the vault) received a triple fracture of his right shin at the pre-Olympic European Championships. And now he performs in Tokyo, dreaming of gold, the path to which the gymnast turns out to be so bloody.

You can remember one more Games - very old, in Montreal. The Japanese won the team victory then, having won 0.4 against the great USSR national team at the cost of incredible self-sacrifice: Sun Fujimoto performed in two final types of the program, on horseback and rings, with a fractured kneecap, which he injured during the team tournament. And, despite this, he flatly refused to withdraw.

By sporting standards, this is not heroism, but rather the norm.

In Russian gymnastic history, quite dramatic pages also happened: at the 2007 World Championships in Stuttgart, where our guys obtained Olympic licenses for Beijing, two athletes at once - Nikolai Kryukov and Anton Golotsutskov performed with severe leg injuries received during the tournament, when to replace it was already impossible.

And if one of them failed to bring this hellish path to the end, the country would have remained in men's artistic gymnastics without the Olympics.

Therefore, perhaps, one should not be surprised in Tokyo that Dalaloyan fought for the opportunity to perform in the all-around on Saturday on all six shells.

A few days before the start of the competition, Russian coaches reported that the absolute world champion-2018 would not be able to perform either in the vault or in floor exercise due to a recent Achilles injury (Arthur tore it up in April) - they say, the load is too great in these types on your feet.

If the athlete agreed with this option, everyone would understand him.

But Dalaloyan did not agree.

He was nevertheless covered - on the carpet, where, according to the athlete himself, everything came together: the joy that the inner strength was found to go to the jump and floor exercises, a colossal frustration - because in the second of these types, mistakes could not be avoided and meet your own expectations. Surely there was also unbearable pain, and the fear that any careless movement could lead to new injury, as well as the thought that the leg could simply not withstand the extreme load. I suppose all the fans were thinking about the same, watching through the screen how Arthur was crying right at the platform, covered with a sports jacket, but ...

When this happens at the Games, the person is not discouraged. They just silently stand next to me. That is how in 2012, at the Games in London, her coach Alexander Alexandrov stood next to Aliya Mustafina: a little over a year before that, the gymnast completely tore the ligaments of her left knee and underwent surgery, after which athletes rarely return to their previous level. On the eve of those Games, even the head coach of the Russian team expressed fears that the fear of re-injuring the leg would remain with Aliya for the rest of her sports life and would certainly interfere with her performance. But Mustafina returned from London with four medals. Including the gold conquered on the uneven bars.

Was it worth Dalaloyan to bet on the all-around, where he qualified with the sixth result? Now you can only pray that Arthur will have enough strength to withstand the team and personal marathon, but the athlete certainly sacrificed to some extent separate shells to some extent: in none of them did Dalaloyan get into the personal final, although he was close to this on the rings.

According to the results of the Saturday men's qualification, the Russian guys were selected to the team tournament third, showing virtually equal results with Japan and China. At the same time, Nagorny noted that he could not consider the team performance good: almost everyone had blots. Alexander Kartsev made the biggest mistake on the crossbar (he fell off the shell while performing one of the flights), but even Nikita estimated his own performance at 60 percent of the possible. And he added: "I hope Russia will become the winner of the team all-around."

Qualification is an insidious competition. The desire to give all the best for the sake of getting to the finals on separate shells often leads to a completely opposite effect. So it happened with Kartsev, who honestly admitted that he made a mistake because of an excessive desire to perfectly execute the combination, but the sporting grief of the Russian debutant could not be compared with the grief of the three-time Olympic champion Kohei Uchimura.

The 32-year-old gymnast received the right to perform at his fourth Olympics in Tokyo on only one apparatus - the crossbar. The implication was that this performance would become the legendary Japanese's swan song and, possibly, bring him an eighth Olympic medal (in addition to three Olympic victories, Uchimura has four silver awards). But Kohei fell off the crossbar, and the great Olympic career was completed on the first day of the Japanese home Games.