A slip is worth its weight in gold: how Galashina brought the Russian team the first medal of the Tokyo Olympics

Anastasia Galashina brought the Russian team the first medal of the Summer Olympic Games. She became a silver medalist in air rifle shooting. The 24-year-old athlete led the final for a long time, but faltered during the last shot and dropped to second, losing to Chinese Yang Qian. The bronze medalist was the Swiss Nina Kristen. 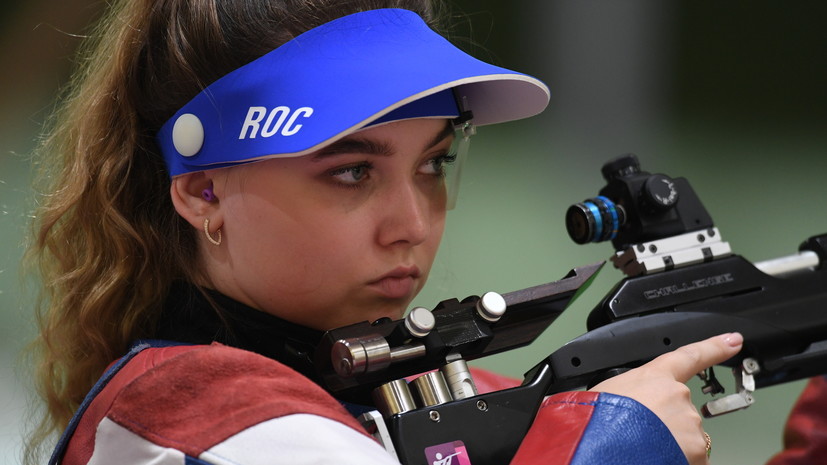 The first set of awards at the Summer Olympics has traditionally been played by girls who know how to handle an air rifle.

Shooting from this weapon at 10 meters twice recently allowed the Russian national team to open an account for their medals - in 2004 and 2008, Lyubov Galkina won silver the morning after the opening ceremony.

In Tokyo, Yulia Karimova and Anastasia Galashina presented an example to their compatriots.

But before proceeding to the drawing of medals, they had to overcome qualifications.

For the first time at the Olympic Games, girls did not conduct four sessions of ten shots for this, but six, as men do.

To reach the final, it was necessary to enter the top eight in terms of points scored.

She passed the first three sessions with an average score of 105 points.

But then she had two shots at once outside the ten.

The rivals did not forgive this, and Karimova immediately fell outside the top eight.

Galashina is more adapted to an air rifle - a year ago she won silver at the European Championship with this weapon, and in 2018 she became the bronze medalist of the world championship paired with Vladimir Maslennikov. For the 24-year-old athlete, the qualifications were very nervous. With two shots at 9.9, she alienated herself from the leaders in the first half of qualifying, but then began to catch up with them. During the last session, Galashina was still ninth and had to score at least 10.5 points per shot. As a result, she coped with this task - with a total result of 628.5 she reached the final from eighth place.

The qualification with a new Olympic record of 632.9 points was won by the Norwegian Jeanette Hegg Dustad.

She scored at least ten points with each shot and lost only 1.1 points to the world record.

But in the final, this result did not matter either for her or for any other girl, since the struggle for medals began anew.

For Galashina, this format of the decisive stage was optimal.

Leaving behind all the worries about qualification, in the final she immediately seized the lead on the basis of the first five shots and only let Chinese Yang Qian pass ahead after five more.

Next, it was necessary to maintain their level in a series of single shots for elimination.

Also on russian.rt.com Hope for a golden start: Russians will compete for medals in judo, shooting, fencing and taekwondo on the first day of the Olympic Games in Tokyo

In the second round, Galashina had the first failure. A 9.6 point shot briefly knocked her out of the top three and forced her to share fourth place with Swiss Nina Kristen. But the Russian woman quickly forgot about this failure. Her next four shots were nearly perfect, and she even managed to dislodge Yang Qian from the top spot. Together with them, Kristen and Dustad remained in the fight for three medals, and the native of Yaroslavl was ahead of all of them.

Galashina began the fifth round with a remarkable hit in the very center of the target, which brought the maximum 10.9 points. After the next shot, Dustad dropped out of the fight, and the Russian woman secured herself a hit on the podium. At the same time, she brought her advantage over Yang Qian to 0.5 points - Galashina's chances of gold at that moment were extremely high. The next round secured Kristen in third place and brought the Swiss a bronze medal. Galashina let the Chinese woman close to her, but still continued to win 0.1 points from her.

The first shot in the golden duel remained with the Russian woman - it was rated one tenth better.

At this moment, both girls could not withstand the nervous tension created not only by themselves, but also by the spectators who made their way into the arena.

Galashina made a terrible mistake and earned only 8.9 points.

The Chinese athlete became the first Olympic champion in Tokyo, and Galashina continued Galkina's tradition of starting the Games with silver.

Although the 24-year-old athlete could have some disappointment because of the lost gold, it was still difficult to expect her to even reach the final before the competition, and she was able to reach a medal at her debut competition.

Galashina herself admitted that she was happy with her second place.

“I am, of course, very happy about this.

This is my first Olympic Games and immediately I won a medal.

It was a difficult cycle, I did it.

I tried not to think about medals during the competition, did my job.

This resulted in the fact that I took the award, I am very happy.

You need to calm down and not think about anything.

I always say that I have no emotions, I am a robot, ”the Russian woman told Match TV.

“The subconscious was that I was doing everything right.

I didn't even know that there was a Chinese woman, I was in my thoughts.

I work only on myself, ”she concluded.