Simone Biles is looking for a partner, Djokovic and Pogacar extend their challenges to the Games and the pool awaits Dressel

Tokyo begins with a girlfriend, but as in good love stories, we never know how it will end, because the Olympic scene triggers the passion of the sport itself. That explains ... 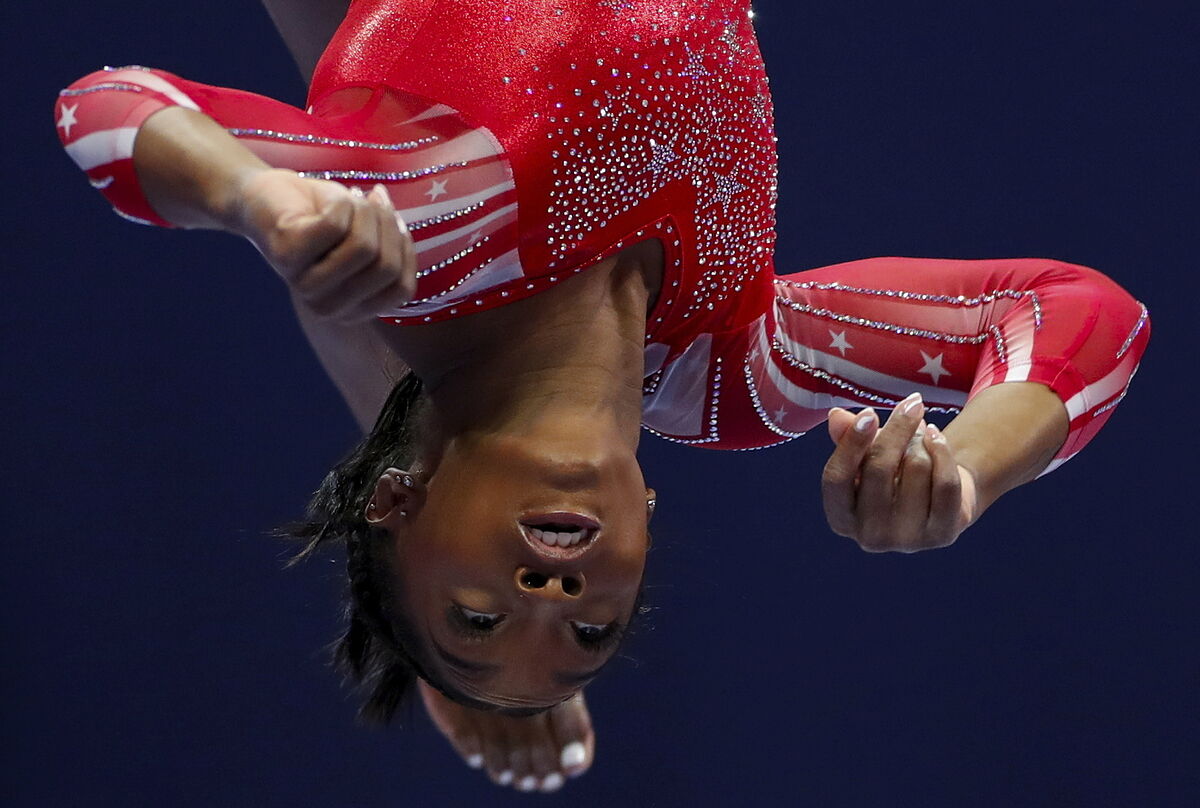 Tokyo begins with a girlfriend, but as in good love stories, we never know how it will end, because the Olympic scene triggers the passion of the sport itself.

That explains why there have been many athletes who, despite collecting records and titles, have felt incomplete without hanging the gold under the hoops.

, while who should hold the gymnast's hand is unknown after the withdrawal of two giants from the history of sport and Olympism:

There are candidates to emerge in Tokyo, like swimmer

, but not to replace them.

The Games find their kings, mainly, in the pool, the athletics track or on the rack and the rings, but the last two scenarios do not present a candidate with the capacity to devour several tests, as it may be the case of Dressel.

The speed on the tartan has shown good level in the season, but it is pending of a new king.

THE GYMNAST OF NEW TIMES

Biles exemplifies the history of gymnastics well. The American began at the age of girls, an era inaugurated by the Romanian

, the first 10 in history at the age of 14, but she is able to offer the best of herself as a woman, in the same way that

, the Czech who began her idyll with the Games precisely here, in Tokyo, in 1964. She was 22 years old and extended her reign until she was 26, in Mexico. Biles, who began his dominance in the World Cups at 16, the minimum age imposed by the International Gymnastics Federation to avoid situations of excessive demand on minors, competes in Tokyo with 24, after his five medals in Rio, four gold .

Unbeatable on the ground and dominating the general contest, Biles also represents the evolution of the female specialty towards more powerful biotypes. Comaneci was slender, graceful, with an elasticity typical of ballet, although not all the products created by the Mephistophelic coach

, in 1984, when the technician moved to offer his services to the United States, before the fall of communism and the

, in 1996. Lou Retton was like the 'atomic ant'. Biles, with his low center of gravity, improves his conditions, especially on the ground, and has managed to compensate for his short stature in events such as jumping. Although in Rio the gold bar was resisted, in Tokyo he will seek the plenary session, but, in addition, he will try to make the world fall in love with his exercises, waiting to know if he will offer his 'Yurchenko' with a double deadly pike. No other woman has managed to do it.

Biles also adds the racial factor, being the first black gymnast to reach the world throne of this sport dominated in the past by the Eastern blocs. It is a conquest comparable to those carried out by

in Formula 1, preserves inaccessible in the past to blacks. In the year of the 'Black Lives Matter', his reign in Tokyo may have a greater significance. Withdrawn from her biological mother,

, by social services due to alcoholism and raised by her grandparents, the truth is that for this gymnast Olympism is the great reciprocated love of her life, to which she hopes to be faithful in Tokyo.

The void left by Bolt is for a number of reasons. First, because of his unattainable records and his ability to extend them throughout the speed tests, even if he didn't get to test the 400, for which he was clearly gifted. Second, because of his charisma, irreverent to the Olympic liturgy, almost ecclesiastical. He was recordman, star and 'showman', everything that sport and its industry need. The numbers speak exaggeratedly. Bolt left a futuristic 9.59 in the 100. The best 'sprinter' arrives in Tokyo with 9.77. Of

is an exceptional brand, which makes it the ninth man in history, but far from the recent past of wine and roses on the track. No one has run that fast in the last few years since the Bolt era except

(9.76), absent from the Games for not showing up for anti-doping controls.

Whether or not Bromell becomes the fastest man in the Games, a qualitative distinction, it is difficult that it is enough to crown him as the great male reference in Tokyo.

will have more prominence in the same test, but female,

who at 34 years old and after being a mother, has achieved the best mark in 100 since

The sprinter can thus compensate for the crisis suffered by Jamaica, known as "the land of lightning", in the male category.

DUPLANTIS AND THE WHITE HOPES

The track awaits other men with greater expectation, such as the pertiguista

, turned at 21 years in the true heir of

. Born in the United States but of Swedish nationality, like his mother, he has broken all the roofs and opened a new era in the pole, on the way to another barrier: 6.20. Two centimeters missing.

White athletes, however, are not limiting their competition aspirations this time, as the surprising appearances of Nordic athletics demonstrate.

, the best of the

, is one of the most anticipated at the big date.

At 19, the Norwegian arrives predisposed to devour part of the middle ground, dominated by Africans.

We will see your answer.

He is accompanied by his compatriot

, surprising world record holder of 400 meters hurdles (46.70), after overcoming a time dating back to Barcelona 92 ​​in a test that has belonged to African Americans for years.

THE APPEARANCE OF 'MR.

One of them appears as having come from a very distant time or from an unknown future. He is

, capable of alternating high and long jump at the highest level. Transitions or alternations between triple jump and longitude occur in athletics, or between longitude and sprint events. But to find someone who combined length and height in an Olympic event you have to go back to

, in 1912. His compatriot will do it in Tokyo, 109 years later, after winning it in the American 'trials'. Harrison also comes with the second best world record of the year in each event. At 21 years old, this son of a hurdles specialist, who also practiced in his training, has jumped 8.47 in length and 2.37 in height, respectively, two records with which in some Games he can aspire to the podium and , even to be at the top according to the level of the final.

The track could see

before the closing, as the winner of the marathon.

Although if he succeeds, the Kenyan, who has already won in Rio, will not be able to do so under the popular clamor, like

under the Arch of Constantine in Rome in 1960. A pity.

The cry of Tokyo, however, is against the Games, not against the heroes or those who accompany them.

This country is defined by one word: respect.

LEDECKY, TO EXTEND ITS DOMAIN

While Bolt has no successor capable of a global work on speed, the pool generally offers more alternatives. In Tokyo they fall to Dressel and

, who can continue her dominance in Rio, although without comparing herself to Biles. Dressel comes with a world record of 100 butterflies, a more than worthy business card after the Phelps era, as well as three others in the short pool. But his mastery of swimming is proven by his harvest in the two World Cups after Rio, with seven golds in Budapest (2017) and six of eight metals in Gwuangju (2018). The competitive environment is the same, but the Games have something different, let's not forget that.

Beyond the track, the pool or the gymnastics hall, stars abound, including some of those who before the

did not have access to the Games, those known as "professionals."

is the only representative of the 'Big Three', without

. The Serbian aspires to a repóker in 2021, which would be to add the Olympic gold to the four Grand Slams of the year.

the most tyrannical appearance of the sport in the last cycle.

Everything can be expected of the Slovenian, tyrannical winner of his second Tour, but he will have to concentrate all his talent in a single event.

Also attractive is the attempt by the best all-rounder in cycling,

, who after his successes in classics, big-round stages or mountain events, is one of the contenders for gold in 'mountain bike'.

The Spain of the

, its last white hope, in the first phase of a basketball tournament that once again finds the team to beat in the US team. In front,

. Doncic, a former Real Madrid star and Mavericks star, has been enough to lead Slovenia to the Games, a far from easy achievement given the severe selection imposed by the pre-Olympic criteria on European teams. Slovenia is not among the favorites, but let's not forget how much Balkan basketball has shone in the history of the Games, even if it was like Yugoslavia (one gold, four silver and one bronze). You can expect anything from a talent like Doncic. Above all, if, like this year, you are 'in love'.