Duplantis: "The qualifier will be tougher than the final"

Armand Duplantis is adapting to the conditions in Japan. At 09.40 on July 31, the qualifier in pole vault begins and as he is a big gold favorite, he has everything to lose. There is a special tension before the qualifiers. - The qualifier is more nerve-wracking than the final, says Duplantis. 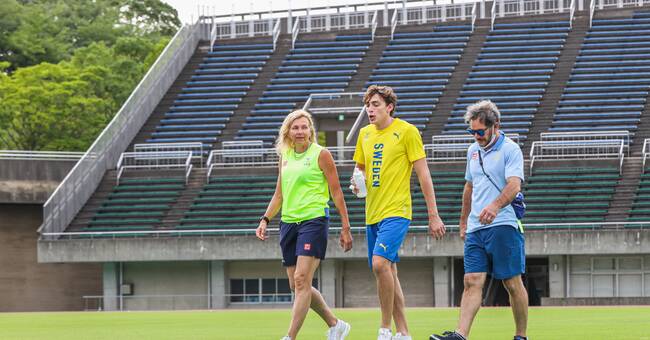 Duplantis participated in a digital press conference from the camp in Fukuoka where all the major Swedish media were present.

Curious, he looked at the people in small pictures on the screen and wondered if they were newspaper people.

All questions were asked completely openly so no medium received any exclusive quotes.

Duplantis received most of the questions in Swedish and then answered in English.

- I adapt to the times and the heat and am where I want to be.

I have never been in better shape, says Duplantis and enjoys having the good feeling he really had since last winter when there were two world records, 6.17 and 6.18, which still applies until the Olympic final on August 3. .

Then he hopes for a new number combination as a world record.

The 21-year-old is doing his first Olympics, so young but still a veteran in the industry of wandering pole vaulters who form a large family during the competitions where you support each other while being competitors.

He tries not to make such a big deal out of it being an Olympics even if it does not quite work out.

- It is as usual but still different.

If I win and jump super high, I do not know what will happen because I have never experienced anything like this before, Duplantis thinks.

No qualifying heights have been announced yet (which applies to all athletics).

Duplantis of course has a close eye on what he thinks will be required to go to the final.

I will not try to save my legs by jumping as few jumps as possible.

We jump in the morning and have two full rest days after that and since the final is in the evening, it is almost like three full rest days, he says and thinks he already knows the entrance height in the qualifiers.

It's nice to get used to the tracks so it does not matter if I take some extra jumps.

"Feels like I have the whole of Sweden on my shoulders"

Do you have a clear idea of ​​what types of poles you should have at the different heights or does it develop during the competition?

- There are always different conditions.

I have a good feeling for what I can get out of each pole but it depends on how I run and how the stand is set up.

What many do not understand is that there are large variations around how the stand is set up and how the box feels.

How do you feel about being such a big favorite?

- It is as it is and this is what it looks like before each competition.

It's a bit comical that I'm coming to my first Olympics and everyone expects me to win.

It feels like I have the whole of Sweden's pressure on my shoulders.

I try to stick to my routines and do what I usually do and hopefully make it a little better.

I have done it for so long now and handled pressure, which makes me feel safe, says Duplantis who feels great support to have his parents and coaches Greg and Helena in place in Japan.

- If I do what I have done in recent years, I should go out there and win, he says and thinks that the favorite is reasonable.

- It would have been unfair to have high thoughts about me if it had been unreasonable.

He's been getting the same kind of questions for 1.5 years now because the games were postponed after the fantastic winter of 2020 with two world records within a week.

- Sam is the one who can challenge the hardest but it is an Olympics and anything can happen and someone else like Chris Nelson (5.92 this year) can certainly assert himself.

Someone will probably jump six meters and challenge me.

To reach the final, you must pass the qualifiers inside a deserted Olympic stadium in Tokyo.

- The qualifier is more nerve-wracking, super hard, than the final.

You have everything to lose and little to really gain.

"Had not done it a normal day in Uppsala"

How do you enjoy jumping so early in the morning?

- That is what gives the feeling of anguish, they always seem to take place early in the morning.

It makes it tougher.

If it was a normal Wednesday and I was in Uppsala, I would not choose to jump at "half past nine" (said in Swedish) but when it is something as important as this, I have no problem getting up early at 06.00 and preparing me, there will be a lot of adrenaline and tension.

Although I prefer to compete in the evening, it is the same conditions for everyone, says Duplantis.

We jump in time to one day after the final.

What do you see in front of you when you look back?

- That I have won the final, says Duplantis.