Chinanews client, Beijing, July 21 (Reporter Wang Yu) postponed for a year, the Tokyo Olympic Games, which had been in a difficult situation, will finally be unveiled on July 23, local time. After five years of waiting, as the highest palace in the sports field, and at a special moment in history, this Olympics is bound to make the world resonate at the same frequency.   Chinanews.com has launc 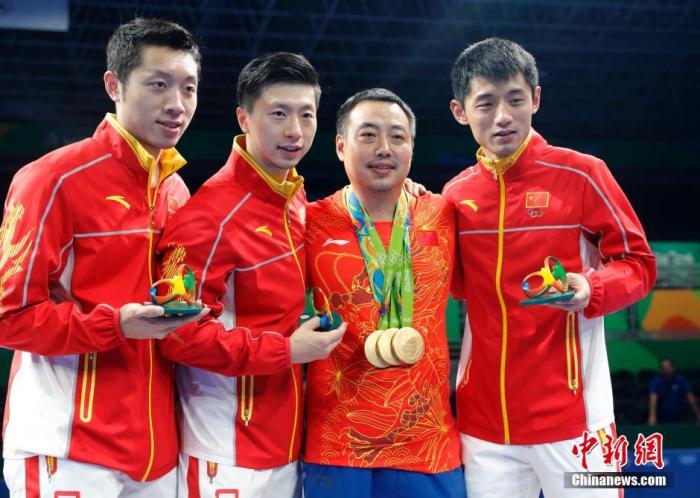 Chinanews client, Beijing, July 21 (Reporter Wang Yu) postponed for a year, the Tokyo Olympic Games, which had been in a difficult situation, will finally be unveiled on July 23, local time.

After five years of waiting, as the highest palace in the sports field, and at a special moment in history, this Olympics is bound to make the world resonate at the same frequency.

Chinanews.com has launched a series of forward-looking columns "Tokyo Point", which aims to help the audience have a general understanding of the advantages and potential breakthrough points of the current Chinese sports delegation.

In this column, let us focus on the well-known "national game"-table tennis.

At the Tokyo Olympics, the Chinese table tennis team sent six players including Ma Long and Liu Shiwen to play, and proposed the goal of 3, 4, 5.

Guoping's "conservative" is not without reason.

During the Tokyo Olympic cycle, the Chinese table tennis team faces challenges that they have not encountered in recent cycles.

On the one hand, the postponement of the Olympic Games is unprecedented, and the team can only adapt to the new rhythm of preparations to maintain the players' competitive state; on the other hand, opponents such as Japan and Germany are eyeing their eyes and have formed a threat that cannot be ignored.

Under multiple pressures, the Chinese table tennis team has gradually promoted the replacement of new and old lineups through training and competition inspections.

Under the leadership of veterans Ma Long, Xu Xin and Liu Shiwen, the new forces such as Fan Zhendong, Wang Chuqin, Sun Yingsha and Wang Manyu began to take on the heavy responsibility, greatly expanding the national table tennis formation in Tokyo, and laying the foundation for the Paris Olympics three years later. .

In the 2020 ITTF finals, men's singles champion Malone won the cup at the award ceremony.

Among them, after years of tempering, the six-member main lineup also represents the current national table tennis's strongest combat power.

As the glorious teacher of Chinese sports, the inheritance and heritage of the Chinese table tennis team has become the secret of the team leading the international table tennis world all year round.

During the Tokyo Olympics cycle, veterans represented by Ma Long, Xu Xin and Liu Shiwen overcame the impact of injuries and age, and used personal experience to complete the important task of "passing and helping the team", injecting the dual power of competition and spirit into the development of the team.

As the only "Grand Slam" player among the active male table tennis players, veteran Malone's tenacity should be recorded in history.

But even with serious injuries, he is still more and more courageous, attacking the defending men's singles champion.

This time in Tokyo, Malone has to shoulder the important task of leading the team. This is a proof of the team's trust in him and his strength.

The "double insurance" in the men's singles with Ma Long is the new generation of force Fan Zhendong.

As a key training target for men's singles during the Tokyo Olympics, he has not only experienced 15 months of consecutive men's singles No. 1 spotlight, but also has struggled for more than 300 days to miss the tournament championship.

Compared with the men's singles national table tennis "old age to bring the new" combination, the female players Chen Meng and Sun Yingsha are the first time in their careers to set foot on the Olympic arena.

Since table tennis entered the Olympics, the Chinese table tennis team has never let the women's singles champion fall behind. Chen Meng and Sun Yingsha, who have always been stable in foreign wars, are expected to meet in the finals.

Xu Xin and Liu Shiwen missed the singles arena, which surprised many people.

Although this means that the dream of the two Olympic singles champions has come to an end, they will also shoulder the heavy responsibility of winning the first gold in mixed doubles history for the national table tennis team.

Not only that, the mixed doubles is also the first gold medal for table tennis in the Tokyo Olympics.

Since their partners in mixed doubles, Xu Xin and Liu Shiwen have swept through the major stadiums and won the World Table Tennis Championships and the year-end finals. However, they have also suffered an upset loss to the Hong Kong group Huang Zhenting/Du Kaixuan.

As the vanguard of the Chinese table tennis team, Xin Wen, who is fighting alone, wants to achieve new historical achievements, and needs a more calm mind and more stable performance.

Liu Shiwen once admitted that he was a little uncomfortable with this new regulation at the beginning, and Malone also received a yellow card for violations in the mock game.

For many athletes, wiping the table and blowing the ball are already a subconscious habit, and it is difficult to adapt to this adjustment.

At the same time, the Tokyo Olympics table tennis team competition system has also ushered in new changes: the first set is a doubles match, and the remaining 4 sets are singles duels. The team that takes the lead to win 3 sets wins.

Once the first doubles accidentally loses, it will most likely determine the trend of a game.

Coupled with the rule of 5 games and 3 wins per game, it adds suspense to the game.

According to the Olympic ranking recently announced by the ITTF, Fan Zhendong and Malone ranked the top two seeds in men's singles, while Chen Meng and Sun Yingsha were the women's singles and second seeds.

In this way, the national table tennis singles players will avoid encounters before the finals, and if they "fall out", they will also put heavier pressure on their teammates.

In particular, Japanese players Mima Ito and Tomokazu Chang, who have beaten Guoping several times, have repeatedly shown their desire for Olympic champions. They will be the biggest opponents of Guoping on the road to the championship.

In addition, the German men's table tennis duo Ocharov and Boll are also unwilling to act as green leaves.

Looking forward to the upcoming Tokyo Olympics, Liu Guoliang said at the end of the training camp: "We are ready and have been preparing for 5 years. Everyone is full of confidence, mental state and other aspects have reached the goal, and we will gradually enter the rhythm of the competition. Adjust your mentality and position, pack light, and enjoy the Olympics." After five years of sharpening the sword, I look forward to the success of Chinese table tennis in Tokyo.