"The innocent cannot be punished": how Russia reacted to the acquittal of the swimmers Andrusenko and Kudashev

The Court of Arbitration for Sport dropped the charges against the Russians Veronica Andrusenko and Alexander Kudashev, whom the International Swimming Federation accused of violating anti-doping rules. Both will be able to compete at the Tokyo Olympics. According to the athlete, she has two feelings: “I don’t even understand what they are congratulating me on, I didn’t do anything, I didn’t win the competition.” Kudashev admitted that he was confident in the positive outcome of the case. ROC President Stanislav Pozdnyakov and Minister of Sports Oleg Matytsin thanked the All-Russian Federation of Swimming and Lawyers for the work done. A member of the presidium of the WFTU Denis Pankratov called on those who criticized the swimmers to apologize without understanding the situation. 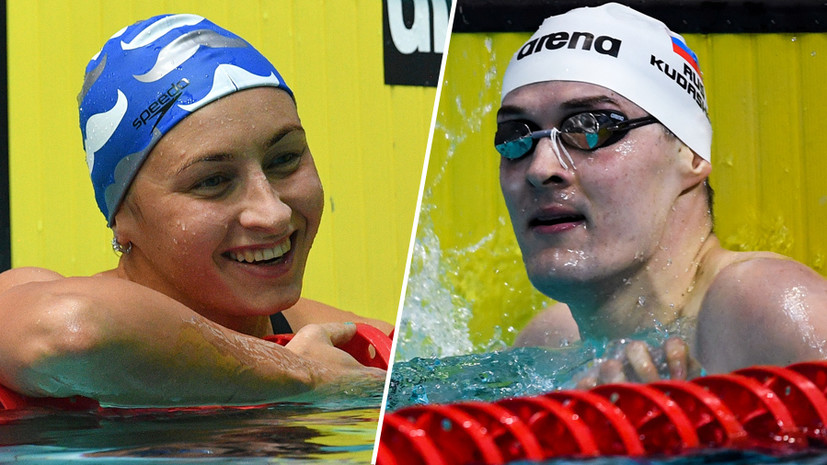 The case of Veronica Andrusenko and Alexander Kudashev, temporarily suspended from the competition by the International Swimming Federation (FINA) for violating doping rules, ended well for Russian swimmers.

The Court of Arbitration for Sport in Lausanne (CAS) granted their appeal, thus allowing them to participate in the Tokyo Olympics.

In Russia, this news was received with enthusiasm, but, of course, the athletes themselves were more pleased than others.

According to Andrusenko, the news of the disqualification shocked her, as she was confident in her innocence.

Relatives, friends and even strangers who wrote words of support helped her to cope with a difficult situation.

On the one hand, I don’t even understand what they congratulate me on, because I didn’t do anything, I didn’t win the competition.

(Head coach of the national team. -

) Sergei Gennadievich Chepik said: "Congratulations, not because the trial was won, but because your honor is justified."

The innocent cannot be punished.

In our world, of course, anything happens, but that's exactly how it is here, "RIA Novosti quotes Andrusenko.

In turn, Kudashev admitted to TASS that he was confident in the positive outcome of the proceedings, although he was afraid that the appeal would be delayed, and this would not allow them to go to Tokyo.

“When you are a pure athlete, you have nothing to be afraid of, but your nerves were still naughty.

I fell asleep today with difficulty, but the lawyer called and made me happy.

He worked separately from the team, tried to abstract, understood that everything should end positively.

The thought was in my head that the court could be postponed, that the proceedings would continue.

What was “before” is forgotten, I want to speak and show myself in full force, ”said Kudashev.

The suspension of the athletes became known just a week before the start of the Olympics.

FINA said that the World Anti-Doping Agency (WADA) found inconsistencies in their data in the LIMS system.

Given the fact that the analysis of the base of the Moscow Anti-Doping Laboratory was completed in April 2020, the incident caused a wave of indignation.

The All-Russian Swimming Federation (ARF) expressed their intention to prove the case of Andrusenko and Kudashev to CAS, for which a group of Russian and foreign lawyers was hired.

CAS dropped all charges, and FINA was forced to fully admit this verdict by allowing the swimmers to compete.

In addition, the organization will compensate both athletes in the amount of CHF 1,500 to cover legal costs.

Stanislav Pozdnyakov, President of the Russian Olympic Committee, said that the acquittal was preceded by a lot of work done jointly with the WFTU.

“I am very happy for Veronica and Alexander, as well as for the fact that the swimming team will perform in Tokyo with its full complement, including in relay races.

Once again we were convinced that clear, coordinated actions can ensure proper protection of the rights of athletes even in the shortest possible time, "Pozdnyakov said.

In turn, the Minister of Sports of the Russian Federation Oleg Matytsin called the CAS decision objective, and also praised the WFTU and lawyers for their prompt response and professionalism.

“In such situations, it is important to systematically interact with international federations and competent, active legal support.

The main thing is that the participation of our athletes at the Tokyo Olympics is ensured.

I wish them health, good luck and victories, ”the press service of the Ministry of Sports quotes Matytsin.

WFTU President Vladimir Salnikov also expressed satisfaction with the fact that swimmers will be able to perform at the Games.

In his opinion, the most important result of the case is the removal of charges from the athletes.

“They were found not guilty.

Accordingly, there are no restrictions either.

We are happy that the situation has been resolved, now the athletes can safely continue their preparations for the Olympic Games, where they will fly with the team, "Salnikov said.

And a member of the presidium of the federation, Denis Pankratov, spoke about another unpleasant side of such situations.

According to him, suspicions of violation of anti-doping rules provoke a flurry of criticism against athletes, although their guilt is not always proven.

“People don't try to figure it out, they start blaming, pouring out the slops.

It's good that everything was resolved so quickly.

We are waiting for an apology from those who have already managed to speak evil.

And so everything is fine.

It is a pity that the guys worked hard, ”Pankratov complained.

Until the last moment, the coaching staff of the Russian national team was sure of the innocence of the athletes, so they did not make any changes to the application for the Games.

Chepik spoke about the atmosphere that prevailed in the team before the verdict was passed.

“When the news came, it was nervous, but when they learned that they had entered the fight for justice, of course, they were worried, but waited calmly.

The guys really hoped that everything would end well.

We expected justice to prevail, the accusations were unfounded.

Veronica and Alexander will fly with the team to Tokyo.

We waited for a decision literally every hour, we did not cancel anything after their departure, ”said the head coach.

The well-known sports lawyer Artyom Patsev explained that FINA will not be able to initiate the continuation of the case against Andrusenko and Kudashev, since the CAS decision is final.

“FINA asked to apply disqualification, the suspension was issued earlier, and now there was a consideration on the merits.

All charges against our swimmers were dropped, and at the same time a temporary suspension.

So, again, there will be no proceedings after the Olympic Games.

The case is over, "Patsev explained to the Championship.

The State Duma also reacted to the incident.

Former world boxing champion, deputy Nikolai Valuev suggested that despite the positive outcome of the swimmers' case, provocations against the Russians during the Olympics are unlikely to end there, so you need to be ready for them.

“The admission of our suspended swimmers to the Tokyo Olympics and the removal of doping charges against them is an absolute success of the WFTU.

Great fellows who were able to defend the rights of our athletes in such a short period of time.

Let's hope that this planned unsportsmanlike situation will not unsettle our athletes, but, on the contrary, will give additional motivation.

I wish them success and good luck at the Olympics ”, - quotes the words of Valuev Sport24.

Andrusenko is a two-time European short course champion and a multiple winner of major tournaments, including the world championship.

The winner of the 2019 Universiade Kudashev has been announced for the 200 m butterfly distance.