Al-Ahly and Kaiser .. “tenth” on the African clock, and this is its date, UAE time

"Looking for the Tenth", under this slogan, the Egyptian Al-Ahly club headed to the economic capital of Morocco, Casablanca, to face the South African Kaizer Chiefs, tomorrow, Saturday (23:00 Emirates time) at the "Mohammed V" stadium in the final of the African Champions League football competition. in the room 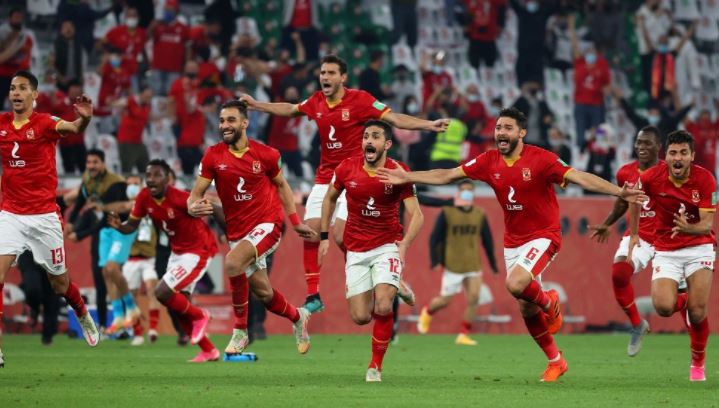 Al-Ahly and Kaiser .. “tenth” on the African clock, and this is its date, UAE time

"Looking for the Tenth", under this slogan, the Egyptian Al-Ahly club headed to the economic capital of Morocco, Casablanca, to face the South African Kaizer Chiefs, tomorrow, Saturday (23:00 Emirates time) at the "Mohammed V" stadium in the final of the African Champions League football competition.

On the other hand, the yellow club is looking forward to ending the Arab dominance of the title in the last four seasons and crowning the first continental title in its history.

Optimism dominates the largest proportion of the Cairo club's fans, to retain the continental title that it has won nine previous times (a record), and this is caused by the great experience of the "Red Devils" players in the continental competition and given the technical differences on paper with the South African club. Meanwhile, the South African team is waiting for the opportunity after eliminating the powerful Wydad Casablanca from the semi-finals.

Al-Ahly's director of football, Sayed Abdel Hafeez, told the club's official website, "Al-Ahly is ready for the final and is training hard, and there is a state of optimism among all members of the mission. We respect the Kaizer Chiefs team, and we reject any attempts to reduce it, just because it has not previously won the African Champions League." .

He added, "Kaizer Chiefs reached the final at the expense of big teams, most recently Wydad of Morocco in the semi-finals, which confirms that the South African champion is strong and offers a collective ball."

The Egyptian club is armed with the experience of its South African coach, Pitso Mosimane, after he won the continental title twice, the first in 2016 with Mamelodi Sundowns and then with Al-Ahly last season, as he is fully aware of the potential of his people.

On the eve of the upcoming confrontation, Mosimane warned Kaizer Chiefs in press statements, saying, "Al-Ahly plays with my usual philosophy, and we will do what is required and know how to score goals."

He expressed his confidence in his team's ability to score, explaining that Kaiser is also striving to achieve its goals, foremost of which is winning the continental title for the first time.

"The Champions League is very complex and any team needs a lot of experience to advance," he added.

The list of the Egyptian club is devoid of influential absences, as it is limited to some substitutes such as Ahmed Ramadan "Beckham" and Nasser Maher.

Musimani is counting on the giant goalkeeper Mohamed El-Shennawy and Moroccan defender Badr Banoun, who will return to play on his land after he defended the colors of Al-Raja Club in previous seasons, the "Joker" Ayman Ashraf, and the Tunisian Ali Maaloul, who many see as the center of gravity in the red squad. And in the middle are Hamdi Fathi, Amr Al-Sulayya and Mohamed Magdy “Afsha”, who scored the crowning goal against Zamalek last season.

On his way to the final, Al-Ahly overcame several difficulties in the group stage, especially after losing to Simba of Tanzania, but the team gradually regained its balance, despite being second in its group, and having to play tough confrontations in the playoffs, from which it came out victorious over Mamelodi Sundowns and Tunisia's Esperance.

The numbers tend to favor Al-Ahly in its confrontations with South African clubs, where it won 12 matches, drew 8 and lost 6.

With its defensive formation and conservative performance in the matches, the team managed to reach the first final in its history in the most important competition at the continental level.

During his career, the team relied first on coach Gavin Hunt, then Englishman Stuart Baxter, and reached the group stage after playing all the preliminary rounds, then was able to qualify for the quarter-finals by the difference of confrontations with Horia Conakry of Guinea in the group stage after he was late in the last confrontation to the deadly minutes, but that Zimbabwean striker Khama Billiat equalized 2-2 to turn the score and place the group standings.

In the quarter-finals, he overtook Simba and then overthrew Wydad in the semi-finals.

The team includes a relatively good squad that depends on physical strength, defensive block and quick rebounds. Baxter is counting on goalkeeper Bruce Pfoma, who starred against Wydad or Nigeria's Daniel Akpeyi, and stands out in the defense, Eric Matuho, Daniel Cardozo and Reef Frosler, and in the middle with Gabaulu Bloom and Zimbabwe's Willard Katsandi.

The most important element is the top scorer, the Serbian sniper Samir Norkovic (29 years old), who has tremendous physical strength and the team's top scorer with three goals in 9 matches, in addition to Billyat, who is considered a trump card.

The Serbian confirmed that the Al-Ahly match "means a lot to me and my career," and added, "I am working hard to win the Champions League."

And he added, "It is a 90-minute match that means a lot to us and to our fans as well, and if we win it we will be part of the history of this club."

As for his colleague Matuho, he considered the match a war, and said, "We are looking forward to winning the title in order to reach the Club World Cup, and this means that this match will be a war."

He added, "The match against Al-Ahly will not be easy. We are preparing well to play with all our strength. We will not be easy prey for them. They will be surprised by the team they will face. They will not know this Kaizer Chiefs team, it will be a war. We are ready for every challenge we face as players."

The team holds one continental title when it won the Cup Winners' Cup in 2001.