No replay of the Swedish success in GCT: "Jättesurt"

Last year, it was double Swedish at the top at home in GCT through Peder Fredricson and Malin Baryard Johnsson. But during Saturday's Grand Prix, it was a pole out for the Swedish riders. - It is very sour, says Baryard-Johnsson to SVT Sport. 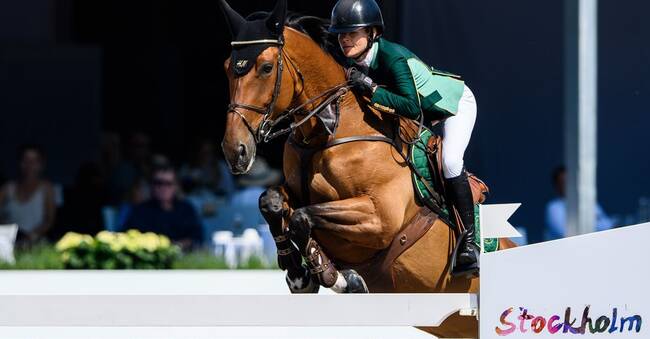 Saturday's qualifier for the Grand Prix class was really successful for the Swedish riders as six out of seven advanced from the qualifier.

In the Grand Prix, Angelica Augustsson started Zanotelli, who is back at the highest level after having her third child, with a round that for a long time seemed to be flawless.

But the boom on the last obstacle rolled down.

- It's great, she's been tested a lot in recent months on national jumps.

Going in and jumping it is not easy, but it did not feel like it was very difficult for her.

It's great that she belongs at this level.

- It was my dream, I wanted my three children and then take me back to the top.

"I do not know what happened"

Henrik von Eckermann was demolished and it cost him a place to jump.

- I do not know what happened.

Disaster riding to that obstacle.

But they are animals and not machines, that's it, says Henrik von Eckermann to SVT Sport.

Malin Baryard Johnsson looked to get a chance for revenge from last year, when she was beaten by Peder Fredricson and finished second.

But the boom on the penultimate obstacle fell and thus the strong crew missed the jump.

- It is clear that it is very sour, she does not have a chance to jump that obstacle either.

We get in the curve and the surface drops a little.

She did everything to be flawless today, says Malin Baryard Johnsson, who finished ninth with Indiana.

Finally, the Swedish jump went to Peder Fredricson and last year's winning horse All In.

But even here the penultimate obstacle fell and then also the last obstacle.

Thus, it was clear that it was a jump-off without Swedish participation.

Of the four who made up, the British Scott Brash was the strongest and he took home the victory before Edwina Tops Alexander.

- It feels wonderful. There is no Grand Prix that this horse can not win, says Scott Brash and takes the opportunity to pay tribute to the Swedish audience who were present.