Uefa responds after the stars are marked 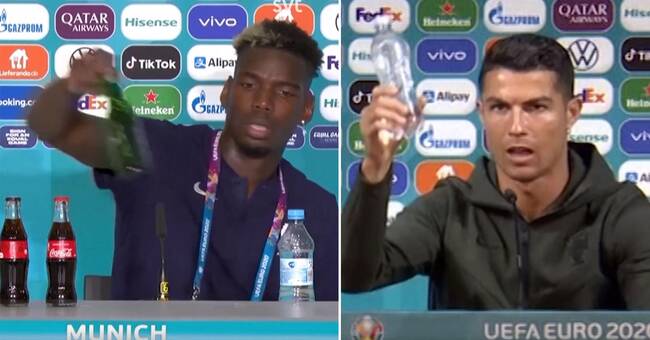 - Uefa has reminded participating nations that the sponsors are an essential part of this championship, says tournament manager Martin Kellen.

Both Italy's Manuel Locatelli and France's Paul Pogba have since followed in Cristiano Ronaldo's footsteps.

Locatelli moved two Coca Cola bottles out of the picture during the press conference after the 3-0 victory against Switzerland, and Pogba, who is a devout Muslim, removed a bottle of the Heineken beer brand after France's win against Germany (1-0).

UEFA tournament manager Martin Kellen believes that the association is primarily critical of Ronaldo's actions, and that there is a greater understanding of players who act on the basis of their religious beliefs.

- If it is for religious reasons, then they do not need to have bottles there, he says.

Uefa has not taken any disciplinary action after the players' actions.

Kellen says that they will not fine specific players, but in that case it is the national federations that are affected.

If it continues, a fine may be imposed.

- We have rules that all participating nations have signed.

We have reminded them of their bonds, but of course fines are always a possibility, says Kellen.