Tampa Bay in the lead over the Islanders

The third semifinal meeting of the Stanely Cup between Tampa Bay and the New York Islanders ended in a 2-1 win for the Florida team on away ice. This is the fourth away win in a row for the team. - It shows that we are an experienced group. Wherever we go, we are met by enthusiastic (opposing) fans, and we grow with the task, says Tampa's Steven Stamkos. 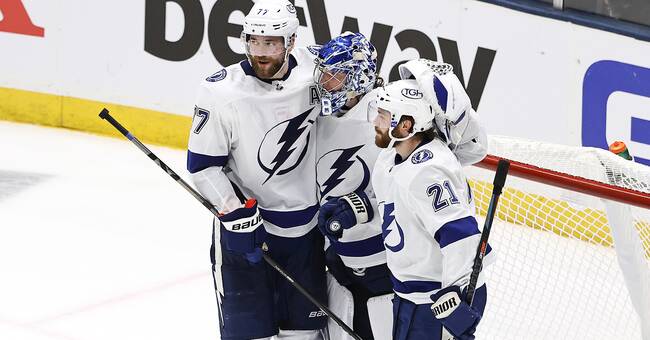 The Islanders equalized at the end of the second, but after just a few minutes, Tampa was there again and took the lead through Brayden Point, played by Victor Hedman.

- We are very happy for this win.

You know how difficult it will be this late in the playoffs, says Brayden Point who scored for the sixth game in a row.

Tried to take the lead

In a final attempt to get an equalizer, the Islanders picked their goalkeeper off the ice with less than two minutes left to play.

A grip that unfortunately did not give any result and the position 2-1 to the guests stood when the final signal sounded.

- We have a good team and it helps when you get an early lead.

It was something we wanted to achieve and we succeed because we have been there before, says Tampa Bay coach Jon Cooper who praises the team's efforts:

- It's when you really need these guys that they show what they stand for.

They really work according to the mantra: "take the lead, keep the lead, extend the lead", he continues.

And the fact that the team has a Stanley Cup playoffs fresh in mind seems to give the Tampa Bay players good self-confidence.

- We lean towards the experience, we have been here before.

This group knows how to sharpen up when it comes to.

The further you get (in the playoffs), the harder it will be, says Steven Stamkos.

The next meeting between the teams will also be away for Tampa Bay - more specifically the night before Sunday, even then at the Nassau Coliseum on Long Island in New York.