The "Palace Pier", owned by His Highness Sheikh Hamdan bin Mohammed bin Rashid Al Maktoum, under the supervision of trainers, John and Thaddy Gosden, was crowned the champion of the "Queen Ann Stakes" race for the "Group 1" horses for a distance of 1,600 meters, which took place yesterday, at the opening The 310th edition of the Royal British Festival Royal Ascot 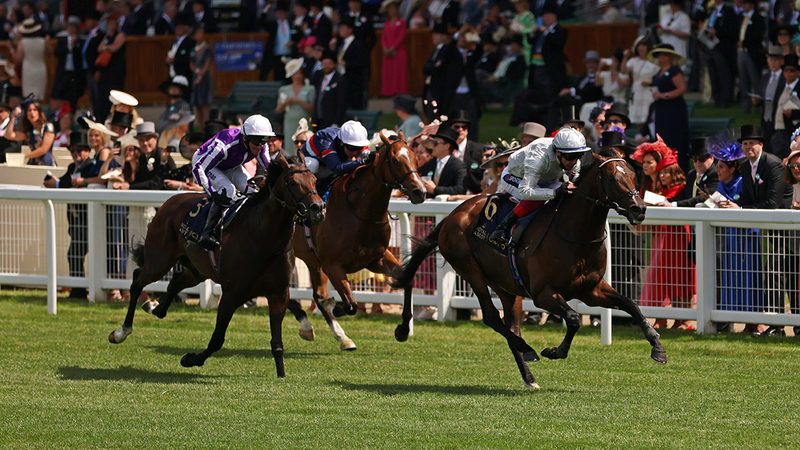 The "Palace Pier", owned by His Highness Sheikh Hamdan bin Mohammed bin Rashid Al Maktoum, under the supervision of trainers, John and Thaddy Gosden, was crowned the champion of the "Queen Ann Stakes" race for the "Group 1" horses for a distance of 1,600 meters, which took place yesterday, at the opening The 310th edition of the Royal Ascot Festival.

With this, "Palace Pierre" achieved his fourth victory in the first category races, and the second in "Royal Ascot" after winning the "St James Palace Stakes", last year.

And the jockey, Frankie Dettori, knew how to lead “Palace Pierre” to compensate for his late start from the last gate, and gradually approach the constellation of lead, before unleashing the four-year-old pony, in the last 400 metres, capturing the lead, and cutting the finish line in first place , with a time of one minute 39 seconds and 18 milliseconds, 1.5 lengths behind the "Loop Way Fernandez" owned by "Dirk Smith, John Magnier and Michael Tabor", under the supervision of expert coach, Aiden O'Brien, and led by jockey Simon Hevornan, while the third place went to the horse "Sir Busker, owned by "Kent Valley Thurbert", under the supervision of coach William Knight, and led by jockey Ocean Murphy.

The Emirati horses continued their brilliance on the opening day, after the pony "Juan Elcano", owned by Sheikh Mohammed bin Obaid Al Maktoum, and the supervision of the jockey Roger Farian, and the leadership of the jockey Andrea Atzini, managed to win the Wolverton Stakes title, which took place in the sixth half, For a distance of 2000 metres.

On the other hand, Lord North, owned by His Highness Sheikh Zayed bin Mohammed bin Rashid Al Maktoum, and under the supervision of John and Thaddy Gosden, is defending today his title, which he achieved last year, in the Prince of Wales Stakes, dedicated to purebred hybrid horses. Group 1 is the highest-ranked in the world, and is the fourth and main game on the second day of Royal Ascot.

The second day attracts 16 elite Emirati horses, competing for the titles of seven rounds, the "Prince of Wales" run, offset by three runs for the "Group 2" horses, one run for the "Listed" category, and two runs for the "Evalence" horses.

The second day of the festival will start at 5:30 pm UAE time, with the start of the Queen Mary Stakes run for two-year-old fillies in the “Group 2” race category for a distance of 1000 meters, before the excitement continues its way to the fourth round and the main, through which “Lord North" to repeat his achievement last year, when he grabbed the first place with a comfortable difference from his closest competitor, the horse "Adeeb", owned by His Highness Sheikh Ahmed bin Rashid Al Maktoum.

Lord North is making his first appearance this season in European races, and his chances of adding his seventh victory in global races are based on his impulsive abilities that led him in his last participation to snatch a brilliant victory in the "Dubai Turf" run for "Group 1" horses, in the Dubai Cup. Global, last March.

The ambitions of "Lord North" collide with six elite horses, a distance of 2000 meters grass, most notably the highest-ranked "Loof".

On the other hand, the two mares "Kimari" and "Low F the Sea" bear Godolphin's hopes of regaining the title of the "Queen's Faz" race, which has been absent from the coffers of the blue logo since the victory of "Hartnell" in the 2014 edition, when the two marries compete in the second-half challenge. For "Group 2" horses, a distance of 2,847 meters.