When Luis Enrique decided that he had to find another way to knock down Sweden's goal, Álvaro Morata's head had already been (many) minutes circling the ... 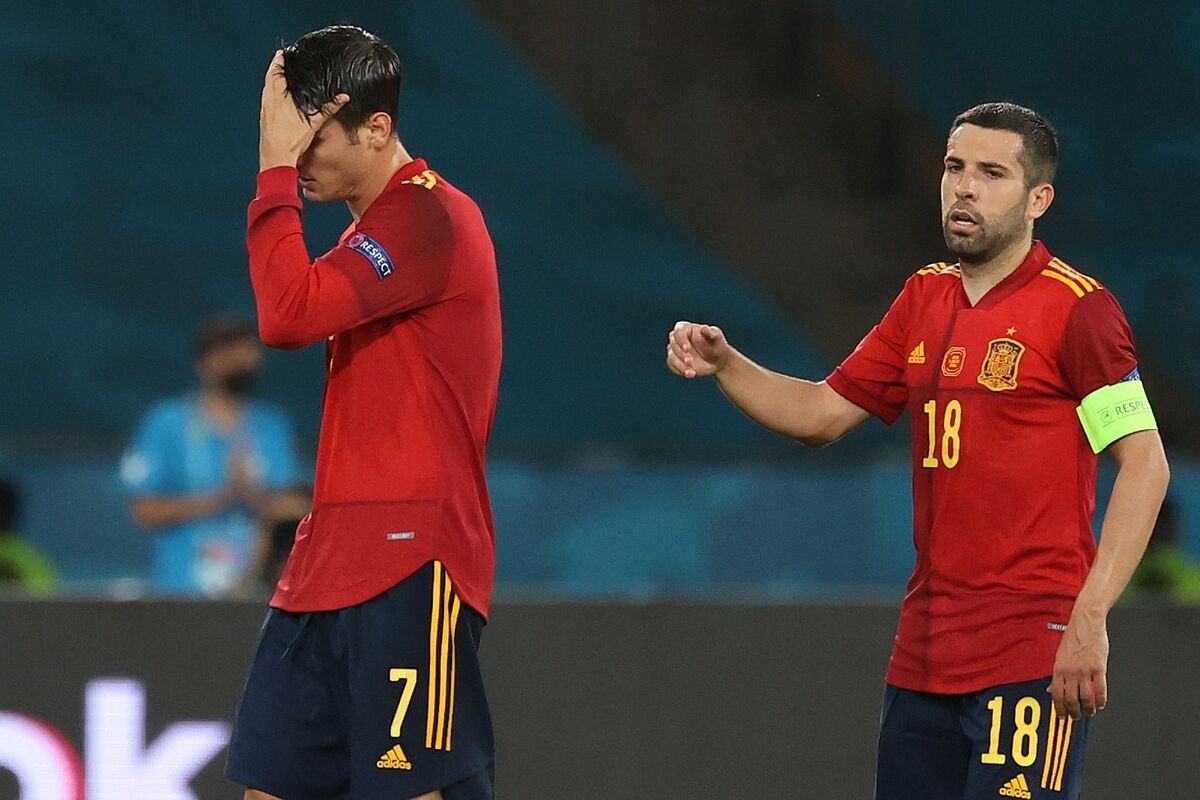 When Luis Enrique decided that it was necessary to find another way to knock down Sweden's goal, Álvaro Morata's head had already (many) minutes turning the matter. The

two best chances of the match

had passed through his boots

. In none of them did he even manage to find the goal. The audience murmured in the first part, when he stood alone before Olsen after a gift from Danielson. The stands whistled in the second act, when his claw was innocently a foot from the Swedish goal. He lowered his head, while his friend Koke asked for affection, the captain, Jordi Alba, consoled him and Luis Enrique tried to give him a little push with an impetuous applause from the band. But it had been a few minutes since Álvaro had been mentally there.

So, when the illuminated sign marked his number 7, after game time, he picked up his pace and got lost in the band.

The noise accompanied their departure.

The shouts of support tried to camouflage

the whistles towards the Juventus striker

, whose last image had been that of the ball on the crossbar at the Metropolitano, during the friendly against Portugal, which led to an uncomfortable fight.

«It is not the first time and there is no doubt about a forward like Álvaro, who has shown a lot.

He was unsuccessful today, but the next day he still puts three and shuts everyone's mouths, "warned central Laporte, on the night of his debut in an official match with the Spanish team.

without seeing the door

. Since that goal against Greece (1-1), in the qualifying phase for the World Cup, fate has twisted his gesture. Since that game, back in March, he has been pursuing his number 20 goal, which in these games has been so close and at the same time so far. «I have seen two reactions from the public with Morata. There was a criticism, but also others chanted his name. I stay with that. I try to protect my players as much as possible and I am happier with the reaction of the fans when they sing their names, "explained Luis Enrique from the press room of the Andalusian stadium. "Álvaro played a very good game, except that he didn't make the chances. He is used to situations like this, but it is not pleasant, "the coach concluded, convinced that his streak will change.

They all closed ranks around the ram again. It already happened a few days ago after the duel against Portugal. “It is important to us, he knows a lot about this. He has not been lucky in the face of goal, but he will. Whistles don't seem right to me. Anyone who was inside would like to be supported and applauded, "said

, who knows him well from both his spells at Real Madrid and Atlético. Yesterday he made his debut at the Eurocup as a right back.

He works a lot for the team and that can be seen on the pitch ”,

Pedri, the youngest debutant with Spain

in a final phase

At 18 years, six months and 18 days, he surpassed the precocity record set by Miguel Tendillo in the 1980 Eurocup: 19 years, four months and 11 days.

"They should cheer us up"

From the songs of the Metropolitan to the murmur smeared with whistles from La Cartuja. Some chanted his name for encouragement, others whistled. It is what has the heat of the stands. The sensations forgotten by the pandemic are returning. «

I don't understand why they whistle him

. Morata is a great player, the fans would have to cheer us on more at this time because we play for ourselves and for them, at a time like this, "added Dani Olmo, who watched from the grass as his teammate left crestfallen, fought, as Spain, with the goal.

Precisely Olmo, a few minutes later, would be

, who entered the field acclaimed by the fans.

The whistles to the starting point leader were transformed into an ovation to that substitute, who carried the 9 on his back.

The same one that seemed to shine hope in front of a granite wall.

Nor did Gerard, the Spanish top scorer of the season with 30 goals, hit the spot, although he also had his chances.

There were 17 shots from Spain throughout the night.

But, simply, it was not the day and La Cartuja, despite his efforts, was left without shouting a goal.

On Saturday, against Poland (21.00), he will have a new opportunity.

EurocupThe 'danger' of the national team being vaccinated now: "Side effects can affect performance"