Janne Andersson: "Well, we have done something good"

Sweden put on the defensive against Spain and fixed a point. Despite his limited play, Janne Andersson was happy with the game so far, but still wanted to change the line up. - To go here and meet Spain in 32-degree heat and think that you can play them off, then you are completely naive, says the Swedish national team captain. 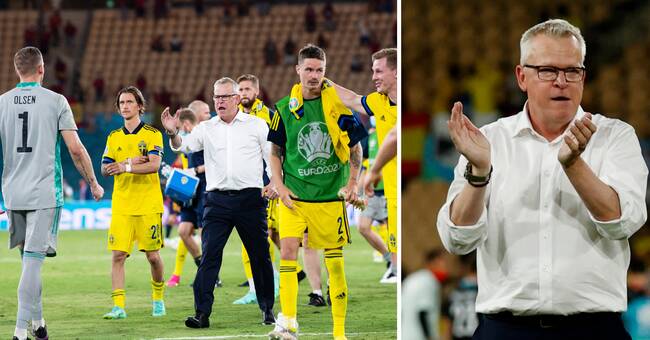 It was not a dazzling Swedish game in the European Championship premiere.

But when referee Slavko Vinčić blew off for full time, Janne Andersson's Sweden had fixed a cross against Spain.

- We implemented our plan in a good way.

In the second half we get up a bit and then it gets better, except at the end.

As a whole, we are not a bit ashamed of this point, says Andersson.

- Of course they have some goal chances, Robin makes some nice saves, but we also have good situations, he continues.

Sweden tried to start gaining time in fixed situations early in the second half.

Mikael Lustig was booked for kicking the ball away after the whistle.

This was met by shouts from the more than 17,000 spectators on site in Seville.

- If they live, it's good, then we have done something good, Andersson says.

The first match against Spain away was in advance the toughest for Sweden.

Now Slovakia is waiting for Friday, which took a somewhat surprising 2-1 victory against Poland earlier on Monday night.

- Taking a stick away against Spain is an enormously heavy point.

In the next match we have to play in a slightly different way, it is a different opposition, he says.