Brazil sends a strong message to the "Copa America" ​​teams 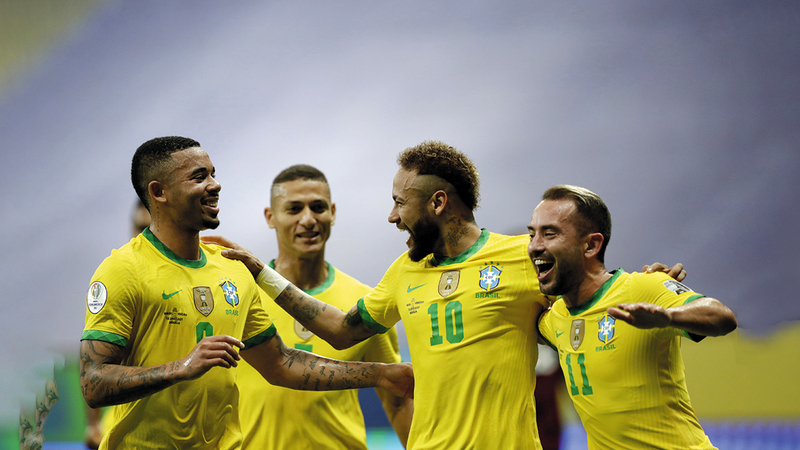 Venezuela was defeated by three in the opening

Brazil sends a strong message to the "Copa America" ​​teams

At the "Mane Garrincia" stadium in the Brazilian capital, Brasilia, the Brazilian team taught its Venezuelan counterpart a harsh lesson, and sent a strong message to the rest of its competitors in the tournament with a big victory in the opening match of the tournament.

The samba dancers won the match with three goals scored by defender Marquinhos, Neymar and Gabriel Barbosa in the 23rd and 64th minutes from a penalty kick and 89th.

The events of this edition of the prestigious tournament were scheduled to be held in the middle of last year, but it was postponed due to the outbreak of new infections with the “Corona” virus.

The events of this edition were also scheduled to be held in Argentina and Colombia, but the latter withdrew from organizing the tournament a few weeks ago, then Argentina followed suit.

With the two countries withdrawing from the organization, the South American Football Association decided to transfer the activities of this edition to Brazil, which led to widespread criticism.

The number of people infected with the “Corona” virus in Brazil, with a population of 210 million, exceeds 17.4 million, while the number of deaths due to infection with “Covid-19” caused by infection with this virus has reached more than 486,000 people.

Hours before this opening match, the Venezuelan national team called 15 new players to its ranks, after many infections with the new “Corona” virus were recorded among the players and members of the technical staff.

And it turned out that there were eight players among the confirmed cases of infection, to be isolated immediately.

According to a statement issued last Saturday by the Ministry of Health in Brasilia, players and members of the technical staff were infected, but without any symptoms, and they are currently self-isolating.

The ministry also stated that the South American Football Confederation (CONMEBOL) had been informed of the situation.

Last Friday, the Venezuelan Football Federation said that captain Thomas Rincon had not traveled to Brazil because he was suffering from flu symptoms.

Venezuela coach Jose Peseiro confirmed that the absences affected the team's preparations for the tournament.

"We will compete with 11 players who have never trained or played together," Peseiro said.

The Bolivia national team stated that it had four positive cases of the Corona virus, including three players and a member of the technical staff.

CONMEBOL decided to change the rules of the Copa America, and the maximum replacement for players in the final list for each of the tournament teams was canceled due to the pandemic.

Colombia started its Copa America football career with a 1-0 victory over Ecuador at dawn yesterday, and the goal came after a wonderful technical sentence in the implementation of a free kick near the penalty area.

Edwin Cardona scored the game's only goal three minutes before the break, as he started the technical sentence, and two other players touched the ball, before it reached him and shot from close range into the goal.

The goal was initially canceled due to offside, before the VAR intervened and decided to count it.

Ecuador was clearly the better party in the second half, but did not manage to equalize to bottom the second group along with Venezuela, who lost 3-0 to Brazil, the hosts, in the opening competition.

Ecuador won 6-1 against Colombia in the World Cup qualifiers last November, but it was clear from the start that there was no room for many goals with few dangerous chances on both sides.

No team could play at a fast pace during a violent match that stopped a lot, during which the referee awarded 33 fouls.