Luis Enrique: We'll keep an eye on him

They are considered by many to be the big favorite in the premiere match. But Spain's national team captain Luis Enrique is not as convinced. - It will be a difficult match. Sweden is a tough opponent, he says to SVT Sport. 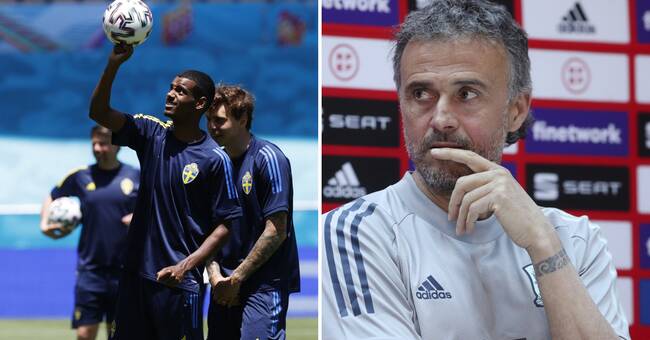 Blue-yellow starts the group game in the toughest possible way, when they face Spain - in Spain tonight.

But Luis Enrique is aware that it will not be an easy task, despite the favorite and the home ground advantage.

- We know each other well.

We have met several times in the last two years.

It's a team that usually plays quite a straight game.

They have strong, fast players.

You do not rely on individual players, says the national team captain to SVT Sport.

But one player Luis Enrique and his Spain should have extra control over is Alexander Isak.

- He is a very dangerous player that we are well acquainted with.

He is a very fast player who fits perfectly with Sweden's game idea.

We will keep an eye on him, says Enrique.

SVT's expert Ola Toivonen believes that the "La Real" striker can be an important piece of the puzzle for Janne Andersson and Sweden in tonight's European Championship premiere.

- Isak has had an incredibly nice season and he has this little extra that makes him score 17 goals in La Liga.

I think the Spanish players have respect for him and that can give room for other Swedish players, says Toivonen.

The match between Spain and Sweden is broadcast on SVT1 / SVT Play.