Djokovic lifts Tsitsipas two sets, wins the cup and is already a great one from Nadal and Federer

Novak Djokovic should not be considered dead, even less when he is immersed in the fight for eternity. The world number 1 lifted two sets against Stefanos Tsitsipas to ... 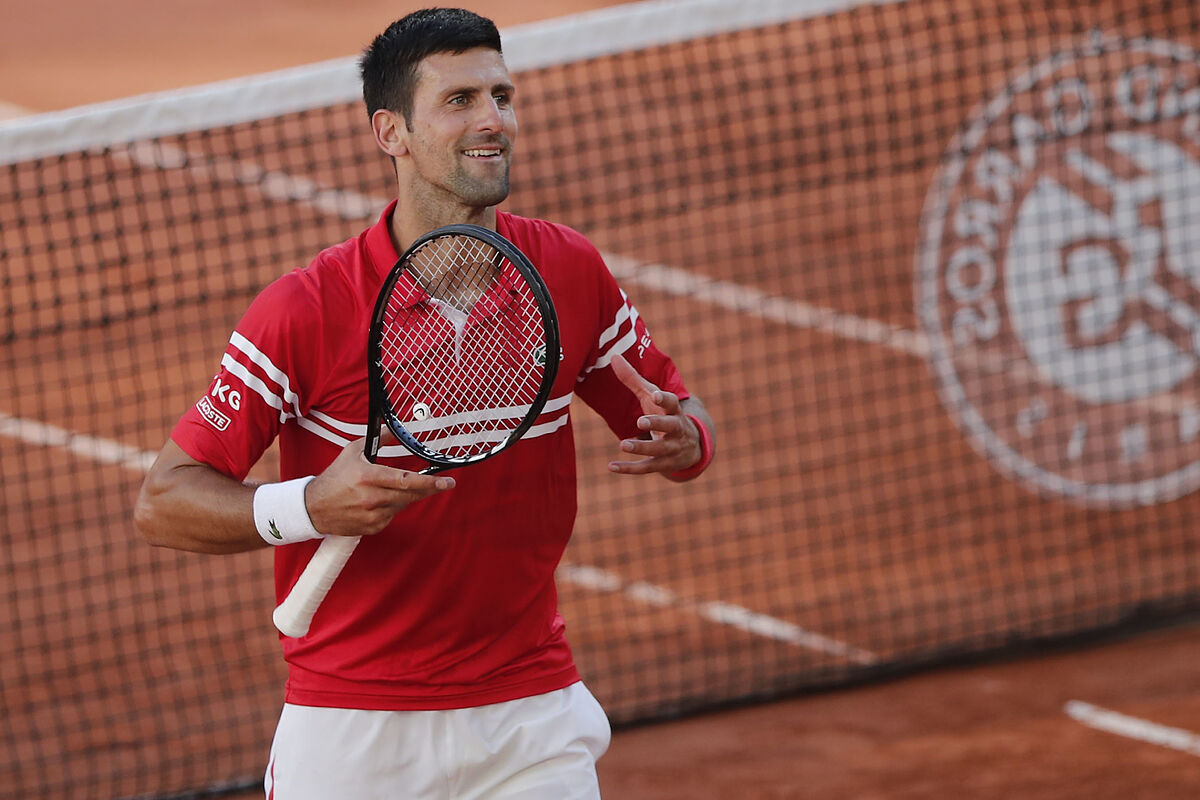 should not be considered dead

, even less when he is immersed in the fight for eternity. The world number 1 lifted two sets against

to win his second title at Roland Garros and nineteenth Grand Slam, with which he narrows the podium where they still stand, both with 20,

, who after breaking in the fourth game of the third set sniffed the blood and saw his opponent collapse, treated in the lumbar area at the conclusion of that set, overcome by the vertigo of the situation. Nine times champion in Australia, five at Wimbledon, three at the US Open and two in Paris, Djokovic is closer than ever to the men with whom he has dominated tennis for more than two decades.

More temperate than in other celebrations, he looked at the sky with open arms, squatted on the track and continued with gestures of euphoria towards his corner, where were, among others, his wife,

, and his lifelong coach,

, before receiving the trophy from

After beating Nadal in the semifinals, he needed one more step towards the cup. In 2015, once he had defeated the Spanish in the quarterfinals, he crashed against

in the end. Something similar was not far from happening this time, but almost 14 years after winning against Federer the first of the greats, he managed to take the number 19. No one in the open era had signed at least two titles in each of the four tournaments that any player dreams of. It has already been done by

, who adds his name to those of

, the two who signed it before professionalism.

Separated by 12 years and for a good piece of history, Djokovic and Tsitsipas took to the field in search of a victory with a very different meaning for both. In his first Grand Slam final, after three steps through the semifinals, the 22-year-old Greek was looking at the maximum certification of a talent progressively reflected in recent seasons.

had a much greater claim, once Nadal, the 13-time champion and top seed for the final victory, was liquidated in the semifinals. His kingdom is already from that world that he only shares with the Spanish and with Federer.

The start of the match did not disappoint.

in the first game, Tsitsipas developed with the creativity and freshness that he has been doing throughout the tournament.

It took four games to add his first point to the rest, but he played as equals, without being gripped by vertigo due to his neophyte status.

Little given to speculation, both generated games and handled alternatives, to the delight of a passionate audience, which made their respective devotions explicit.

It was Tsitsipas who could begin to unbalance the duel, with a set ball in the tenth game, denied by his opponent after an intense rally. Who knows if touched by frustration, he gave up the serve immediately, cornered in the backhand area, a blow that nonetheless hits with exquisite skill. Djokovic missed the opportunity to close the set with his serve and this time, unlike what happened to him in the third with Nadal, he ended up paying it in the tiebreaker, despite having an option to take it to the rest. After an hour and eight minutes, the applicant was in command.

The main problem for Djokovic, who also started the second set on the wrong foot, was his weakness against the Greek's right crusade, more poignant when they met diagonally. It was not enough for

to rush his returns, an art he masters better than anyone. The aggressiveness of Tsitsipas, oblivious to any distraction, placed him with a two-set advantage. Djokovic could not replicate his opponent's plan, clearly dominating with the

. Lucid and audacious, the player from Athens wisely played all the important points, until he lost service to the fifth threat midway through the third set.

Djokovic took oil out of the situation while his rival, who seemed to sense that his destiny was to win in three sets, began to show signs of fatigue. It was impossible to maintain that level of aggressiveness and accuracy, unwavering fidelity to his game plan. The Serbian balanced the score with astonishing simplicity and escaped early in the fifth set. All heart, Tsitsipas still managed to get one of his balls to bite the lines, but he was at the limit, the final had been too long for him. He was saved from two balls that would have left him 5-2 down, the rest. He forced Djokovic to serve to win the cup. He did it, on the second match ball, shaking for the sixth time in his career, second in this tournament, first in a Grand Slam final, two adverse sets.Tsitsipas, whom he also beat in last year's semi-finals,he covered his head with a towel, prostrate in his chair, disheartened at the great missed occasion.

Roland Garros 2021Rafael Nadal, after falling for the third time at Roland Garros: "You don't have to dramatize"