The top of Group G sings the team from complicated calculations

The national team continued its progress in the double qualifiers for the 2022 World Cup and the 2023 Asian Cup, after the team defeated Indonesia with five goals without a response, in the ninth round of Group G matches, to raise the "white" score to 15 points in second place, while 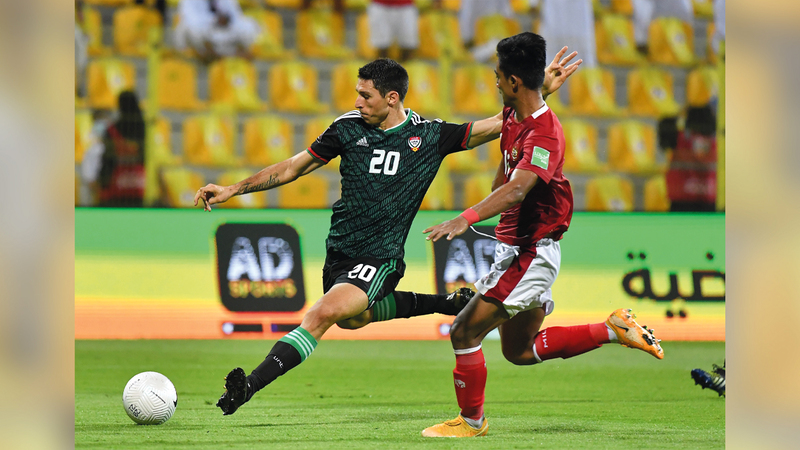 "White" is fifth in the "Best Seconds" struggle

The top of Group G sings the team from complicated calculations

The national team continued its progress in the double qualifiers for the 2022 World Cup and the 2023 Asian Cup, after the team defeated Indonesia with five goals without a response, in the ninth round of Group G matches, to raise the "White" score to 15 points in second place, while Hafez Vietnam is at the top of the standings, after raising its score to 17 points by beating Malaysia 2-1.

And the match of the national team against Vietnam in the 10th round, the day after tomorrow, Tuesday, is the one that will determine the identity of the team that will lead Group G and qualify directly for the third stage of the 2022 World Cup qualifiers.

In the event that the national team wins over Vietnam, Al-Abyad will officially guarantee the top of Group G, and qualify directly to the third stage of the qualifiers, while in the event of a tie or loss, the team will occupy the second place, and its chances remain suspended according to the results of the other teams competing for the five seats.

Oman tops the list of teams in second place, with 12 points, as it meets Bangladesh in the 10th round, but the result of the Omani match will not help, especially since Bangladesh is fifth in Group E.

The Chinese team is in second place with 10 points, and the “Dragon” plays in the fifth round with the leaders of the first group, the Syrian team, which has officially qualified for the third stage of the qualifiers, while the Lebanese team is in third place with 10 points, and the team will face a difficult confrontation against the leaders South Korea, in contrast, ranks fourth with Uzbekistan, with nine points, and plays a decisive match against Saudi Arabia to determine the leader and runner-up of Group D.

For his part, the head of the National Teams Committee of the Football Association, Youssef Hussein Al-Sahlawi, praised the performance of the Al-Abyad players against the Indonesia team, explaining in press statements: “We played a very good match in all respects, whether by possession of the ball or through the way we play and score goals, and in the end, We achieved the most important thing, which is to win and get the three points.”

He added: “The most important match for us now remains, which is to play against Vietnam in the last round of the second stage of the qualifiers, and it is a difficult and important match, and there is no doubt that we will enter the match with the aim of achieving victory to advance to the top of Group G, and qualify directly to the third stage of the World Cup qualifiers. ».

Al-Sahlawi pointed out that the team is proceeding according to the plan and aspirations that were determined before the start of the qualifiers, and said: “We talked from the beginning about that the team will play every match it plays as if it were a championship final, and Al-Abyad won three games, and the focus will be great against Vietnam, to avoid entering into Qualification accounts by occupying second place, and we fully trust the technical staff and players and their ability to win, and make the audience happy, who deserves salutations and praise for the great role they played in supporting the team and players, during the past matches.

Marvik: The team has not achieved anything so far

The Dutch national team coach, Bert van Marwijk, confirmed his confidence in his players' abilities to win against Vietnam the day after tomorrow, at the end of the Group G qualifiers for the 2022 World Cup and the 2023 Asian Cup, pointing out that (White) has not achieved anything so far in the qualifiers. World Cup, stressing the importance of winning over Vietnam.

"I am happy with the great result, but I am not satisfied with some periods of the match, especially the slackness at the end of the first half," Marvik said in a press conference after the 5-0 victory over Indonesia.

He added: I spoke with the players after the first half about the need to build confidence, return in the second half to present the strong performance known about them, and strive to finish the match completely.

He continued: We have not achieved the desired goal of the qualifiers yet, and I was looking forward to giving some elements of the players a rest, and we still have one last match against Vietnam to complete the task.

• Only victory is required of "Al-Abyad" against Vietnam to pass to the third stage.