The national team's lead in the World Cup qualifiers... passes through the gate of Indonesia

The national team is playing an important confrontation in the way to get first place in Group G in the double qualifiers for the 2022 World Cup and the 2023 Asian Cup, when it meets Indonesia, today at 8:45 at Al-Wasl Stadium in Zabeel, as it seeks to win to continue the pressure on 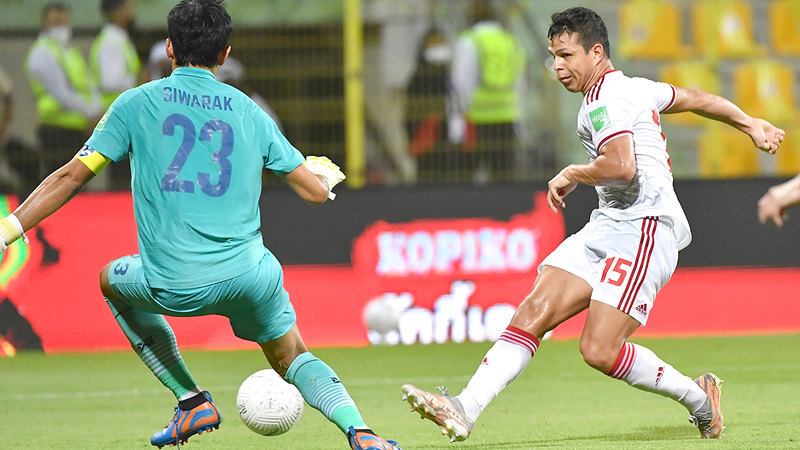 Shaheen Abdel Rahman: We will not lose sight of the victory

The national team's lead in the World Cup qualifiers... passes through the gate of Indonesia

Lima starred remarkably and contributed to the two victories over Malaysia and Thailand.

The national team will play an important confrontation in the way to get first place in Group G in the double qualifiers for the 2022 World Cup and the 2023 Asian Cup, when it meets Indonesia, today at 8:45 at Al-Wasl Stadium in Zabeel, as it seeks to win to continue the pressure on the leaders Vietnam, who plays at the same time with Thailand at Al Maktoum Stadium in Al Nasr Club.

The team enters the match with high spirits, after achieving two consecutive victories by defeating Malaysia with four goals without a response, then defeating Thailand with three goals to one, to advance to second place in Group G with 12 points, two points behind the leader Vietnam, who has 14 points, and comes in Thailand and Malaysia are in third place with nine points each, while Indonesia is in fifth place with one point.

The team focuses more on the lead, as it has the opportunity in its hand, on the condition of winning over Indonesia, and waiting for Vietnam to stumble, and in the event of the latter’s victory, the struggle for leadership will be postponed until the end of the second stage, next Tuesday, as the white will suffice to beat Vietnam to reach the top, and determine the direct qualifier to the stage The last of the qualifiers.

On the other hand, if the national team is not topped, it will qualify as the best five seconds for the eight groups, in which case the results of the Indonesia team will not be counted.

After North Korea withdrew from the Group of Eight, the results of the last team in each group were crossed out for determining the best five seconds.

Although Al-Abyad occupies third place in the list of teams competing for the five seats, the team has nine points, equal with Uzbekistan, Iran and Oman, while Lebanon leads the standings with 10 points, after deducting the points from each team. The team that occupies the last place in their respective group, but the technical staff focuses on avoiding entering into complex calculations, by achieving victory over Indonesia and Vietnam, to advance to the first place.

Dutch coach Bert van Marwijk is betting on the team's great readiness in the past two matches, especially with the brilliance of Abdullah Ramadan, Fabio Lima and Caio Canedo, while the team hopes to repeat its superiority over Indonesia, after the first leg at Al Maktoum Stadium in Al Nasr Club witnessed the victory of "Al-Abyad". » With five goals without a response, in addition to confirming the historical superiority over him, as it is the third time that the two teams meet, after the UAE team won their first meeting in the group stage of the 1996 Asian Cup with two goals without a response.

The team is playing the match in complete ranks, after Khalil Ibrahim returned to group training with the players, recovering from the injury he suffered in the first match against Malaysia, while Van Marwijk seeks to resolve the outcome of the match early, and not to repeat the scenario that happened against Thailand, with Mohamed Juma Pele scoring the third goal. In the fourth minute of stoppage time, after the opponent was pressing hard to score the equalizer, and despite winning against Malaysia by four goals without a response, the team advanced by one goal until the 83rd minute, before scoring three consecutive goals in the last minutes of the match.

Although Indonesia bid farewell to the qualifiers early, and moved away from the competition to qualify for the third stage of the World Cup qualifiers, and the same thing by leaving the competition for the qualifying spots for the Asian Cup, but he is playing his last match in the qualifiers, and may pose a great danger to the team, especially since Indonesia He appeared very well in the second leg, and scored his first point against Thailand with two goals each, and despite his loss in the last round against Vietnam with four goals without a response, but he finished the first half tied without goals.

For his part, national team defender Shaheen Abdel Rahman said in a press statement: "We will not waste the points of any match in the current qualifiers," promising to make every possible effort and sacrifice the most precious and precious in order to continue victories, until Al-Abyad crosses to the next stage of the qualifiers.

■ 12 teams qualify for the third and final stage.

■ victory over Indonesia and Vietnam guarantees him the lead, and qualifies directly.

■ Any result other than a victory over Indonesia makes the lead hostage to the results of Vietnam.

■ If he does not top, he has the chance to qualify as the best seconds, pending the results of the eight group seconds.

• High morale for the white players to achieve the third win in a row.