SVT broadcasts the U18 WC and Damkronorna's Olympic qualifiers

The U18 WC for women will be decided in Mjölby and Linköping in January 2022. The Women's Crown's Olympic qualifiers will also be decided in Sweden in November, with Luleå as the venue. It is now also clear that SVT will broadcast matches from both tournaments. 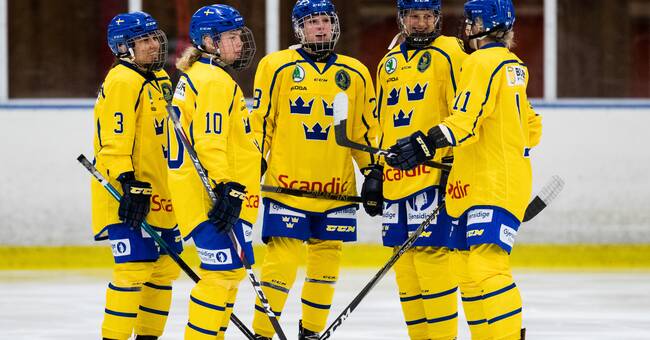 The women's U18 WC was to be decided in Sweden already in 2021, but due to the corona pandemic, the tournament was canceled.

Now the Swedish ice hockey association together with the venues Linköping and Mjölby get a new chance to arrange the championship.

- We see that Swedish girls' and women's hockey is developing and interest is growing with it.

We have also launched the Swedish ice hockey women's and girls' initiative 2021–2030, which aims to create sustainable change and exchange on the women's side, so it feels inspiring to be able to show the world's best juniors at home, says Swedish Ice Hockey Association general secretary Johan Stark in a press release.

"We will set a new level of television"

Eight countries participate, and the game schedule will be presented closer to the start of the tournament.

SVT hooks on and will broadcast matches from the championship.

- We know that a hockey World Cup at home is engaging and that many are curious about tomorrow's stars.

We therefore look forward to showing all of Sweden's matches and the final from the junior WC for SVT's large audience.

We are also looking forward to making a TV production from the tournament worthy of the world's best junior team on the women's side.

Previous championships, match productions have been substandard, but now we at SVT will set a new TV level that we hope will become standard in the future, says Åsa Edlund Jönsson, sports director at SVT.

The Olympic qualifiers will be decided in Luleå starting on November 11, where the Swedish women's crowns will be set against France, Slovakia and another nation.

There is a place in the pot to reach the Winter Olympics in Beijing 2022.

Here, too, SVT broadcasts matches from the qualifying tournament.

- The Olympic qualifier will be the women's most important tournament in 2021. Here the national team gets a chance to play in hockey's fine room at home, the Olympics in Beijing, and we at SVT look forward to showing this nerve-wracking qualifier, says Åsa Edlund Jönsson.