"He turned out to be better than I thought": Mayweather failed to defeat blogger Paul in an exhibition boxing match

Former world champion in five weight divisions Floyd Mayweather and popular blogger Logan Paul failed to determine the winner of the boxing match held in Miami. The meeting lasted all eight rounds, during which a professional athlete dominated. After its completion, he admitted that his opponent managed to surprise him. The YouTube star, in turn, said that this fight was one of the best moments in his life. 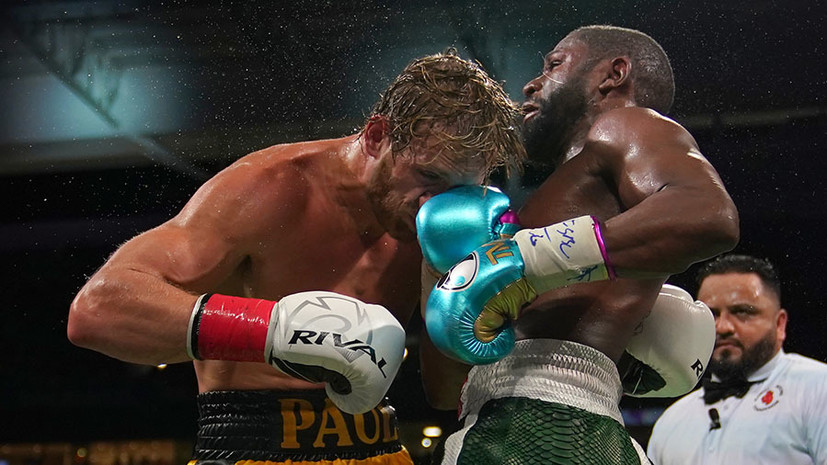 In Miami, a boxing evening took place at the Hard Rock Stadium, the main event of which was one of the most anticipated fights of the year.

The fight lasted eight rounds, but the rivals did not manage to determine the winner.

On the eve of the meeting, almost no one doubted that one of the best boxers of our time would not have problems with the Internet star.

Confidence in Floyd's unconditional victory was expressed by Mike Tyson, Roy Jones and others.

At the same time, age spoke in favor of the blogger - he is 18 years younger than his opponent - as well as physical data.

The floor is 15 cm taller than Mayweather, and at the official weigh-in was 15.4 kg heavier.

Recall that the meeting was supposed to take place at the end of February, but was postponed due to the coronavirus pandemic.

Thanks to this, the opponents not only got the opportunity to better prepare, but also to further whet the audience's interest.

So, for several months, several incidents with their participation occurred at once.

In early May, they got into a scuffle at an official press conference, instigated by Paul's younger brother, also popular blogger Jake Paul.

A tense atmosphere reigned in the duel of views.

The rivals stood close to each other for a long time, and when Paul moved away from Mayweather, he again approached him.

Let the madness in Miami begin 😤🔥

In accordance with the regulations, the fight was supposed to last eight rounds of three minutes.

In the event that in the allotted time none of the boxers succeeds in knocking out the opponent, the winner is not announced.

The 80,000-seat arena enthusiastically greeted the entry of opponents into the ring, expecting bright actions from them from the very first seconds of the meeting.

However, the boxer and blogger were in no hurry to end the fight ahead of schedule.

In the opening round, Paul dominated, but it seemed that Mayweather deliberately gave him the initiative, preferring to get used to his opponent.

This gave the blogger some confidence and during the first six minutes he showered his opponent with blows, which, however, did not cause any tangible damage.

Floyd got into the fight in the third round and finally took the initiative, demonstrating that he is the favorite in the ring.

Paul missed several accurate punches at once, including to the head.

By the fifth three minutes, they became more and more, and the blogger's strength gradually began to leave.

This only provoked the boxer, who was in complete control of the situation.

By this time, no one doubted that his victory was not far off.

However, Paul continued to keep on his feet and the ending of the fight remained with him.

The athletes exchanged short punches, and the blogger even mocked the opponent, giving him the opportunity to attack.

If at the beginning of the fight Mayweather exuded confidence, then in the sixth round Logan was smiling, realizing that the great professional did not manage to defeat him.

“He turned out to be better than I thought.

He surprised me today.

In support of his words, statistics partly speaks.

At the same time, the boxer was more accurate - 43 versus 28 strikes on the target.

According to unofficial estimates, if the judges were present at the fight, the victory would have remained with him.

The result of the fight surprised many experts, fans and colleagues of Mayweather.

The majority opinion was expressed by the world champion according to several organizations Saul Alvarez, having published the corresponding emoji.

American Bellator fighter and partner of former UFC featherweight and lightweight champion Conor McGregor Dillon Denis were also unhappy with the outcome of the fight.

“Mayweather is a disgrace to all martial arts, and he doesn't even come close to real fighters.

Neither one nor the other will be able to compete with me even on my worst day, "wrote Denis on Instagram.

At the same time, Floyd himself was hardly embarrassed by the fact that he could not defeat a weaker opponent.

Neither before nor after the fight, he did not hide that in the confrontation with Paul he was more interested in the financial than in the sports component.

“Let's see who the real winner is when it comes to royalties.

Eventually I will get into the Boxing Hall of Fame.

I have nothing to prove, ”added the boxer.

Indeed, the boxer's fee is quite impressive: it was reported that regardless of the result, he will receive $ 10 million, as well as 50% of paid broadcasts.

The earnings of his rival are much more modest - $ 250 thousand and 10% of impressions.

Mayweather hinted that this fight will be his last.

At the same time, a few days ago, he announced his readiness to hold a revenge with McGregor.

Recall that the victory over the Irishman is considered his last success at the professional level.

As for Paul, after the meeting he had more reasons to be proud.

“Let no one else tell me that there is something impossible.

Being here with one of the greatest boxers in history ... This is one of the best moments of my life.

It is an honor for me to enter the same ring with him.

The coolest event ever.

And Paul Jr. did not miss the opportunity to laugh at Mayweather. He published a post with the caption "My brother just beat Floyd Mayweather" and "50: 1", hinting at the first "defeat" in a boxer's career, although due to the exhibition nature of the fight, the result will not be included in the statistics.