Watch - Conflict of hands and wrecking of chairs between Manchester City and Chelsea fans ... A burning atmosphere before the European Champions League final

The Portuguese city of Porto, which is hosting the Champions League final tonight, witnessed a battle in every sense of the word, during which the fans of Manchester City and Chelsea used hands, sticks, chairs and everything that possessed their faith. 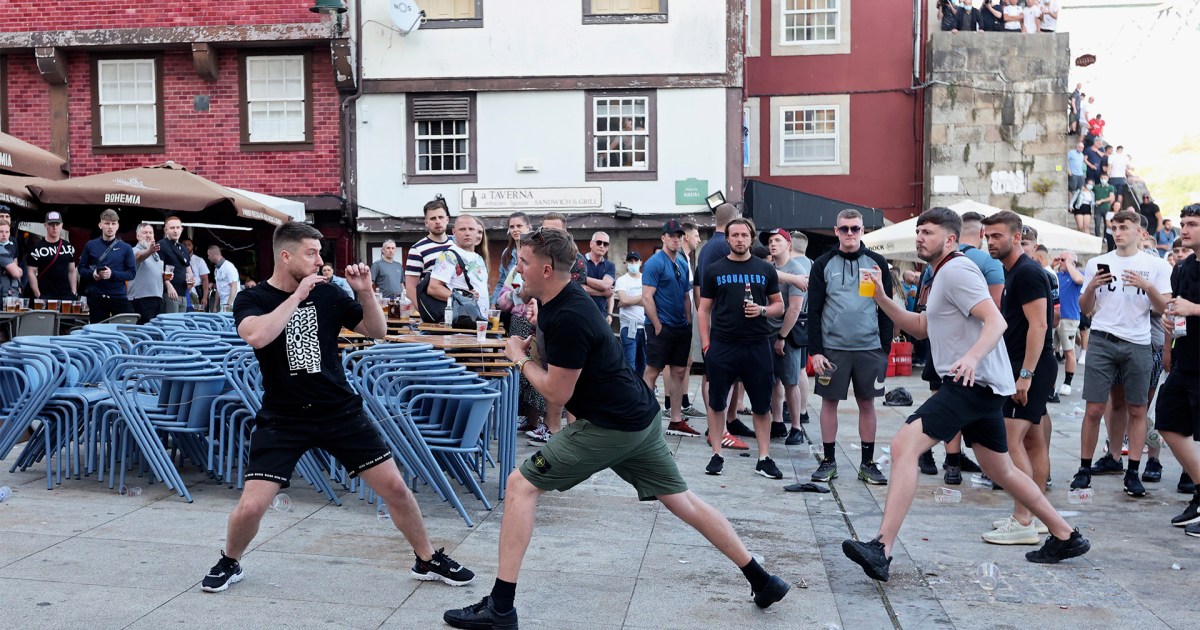 The Portuguese city of Porto, which is hosting the Champions League final tonight, witnessed a battle in every sense of the word, during which Manchester City and Chelsea fans used hands, sticks, chairs and everything that possessed their faith.

The masses of the two sides of the final match were not satisfied with the clash, but the clash moved between a group of them and the Portuguese riot police.

Pictures and videos showed dozens of fans throwing flags and chairs at each other, and then the situation developed into a conflict with fists.

About 16,500 people (33% of the capacity of the stands) will attend tonight's match in the stands, as each team awarded 6,000 tickets and another 2,000 to UEFA representatives and sponsors, with the remaining tickets sold in Portugal.

But there are many English fans - who do not have tickets - who have traveled to Portugal hoping to find a ticket in the "black market" or to be close to the venue of the event and celebrate the coronation of their team.

But these fans cannot follow the game in the bars because the latter closes at 10:30 at night (the game starts at 10:00) due to the health measures imposed by Portugal to combat the outbreak of the Corona virus.

All fans must present a medical certificate proving that they are free of Corona to allow them to enter the "Dragao" stadium in Porto.

On the 17th of this month, Britain added Portugal to the green list in its list, which is exempt from hotel quarantine for a period of 10 days.

As was the case last year, this time the Champions League final was also affected by the Corona pandemic, and the final match was moved from Istanbul to Porto due to travel restrictions imposed in light of the Corona crisis.

Turkey was added to the "red list" drawn up by Britain regarding travel, due to the high number of new cases of "Corona" virus, which means that returnees from any country on the red list must be quarantined in a hotel for a period of 10 days from the date of their return to Britain. .

Groups of men believed to be Manchester City and Chelsea fans clash in Porto ahead of the #UCL finalpic.twitter.com/ghNvh7qDgt

For some reason it always ends up with chairs being lobbed about 🤔pic.twitter.com / irFI4sY1Xp