How Medvedev can perform on the ground and whether Nadal will beat Federer's record: the main intrigues of Roland Garros

From May 30 to June 13, Paris will host the French Open tennis championship - the second Grand Slam tournament of the season. For the first time in 12 years, four Russian tennis players entered the seeded list at once, but Daniil Medvedev and Aslan Karatsev will try to win their first victories at Roland Garros. Reigning champion Rafael Nadal will have the chance to hold the record for the most major titles and surpass Roger Federer. Last year's winner of the women's tournament Iga Sviontek will try to become the first athlete in 14 years to defend her title in the main clay competition. 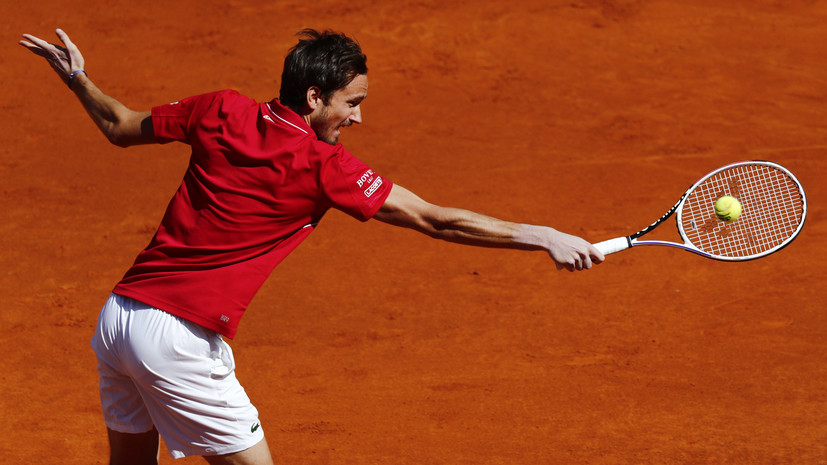 Selection for the Olympics

Roland Garros will be the last major tournament, after which the selection for the Olympic Games in Tokyo will be completed.

Participants in the competition will be determined by the world rankings recorded on June 14, that is, immediately after the finals in Paris.

56 best athletes will be able to play in single tournaments, provided that up to four tennis players can represent one country.

The Russian team shouldn't have any problems in order to achieve maximum representation.

Six months ago, there could be fears about the fourth quota for men, but with the breakthrough of Aslan Karatsev, this issue was resolved.

With a high degree of probability, it can be argued that even in the event of a failed performance at Roland Garros, the available positions in the ratings will be enough to qualify.

At the same time, if for men the members of the Olympic team have already been actually determined, then five Russian women claim to get into the women's team.

Veronika Kudermetova, Anastasia Pavlyuchenkova, Ekaterina Aleksandrova, Daria Kasatkina and Svetlana Kuznetsova are at least 40th in the WTA ranking, and the difference between them is less than 500 points.

Some of them will be superfluous, and this will be determined in Paris.

By the way, the same difficult choice will have to be made in the United States and the Czech Republic, where there are also too many tennis players with a high rating.

To find out which of the Russian men qualifies for the Olympics, just look at the list of seeded players at Roland Garros. It includes Daniil Medvedev (# 2), Andrei Rublev (# 7), Karen Khachanov (# 23) and Aslan Karatsev (# 24). There was no such representation at the Grand Slam tournaments for a very long time. The last time four Russians received seeding was at Wimbledon in 2009, when Nikolai Davydenko, Marat Safin, Dmitry Tursunov and Igor Andreev were in the top of world tennis.

Seeding will give the Russians some privileges when drawing lots. All of them will avoid meetings with players from the first eight until the fourth round, that is, they should not experience any special problems in order to get to the second week of the tournament, which only Rublev and Khachanov achieved last year. And Medvedev before the final will not intersect with the first racket of the world Novak Djokovic. True, with a stronger favorite Rafael Nadal, the best Russian tennis player can still play in the semifinals.

However, in the case of Medvedev, it is rather difficult to guess so far. The 25-year-old Russian is known for his difficult relationship with the French Open. So far, he has not won a single match in this tournament, despite the fact that he has already had four attempts. Medvedev even joked that his goal this year would be at least a victory in the first round, although later he recovered that he was going to Paris to win. But it will be extremely difficult to achieve it - this season Daniel won only one match on earthen courts, and even that in three sets against the Spaniard Alejandro Fokina.

The rest of the Russians should have more chances to prove themselves at Roland Garros.

All three in this clay season made to draw attention to themselves.

Rublev beat Nadal and reached the final of the Masters in Monte Carlo, and Karatsev defeated Djokovic at his home tournament in Belgrade.

Even Khachanov, who had not enjoyed titles for a long time, reached the semifinals in Lyon a week before the French Open.

By the way, Karatsev, like Medvedev, will also try to win the match at Roland Garros for the first time, only for him participation in the main draw of the tournament will be his debut.

For Djokovic and Nadal, the current Roland Garros may be the most iconic tournament of their career.

Both of them, in case of victory, will become the owners of such achievements that have not been conquered by any tennis player, and it will not soon be close to someone else.

Only Roger Federer has won the same number of trophies in his career.

The Spanish tennis player, the third in the ATP rankings, needs to win seven more matches in a row at his favorite tournament to officially become the most titled tennis player in the Majors.

At the same time, he may be the first in seven years to win the same Grand Slam tournament for the fifth time in a row.

Nadal's chances of a 14th win at Roland Garros are always high, but especially this season.

After the Australian Open, he played only in clay tournaments and became the best in Barcelona and Rome.

In the final of the latter, the Spaniard prevailed over Djokovic.

Only Rublev and the German Alexander Zverev managed to beat Nadal, and the Mallorca native immediately took revenge at the next competition.

Djokovic, on the other hand, needs the title at Roland Garros in order to become the first in tennis history at least two-time champion of all Grand Slam tournaments.

He has been pursuing this goal for five years, since he won his only victory in France after Nadal's injury.

Last year, the Serb was more than ever close to another hit in history, but in the final he lost to the same Spaniard.

He, too, lacks only one title for Roland Garros for the collection.

However, for him the very fact of participation in the main draw of the tournament will already be a big event.

The Swiss did not compete for over a year due to knee surgery and was only able to return to court this spring.

True, so far Federer is very far from his best form.

At the tournament in Doha, he beat the Briton Daniel Evans, but immediately lost to the Georgian Nikoloz Basilashvili.

In Geneva, the 39-year-old tennis player started with a loss to the 75th racket of the world, Pablo Andujara from Spain.

He did not perform anywhere else.

At the same time, Federer's past merits are still enough to occupy the eighth line in the world rankings and become a seeded tennis player at Roland Garros.

For him, this tournament will be the 80th Major in his career and will help improve his record for participation in major tennis forums.

In the women's grid, the same super-titled veteran, from whom loyal fans expect a miracle, will be American Serena Williams.

But all Williams' attempts ended in failure - at best, she reached the Wimbledon finals or the US Open.

Roland Garros is the very tournament where the chances of an American tennis player for success are even lower than usual.

After the birth of her daughter, her results in the main clay competition fell every year, until in the fall she refused to fight in the second round due to injury.

Williams' results are not encouraging this season.

After the semifinals of the Australian Open, she achieved the same as Federer - she won only one match in two tournaments, while she won over an athlete from the sixth hundred in the rating.

Protection of Svetek and Osaka Series

Special attention of fans and journalists will be focused on the sensational champion of the last year Iga Swiontek from Poland.

In the fall, she did not lose a single set in Paris and gave her rivals only 28 games, while being the 54th racket in the world.

Now, thanks to the refusal of Simona Halep, she will receive the eighth seed, which will significantly simplify her title defense.

However, Roland Garros has long been an unhappy tournament for those who have already won it. No one had managed to win it the next year for 14 years, since the Belgian Justine Henin lifted the Suzanne Lenglen Cup for the third time. If in men's tennis, new champions are extremely rare, then in women only at the French Open for the last five years athletes who have never won a major have won.

A rarity in women's tennis can be called a situation when one tennis player managed to win any two Grand Slam tournaments in a row. The last to achieve this was the Japanese Osaka at the junction of 2018 and 2019, and before her, Serena Williams was struck with such stability in 2015. Now the Japanese will try to extend the winning streak at the Majors to 14 matches, but clay tournaments are not her strong suit. This season, the surface has brought the second racket of the world only one victory, and at Roland Garros she did not go beyond the third round.

Sventek, on the other hand, feels much better on earthen courts, and this is her chance to defend the title.

She won a representative tournament in Rome, and more important than this event can only be the victory of the Belarusian Arina Sobolenko at the competitions in Madrid.

Another notable triumph during the clay part of the season was the first racket of the world, Ashley Barty.

The Australian won the tournament in Stuttgart (singles and doubles), after which she lost to Sobolenko in the final of Madrid.

She, too, should be ranked among the favorites of Roland Garros, especially since she already won it in 2019, when it was held at its usual time.

Russian tennis players can hardly claim victory at Roland Garros, but they have made some progress compared to previous years.

Back in early April, Veronica Kudermetova won the tournament in Charleston, becoming the first Russian woman to win on clay in the past three years.

She later reached the semifinals in Istanbul and won the doubles title there.

At the moment, Kudermetova even closes the first eight with the champion of the WTA race - Russian tennis players have already begun to lose the habit of this.

She performed great in Madrid and reached the semifinals, where she lost only to Sobolenko.

However, then she refused to perform in Belgrade, citing health problems.

But at the same time, the tennis player noted that this would help her come up ready for Roland Garros.

The tournament in Paris will be a special event for Svetlana Kuznetsova. This will be her 70th performance at a major - only the Williams sisters, American Amy Fraser and Italian Francesca Schiavone, have been able to repeat this. In the last three cases, the 35-year-old Russian woman did not win a single match at Roland Garros, and she completely missed the clay season, so she has little chance of even reaching at least the second round, but in any case she will be able go down in history.