Athletes have expressed their satisfaction and optimism that the national football team has achieved good results with the resumption of the joint qualifiers for the 2022 World Cup and Asia 2023, which will be hosted by the UAE next June. And they said that the strength of the Arab Gulf League competitions served the Whites before the start of the qualifiers, Mashaddi 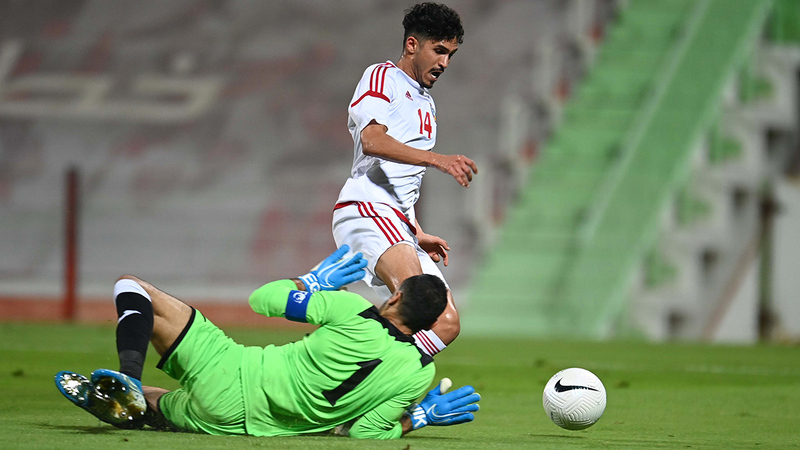 Athletes said that they are satisfied with the development of the "white" level .. and they confirm:

Athletes have expressed their satisfaction and optimism that the national football team has achieved good results with the resumption of the joint qualifiers for the 2022 World Cup and Asia 2023, which will be hosted by the UAE next June.

They said that the strength of the Arab Gulf League competitions served the white before the start of the qualifiers, stressing that the last season is the best version since the start of the professional league at the technical level, or the emergence of distinguished young players, who represent strong support for the national team in the next stage.

And they also said in an interview with "Emirates Today" that "the strength of competition for the league shield, and waiting to determine the winner until the last round, reflected the development of the teams' level, technically and physically."

And they indicated that there are players who have presented themselves well, and constitute an abundance of numbers in all positions, and this is a positive phenomenon, which made everyone feel very optimistic about the national team's ability to qualify for the final stage of the World Cup qualifiers.

The national team ranks fourth with six points, in Group G, which is led by Vietnam with 11 points, then Malaysia again with nine points, one point behind Thailand's third, and finally Indonesia without points.

The competitions will be held between the third and the 15th of June, and the team will inaugurate the return leg with a meeting with Malaysia, where they must win the four matches and wait for the results of others.

The athletes confirmed that the national coaches in the Gulf League have contributed significantly to this development, as Al-Ahly Youth coach Mahdi Ali succeeded in making a great leap in the team's level and elevated the performance of his players, both tactically and physically, and the same is true for coach Abdulaziz Al-Anbari, who succeeded over the course of three seasons in For Sharjah to impose a permanent competition for local titles.

"The league has produced a large group of distinguished young players, particularly in the age group from 20 to 25 years, and this confirms that the Arab Gulf League will be much better in the coming seasons," said the former player and national team player.

He added: “We have national players who outperform the foreigners, Ali Mabkhout is the league’s top scorer, and Ismail Matar is the best playmaker, and there are many numbers that confirmed the development of the players’ level in a way that we have not seen before, and therefore all these things were reflected on the level presented by the white in front of Jordan in their friendly match, which confirms that the league greatly benefited the national team.

Al-Wasl player and the former national team, Fahd Abdul-Rahman, stressed that the offensive side had significantly improved in the national team, and this was evident in Jordan's friendly.

He said: "What the national team presented, and specifically the trio Ali Mabkhout, Lima and Khalil Ibrahim, from the offensive aspect, is a reflection of their level in the league. We needed to focus on this aspect before competing in the World Cup qualifiers, because we needed to win all the matches."

He added: "What I hope for the national team, regardless of the results, is that technical stability will occur for the Whites, and the coach will remain as long as possible, because the frequent changes of coaches result in a change in the philosophy of play."

Al Dhafra coach Salem Hassan stressed that the Arab Gulf League provided the team with the greatest service before the World Cup qualifiers, and said: "The level of competition and the emergence of new players gave a lot of space for the national team coach to choose the team's list."

He added: "I have been following and working in the league for nearly 20 years, and I have not seen a competitive level of the competition in the way it appeared in the previous season, as the technical level of the matches exceeded the 75% barrier, unlike previous seasons, in which we watched a good match from time to time." .

And he added: "One of the advantages of the league that served the plans to prepare the national team is the dependence of the clubs on the emerging players, who have proven great capabilities, and we have in Al-Jazira Club the realistic example."

Former member of the Board of Directors of Al-Wehda Club, Dr. Jamal Al Hosani, confirmed that the development of the league’s level had positive repercussions on the team’s performance in Jordan’s friendliness, but there are other reasons that led to this.

He explained: “The football system in the Emirates has been completed and harmonized in terms of the support provided to the team, whether by the Football Association, or the success of the Professional League in presenting a regular league without compressed programming, as well as the great and clear work by clubs to develop the levels of their teams was among the positive factors that We must stand there and praise the work of these parties ».

Al Hosani also pointed out that: “The public and media pressure on the players, and warning them of the seriousness of the national team’s position in the World Cup qualifiers, increased the players’ sense of responsibility that falls on their shoulders, as well as the establishment of the second round of the qualifiers in the UAE and among our fans, and this gave positive and great motives for the players to provide the best. Levels to appear in the desired form in front of their fans ».

1- Players' technical and physical readiness due to the strength of competition.

2- The brilliance of a number of emerging players, which provides more space for selection in front of the coach of the national team.

3- The regularity of the competition, and the absence of compressed programming throughout the season.

4- Increased attacking potency with the brilliance of Mabkhout and Lima.

5- The league broke the barrier of permanent foreign supremacy at the expense of citizens.

6- The major role of citizen coaches Mahdi Ali and Al-Anbari in developing the level of players.

• Al-Abyad prepares for the second leg of the World Cup qualifiers in the Emirates between 3 and 15 June.