The star of the national team, Hanan Al-Harmoudi, bid farewell to the Asian Men's and Women's Boxing Championship Delhi - Dubai 2021, which Dubai is currently hosting, and continues until May 31, after losing to Kazakhstan's champion Lazat Congapiavia, the day before yesterday, in a match that was ended by the Kazakh champion. 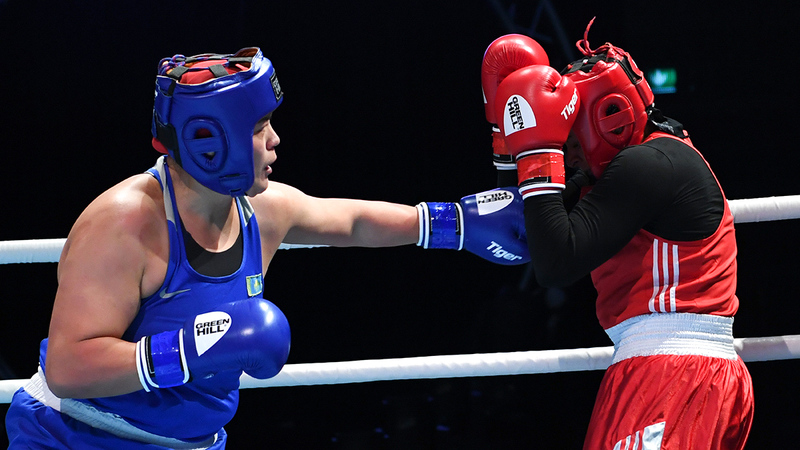 The star of the national team, Hanan Al-Harmoudi, bid farewell to the Asian Men's and Women's Boxing Championship, Delhi-Dubai 2021, which Dubai is currently hosting, and continues until May 31, after losing to Kazakhstan champion Lazat Congapiavia, the day before yesterday, in a match that the Kazakhstan champion finished in the first round. It was clear that Lazat excelled in experience and physical strength.

The Asian Championships witnessed a clear victory for the Kazakh champions, who dominated the various weights of the competitions, to qualify for eight of them to the final round, which is held tomorrow, in which the Kazakh Alwa Balkibikova will meet with the Uzbek Gulshal Sultanaleva in lightweight flyweight (45-48 kg) and Nazem Kizabi with Indian MC Meri Kum in flyweight (48 - 51 kg), Kazakh in Dina Zulaman with Uzbek Sitora Sugdarova in bantam weight (51-54 kg), and Kazakh in Vladislav Kokhta with Uzbek in featherweight (54-57 kg).

In the light weight (57 - 60 kg), the Kazakh will meet Rima Volusenko with the Indonesian Hoswatun Hasna, and in the light welterweight (60-64 kg), the Kazakh will play Milana Safronova against the Indian for the Potsaihi, and in the weight (69 - 75 kg), the Uzbek Mafolda Moflunova meets the Indian Pooja Rani, and in heavyweight (more than 81 kg), Kazakh Lazat Konjibayeva meets Indian Anupama.

Hoswatun Hasna is the first boxer from Indonesia to qualify for the finals of the Asian Boxing Championship, where she won the bronze medal at the 2018 Asian Games in Jakarta, and was able to improve her physical fitness in the recent period, until she reached her best condition, to be able this time to qualify for the fight. The final is in the Asian Championships Delhi Dubai, and Hasna struggled in the first round against Shwira Zulkainarova, the most experienced in Tajikistan, but she tried to maintain the right distance against the tall opponent, the Indonesian increased her rhythm, and got a few good punches in the tactical semi-final. , And the final ruling was a split decision in the interest of good.