The electronics engineer, Amina Dashti (28 years), succeeded ably in managing karate matches, as she became the first Emirati to manage the final of the men's "Kumite" competitions in the President's Cup competition, last week, at the Ittihad Kalba club hall. Today 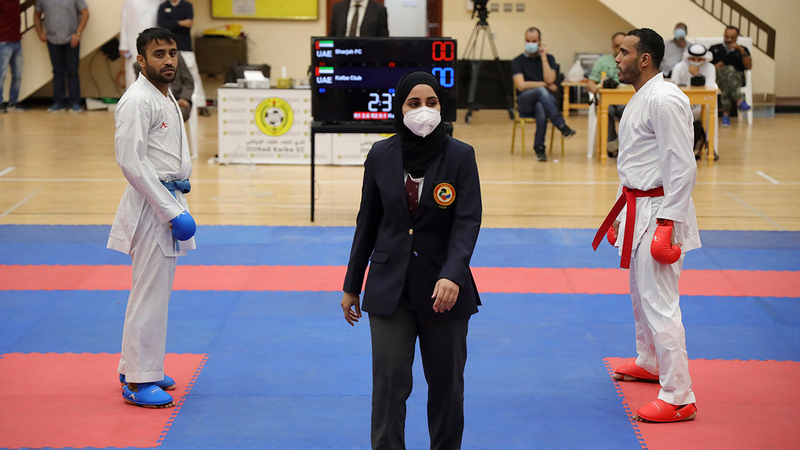 Amina Dashti aims to appear in the Olympic Games «France 2024»

The electronics engineer, Amina Dashti (28 years), succeeded ably in managing karate matches, as she became the first Emirati to manage the final of the men's "Kumite" competitions in the President's Cup competition, last week, at the Ittihad Kalba club hall.

Amina Dashti told «Emirates Today» that «the great support of the game federation was behind giving me the opportunity to enter the world of arbitration, and gradually rise until I got the international badge, whether in 2018 at the (kata) level or in 2019 at the (kumite) level, Before this support was established to give me the opportunity to manage matches in local competitions, and finally to become the first citizen wisdom to record her presence on the carpet of the game, and to manage the final of the (men's kumite) competitions.

She explained: “The encouragement of the president of the UAE and Asian federations, the first vice president of the International Federation, Major General Nasser Al-Razouki, and the great support that he always provides to the country's players and players, were behind my entry into the world of arbitration from a wide door, as the international emblem in (the kata) came during Dubai's hosting of the tournament. The world (Premier League), before I went to Jordan the following year to obtain the Asian badge during the continental championship, in accelerated steps that made it easier for me to manage local competitions, whether for women or men.

She added: “I had previously managed the (Kata) finals, but it was the first time that I had the honor of becoming the first citizen wisdom to register her presence as a president on the rug of the President's Cup competition, in the tournament that was held at the Ittihad Kalba hall, and the karate season marked the end of the karate season.”

And she continued: “The stoppage of sporting activity due to the (Corona) pandemic deprived me of the opportunity to participate in the continental championships, during which the international emblem is raised from the (B) level that I currently have, to the (A) level that allows me to be present in the global tournaments, but the continuation of The support from the game federation was behind giving me this opportunity again, by nominating me to be in the Asian championship to be hosted by Kuwait, next October, then the World Cup in Dubai, next November, in a step that will allow me to become the first Emirati wisdom in the Gulf to run the World Cup finals.

She concluded: "My ambitions are great, and I look forward to moving forward in achieving my goals, reflecting the bright image of Emirati women at the state level, and becoming the first wisdom in the region to succeed in managing Olympic tournaments, from the gateway to the 2024 French Olympiad."

• She was nominated by the Karate Federation to arbitrate the Asian Championship in Kuwait next October, and the World Cup in Dubai next November.