The return of Sobolev and Zabolotny's words about hate: how the Russian national team continues to prepare for Euro 2020

The Russian national football team held another training session in Austria in preparation for the European Championship - 2020. Alexander Sobolev returned to the team, who had not been in the general group the day before. He noted that he had already recovered from an ankle injury, told how braces hindered him, and commented on his comparison with Artyom Dzyuba. Another striker Anton Zabolotny said that he began to receive energy from the criticism of fans. Meanwhile, the Danish national team, with which Stanislav Cherchesov's charges will play in the group stage, announced the final line-up for the tournament. 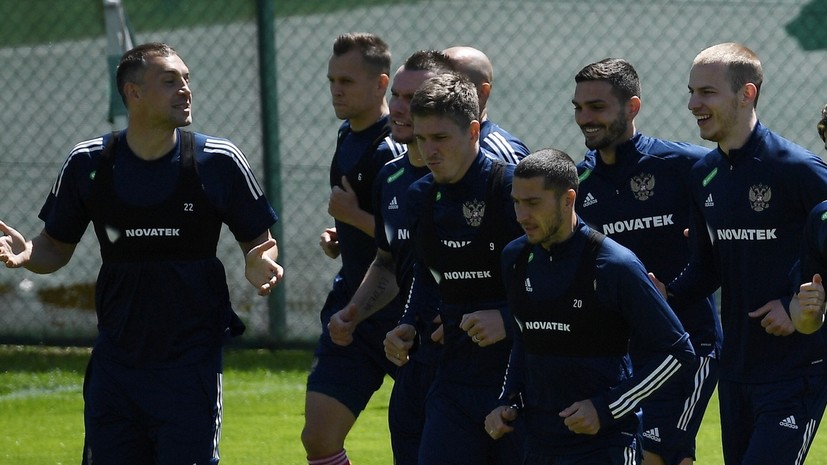 "There is fatigue, but this is what we are working for"

On Wednesday, May 26, the Russian national football team continued its preparations for the European Championship.

Stanislav Cherchesov's charges were scheduled to have a training session as part of a training camp in Neustift, Austria.

The lesson was attended by all the players who are at the disposal of the team, among them - Alexander Sobolev.

The day before, the Spartak striker did not train in the general group due to a minor ankle injury, but managed to recover from it rather quickly.

After completing all the exercises, he went to the journalists and spoke in more detail about his health.

“At the last training session, I slightly twisted my ankle, they decided to pause.

Everything is calm, tomorrow I will be in common.

It's hard for everyone.

Everyone understands, everyone tolerates.

Getting ready for a serious tournament.

There is fatigue, but this is what we work for.

Not everyone likes this kind of work, but we endure.

We have good teams in the group, everyone is preparing.

I will rate today's training session at 9 out of 10, ”Sobolev told the Championship.

In the appearance of the attacker, one new feature could be noticed - he put himself braces.

The player said that because of them it became more difficult to train, but there was no better moment to go through the procedure necessary for the teeth.

“I put braces on myself, took care of my teeth.

But it is not easy to combine it, it is unpleasant to train when you are treating your teeth.

I started doing this two months before the Euro, now I'm used to it.

But it was uncomfortable in training and games.

Therefore, I did it before Euro, ”the footballer noted.

During a conversation with journalists, Sobolev was asked what he thinks about competing with Artyom Dzyuba for a place in the national team.

“I don’t think about the final bid at all.

I just work, I show myself.

In the competition with Dziuba I tried to recoup, we always have games.

We invent for ourselves to make it more interesting.

I tumbled, Artyom thinks that I did not do it.

Already tired of comparisons with Dziuba.

Where is it better?

He has scored 20 goals in a season and is the top scorer.

In this he is better, tired of listening to what I am better, and what he is.

It's not my job to compare, let others do it, ”Sobolev said.

The striker also said that the European Championship could open the way for Russian footballers to enter foreign clubs.

He himself, however, has not yet received such offers.

“It seems to me that many Russian footballers set the task of leaving for the European championship.

But there are many factors to look at.

First, it's your own game.

Secondly, the availability of proposals.

Now these proposals do not exist, but how they will appear, then it will be possible to reason.

For any Euro footballer, the Champions League, the World Cup are a kind of springboard, because there is a chance to show himself on the world stage, "the athlete said to RIA Novosti.

Finally, Sobolev commented on the appointment of Rui Vitoria as head coach of Spartak instead of Domenico Tedesco.

According to the players, while he knows little about his mentor at the club.

It's hard to say something yet, I'm in the Russian national team and I don't really know this coach.

I know that I coached Benfica.

But for now, all thoughts are about the Russian national team.

I thanked Tedesco for the season.

I have already said that with him I got to Spartak, this specialist wanted to see me in the team.

I have said more than once that with him I improved in physics, there were heavy and intense training and training camps.

In this regard, I think that I have added a lot, ”- Sobolev paid tribute.

After him, Anton Zabolotny, the third forward in the Russian national team, came out to talk to journalists.

He told how the fans' criticism affects him, and did not confirm his transfer from Sochi to CSKA, which has not yet been officially registered.

“I won't say that there was no pressure in Sochi.

There was always talk that this is such and such a club.

The experience of communicating with specialists and haters has increased.

The match with Serbia is the starting point.

It was after that hate that he began to relate adequately, he was charged in the winter from this.

This was the starting point.

Over the course of the year, I added to the completion, as I worked a lot on it.

I'll leave my club affairs for later, I'm ready to talk only about the national team, ”Zabolotny said.

The striker also described the atmosphere in the national team.

According to him, each player in his position can count on the fact that he will take to the field in the Euro 2020 match.

“We have healthy competition.

All attackers understand that they have to give all their best in every workout.

Whoever is better will play.

Each player keeps in his head that at the end of the training camp the composition will be determined.

Everyone works to stay.

Direction only to improve their qualities.

It is difficult to assess the general condition of the team, because I missed some time, ”the player admitted.

Zabolotny at the same time repeated one of Dziuba's jokes, heard during training, and told what the players do in addition to training.

He noted that he does not want to think only about classes and preparation for the tournament, so as not to burn out.

“Dziuba shouted that someone was running slower than Ignashevich, but he didn't hear who.

But the joke went on.

In Austria, there is always a high spirits, such landscapes.

If you focus only on work, think that this is hyper-work, then it will be difficult.

We need to think positively, there are smiles on the faces of the guys.

You can go out for a walk, go back.

But all the time is spent on recovery, massage, procedures, ”said Zabolotny.

The composition of the future rival

On the eve, late in the evening, the composition of one of the rivals of the Russian national team in the group stage - the team of Denmark - was announced.

The head coach of the Scandinavians Kasper Hjulmand named 26 players included in the final application.

At his disposal were just 19 players who played in the big five European championships in the last club season.

The rest of the players represent Danish clubs, Swedish Malmö and Championship Brentford.

Interestingly, there were eight forwards in the national team at once - of the teams that announced the final line-ups, only Germany and Portugal called so many.

The Russian national team will finish the group stage with a match with Denmark.

The meeting will take place on June 21, and this will be the only away game of Stanislav Cherchesov's charges - according to the draw, it will take place in Copenhagen, and not in St. Petersburg.