"We are in touch with Khabib": Kadyrov explained why he called Nurmagomedov a "UFC project"

Khabib Nurmagomedov proved that he was the best fighter in the UFC, Ramzan Kadyrov said, explaining why he called the native of Dagestan a "project" of this promotion. According to the head of Chechnya, he does not consider this word offensive and is in touch with the ex-champion - and he “does not say anything” about this. Kadyrov also answered the question why he offered the athlete to meet with one of the representatives of the Akhmat club, and said that Nurmagomedov would now defeat Tony Ferguson. 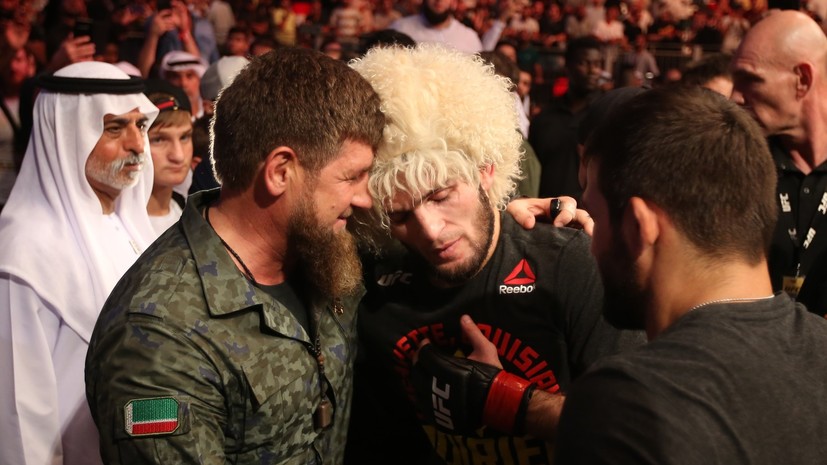 According to the politician, he does not consider this word offensive.

“This means that the organization has found a person who is useful, who will be of interest to the fans ... We are in touch with Khabib, with his brothers, with everyone.

They don't say anything, and you are talking nonsense ... I say - yes, he is the best in the UFC organization, he proved it to the whole world, but the project is a project, they found each other: he found this organization, and the organization found him ", - said Kadyrov live on Instagram Visit Chechnya.

The head of Chechnya also told why he proposed Nurmagomedov to hold a duel with a representative of the Akhmat club.

“I just said by the way, if he comes to our league, and it will be advertised.

What's the difference ... If you are sick, you have to be sick like a man, without offending each other, ”Kadyrov added.

Finally, he suggested that Nurmagomedov would "kill" Tony Ferguson, who on May 16 suffered his third defeat in a row.

According to the politician, the American “is not an athlete at all,” like Conor McGregor.

“They are just projects, they are doing shows.

Ferguson and McGregor are not interesting to them now.

They are given strong opponents and they lose.

The old ones are already tired, ”Kadyrov stressed.

Earlier, the statement of the head of Chechnya was commented on by the vice-president of "Akhmat" Aslanbek Badaev.

He also noted that he sees no negative in the definition of "UFC project".

According to him, after the victory over McGregor, the leadership of the promotion began to treat Nurmagomedov in a special way.

In particular, Khabib was not deprived of the championship belt when he failed to fly to the fight with Ferguson.

“In the same situations, we see that there is a special attitude towards Khabib.

Because the organization relies on it.

There is nothing wrong with the fact that Ramzan Akhmatovich called it a UFC project.

This does not detract from his achievements.

On the contrary, he is our brother, we were rooting for him, "Badayev said on the Instagram of Akhmat.

“While setting the Chechens and Dagestanis against each other, the provocateurs did not take into account that earlier Ramzan Akhmatovich congratulated Khabib Nurmagomedov on his victories, was present at his fight in the UAE.

They also forgot that Ramzan Akhmatovich went to Dagestan to personally offer condolences to Khabib in connection with the death of his father.

And now the words that Nurmagomedov is a UFC project, they turned into words of denial of his merits and physical data, "Sport24 quotes Dudayev.

The politician believes that the phrase "UFC project" in this situation should be taken exclusively in the context that the promotion additionally unleashed the Dagestani with the help of various marketing moves.

Finally, WBC and IBF light heavyweight champion Artur Beterbiev lamented that Kadyrov's remarks were only a consequence of the comment of a "bad man" who provoked the head of the republic to question whether Nurmagomedov would break any representative of the Akhmat club.

“The reaction of Ramzan Akhmatovich is natural and adequate, since he does not just finance the club and every fighter of this club.

He keeps his finger on the pulse of every athlete's career at Akhmat.

When someone says this to him, of course, he immediately has a reaction: “Who will break?

Khabib cannot tear everyone in the club.

Maybe he won't even break a single one ”, - quotes the words of the boxer Kavkaz Press.

In his opinion, Kadyrov is really ready to pay any money if Khabib decides to accept the challenge and fight one of the Akhmat members.

Only Alexander Emelianenko added fuel to the fire, who in one of his interviews stated that the native of Dagestan is really a UFC project, since he was always selected "easy opponents".

“He had one tough opponent - McGregor.

And he slightly overestimated himself.

And the rest of the fighters are generally unknown.

With whom did he fight, where?

Nobody knows about this.

They know about 29-0, and who won those 29 times is unknown, "Vseprosport quotes Emelianenko Jr.

Recall that Kadyrov called Nurmagomedov a "UFC project" last week. The head of Chechnya noted that Khabib has good relations with the head of the promotion, Dana White, and “good rivals” are being selected for him. He also reproached the athlete for never going into the octagon with the flag of Russia or Dagestan. Along the way, Kadyrov suggested that he meet with any representative of the Akhmat club.

“I don’t blame anyone and I don’t say that Khabib is not undefeated. Let him remain undefeated in all matters. In the UFC, he broke everyone 100%, but whether he will break everyone in Akhmat is already a question. I am ready to give him any weight and any fee for Khabib to perform at Akhmat. Willing to give any money to see if he breaks anyone. In the UFC, he did it, we were rooting for him. And in "Akhmat" we are rooting for ours. Willing to pay more than the UFC if he plays with our teammate. Let's see who will take it, ”Kadyrov said.

The Chechen-born UFC fighter Khamzat Chimaev, who plays under the flag of Sweden, also left his comment on the live broadcast, who wrote: "We will tear him up if he wants to." Nurmagomedov himself ignored Khamzat's words, but his cousin Abubakar, who also plays in the UFC, accused his colleague of writing a complaint about the Chechen Republic after moving to Europe and recalled that he had previously sat with Khabib's team members at the same table and called them brothers.

In response, Chimaev recalled the conflict between the ex-UFC champion and his team members with Artyom Lobov shortly before the fight with McGregor in 2018 and thus hinted that they were afraid to solve problems one-on-one. However, later the fighter deleted all his posts, explaining this step with respect for the residents of Dagestan. Commenting on the situation, former UFC fighter Mairbek Tuisumov urged not to stir up the conflict between the peoples of Dagestan and Chechnya over the controversial posts of Chimaev.