"Having run away, I will jump off a cliff": how Slutsky lit up on his 50th birthday with Agutin and "Hands Up!"

The 50th anniversary of Rubin head coach Leonid Slutsky was celebrated in Moscow. The event was attended by the stars of Russian football, including Zenit striker Artyom Dzyuba, CSKA midfielder Alan Dzagoev and Krasnodar mentor Viktor Goncharenko, and famous musicians Leonid Agutin and Sergey Zhukov performed on the stage. In this case, the main character of the evening was Slutsky himself, who performed an incendiary dance on stage and sang the song of the "King and the Jester" group. 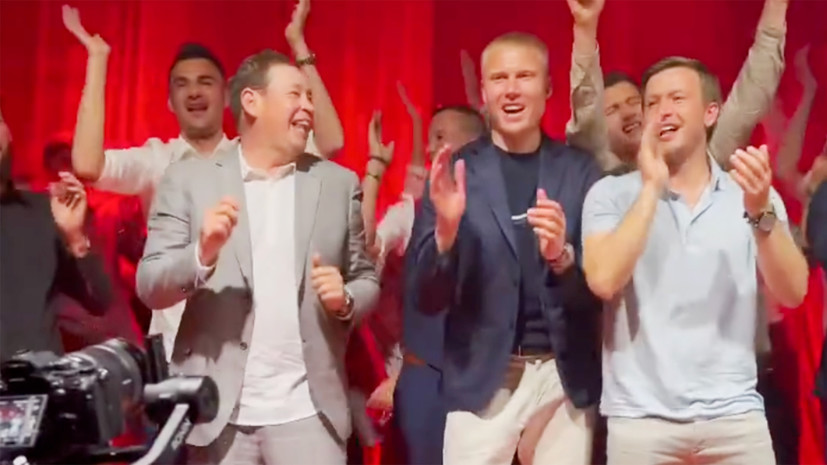 On the night of May 18, Rubin's head coach Leonid Slutsky celebrated his 50th birthday at the Moscow Soho club.

In addition to his charges and a number of employees of the Kazan club, the former coach of the Russian national team came to congratulate many well-known domestic players and specialists.

At the same time, the hero of the day, as expected, became the main character of the evening and managed not only to accept gifts, but also to entertain the audience.

It is worth noting that Slutsky turned 50 on May 4, but the celebration had to be postponed until the end of the season in the RPL.

Firstly, Rubin fought for a place in European competition and it was impossible to be distracted from the task at hand, and secondly, many of their colleagues could hardly have been absent from the club during the championship.

As a result, the citizens of Kazan retained their place in the top four and won a ticket to the League of Conferences, and the mentor, with a clear conscience, arranged the long-awaited event, inviting the stars of Russian football.

Among the guests were Zenit striker Artyom Dzyuba, CSKA midfielder Alan Dzagoev, Krasnodar head coach Viktor Goncharenko and many others.

The party on the occasion of Slutsky's anniversary was, as expected, remembered for its large-scale entertainment program.

The hosts were showman Alexander Gudkov and actress Ekaterina Varnava.

During the event, they managed to try on the T-shirts of the clubs that were headed by the coach: Rubin, Dutch Vitesse, English Hull City, Samara Krylia Sovetov.

Not without performances by famous artists.

One of the favorite performers of the Rubin head coach, Leonid Agutin, as well as the former vocalist of the Hands Up!

Sergei Zhukov, whose songs Slutsky sang along with Dzagoev and Dzyuba.

The audience was also entertained by stand-up comedian Ivan Usovich, who at the end of his speech addressed the hero of the day.

“The only coach from Russia who has coached in England.

The only coach to reach the Champions League quarter-finals.

And the only person in the world who still likes KVN, ”Usovich said.

A special gift was prepared by the footballers and employees of Rubin, who were almost fully present at the event. Slutsky was shown an 11-minute collection of clips entitled "Old songs for the main thing", in which the players and coaches of the Kazan team tried on the images of the mentor's favorite musicians. So, Georgy Zotov, Mikhail Kostyukov and Alexey Gritsaenko "sang" the song of the ensemble "Pesnyary" - "Mowing Yas Konyushinu", Alexander Zuev and Karl Starfelt - hit of the duet Modern Talking - You're My Heart, You're My Soul, Oleg Shatov , Djordje Despotovich and Darko Yevtich - "Girls as Stars" by Andrey Gubin, Oleg Yarovinsky, Oleg Kuzmin and Oleg Veretennikov - "Hali-Gali" of the "Leprikonsy" group. The video ended with the composition "The Ice is Melting" by the "Mushrooms" collective, in which Leonid Viktorovich himself demonstrated his vocal skills.

Slutsky is known for his humor and talents as a showman, so it is not surprising that he entertained the guests on a par with the artists.

At the end of the showing of the video, he, together with the footballers and assistants, went up on stage to the song Live is Life by the Opus group, and then noted a couple more performances.

First, he performed a fiery dance in the company of Olga Berezutskaya, the wife of the Krasnodar coach and former Russian national football team player Vasily Berezutsky, and then sang the composition of the King and Jester group - “I will jump off a cliff”.

The holiday was not without memorable congratulations and expensive gifts.

In particular, Slutsky was presented with Diego Maradona's T-shirt autographed by the legendary football player.

And Dziuba made a toast from the stage, in which he expressed his readiness to work with a specialist again.

Previously, Artyom played under the leadership of Slutsky in the Russian national team.

“I’m going to the Netherlands with you, and Guam, and we will rock together.

It will be like in Madagascar - a lion and a hippopotamus.

Happy birthday, we love you madly.

I wish you happiness and health, ”said Dziuba.