The hope of a Champions League game is alive for Liverpool. Thank you Alisson Becker for that. The goalkeeper won the match when he stepped up on a corner, and nodded in the winning goal in the 95th minute. - I can not be happier than I am now, says an emotional Alisson. 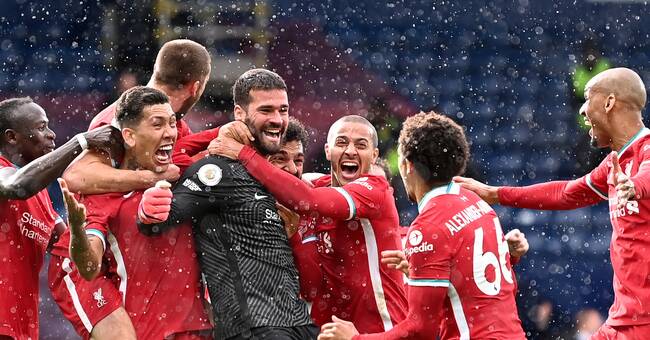 Liverpool looked set to lose ground in the chase for fourth place and Champions League play when the match clock stood at 94 minutes and they only had 1-1 against second-placed West Bromwich.

He resolutely stepped up on a corner, the last thing that would happen in the match, and just as firmly nodded in the winning goal to Liverpool.

The scenes of joy afterwards testified to the importance of the points that the goal entailed.

But it was also extra emotional on a personal level for Alisson.

- I am so emotional after everything that has happened to me in recent months, says Alisson in Viaplay's broadcast.

It was in February that Alisson's father died in a drowning accident while out fishing, and Alisson thanked both the family and people in football for all the support after the tragedy.

- Soccer is my life.

I've been playing for as long as I can remember, with my dad.

I wish he was here, but I think he saw, he says.

The home team and already relegated West Bromwich took the lead after a quarter when Hal-Robson Kanu came free in deep and rolled in 1-0.

Liverpool did not lack for opportunities, among other things, Sadio Mané had a ball that went close outside, and in the 33rd minute, Mohamed Salah was able to equalize with a quick finish in the far corner.

One point behind Chelsea

Roberto Firmino hit the post shortly after the goal, but Liverpool did not get any more ball - until the last extra minute.

We aim to take a Champions League place - we have won the title before, and we know that it all starts with qualifying, says Alisson.

Liverpool are in fifth place with 63 recorded points, one point less than Chelsea in fourth place.

Closest behind Liverpool is Tottenham, who took a 2-0 victory against Wolverhampton.