Dziuba's poker, the rescue of "Rubin" and the postponement of the match in Ufa due to the heat: what did the 30th round of the RPL stand for?

Zenit striker Artyom Dziuba designed poker in the match with Tambov and overcame the bar of 200 goals in his career. Dmitry Rybchinsky's goal in the 89th minute helped Lokomotiv break the resistance of Ural, who was playing out the game with nine, and Rubin guaranteed itself fourth place and a ticket to the Conference League only in stoppage time by the second half. Rostov failed to beat Krasnodar in the RPL for the 14th time in a row, and Ufa in their field prevailed over Arsenal, despite the postponement of the meeting due to the heat. The main events of the final, 30th round of the Russian championship of the 2020/21 season are in the RT material. 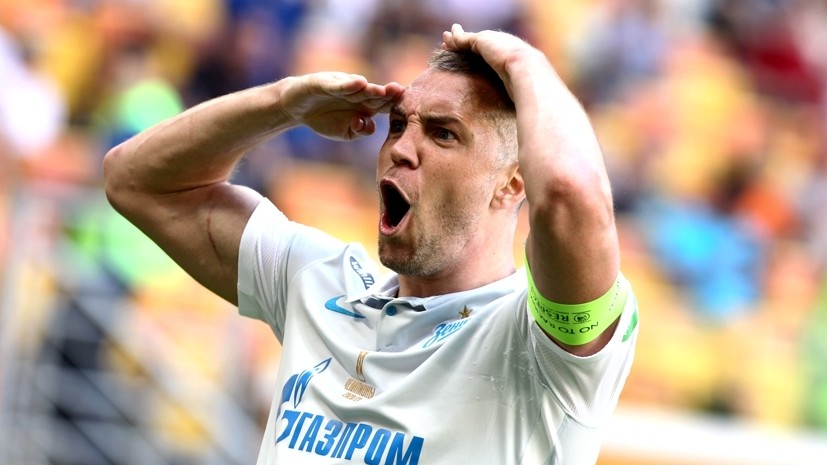 The rescue of Spartak and the tortured victory of Lokomotiv

One of the main intrigues of the ending of the Russian Premier League (RPL) season was the fight for silver medals between Spartak and Lokomotiv. On the eve of the final round, Domenico Tedesco's wards were three points ahead of their closest pursuers, as a result of which even a draw with Akhmat allowed them to keep the second line and get the opportunity to break into the group stage of the Champions League for the first time since 2017. And the history of personal meetings with Grozny clearly indicated that the red and white should not experience problems. The last four games ended in their favor with a total goal difference of 11: 2.

But this time the debut of the match ended not in favor of Spartak. At the beginning of the half, Quincy Promes missed two great chances to score, and then the sporting rule worked. Vladimir Ilyin scored a double with an interval of 11 minutes, and Ilya Kutepov made two gross mistakes in defense. At first he did not move towards the Akhmat striker and allowed him to shoot freely from outside the penalty area, and then lost the horse fight.

Apparently, during the break, Tedesco reminded his players that defeat could deprive them of their chances to qualify for the Champions League, so the red and white spent the second half at a different level. Already in the 54th minute, Promes rehabilitated himself for an unsuccessful game in the first half and reduced the score gap, and in the end, Victor Moses with a powerful blow stitched the net of Giorgi Shelia's goal. Spartak snatched points for the tenth time during the championship, yielding during the meeting, and guaranteed itself second place.

In turn, Lokomotiv did everything necessary to bypass the competitor and win silver medals. Marko Nikolic's wards, with a minimum score, prevailed over Ural in their field and extended their unbeaten run against Yekaterinburg to six meetings. And this despite the fact that already in the eighth minute they lost their main striker in the person of François Camano, and subsequently experienced colossal problems with implementation.

Throughout the match, the railroad workers had an overwhelming playing and territorial advantage, which was largely due to two deletions in the Ural squad.

In the middle of the first half, Rafal Augustyniak received a second yellow card, and towards the end of the second, Daniel Mishkich followed his example.

Nevertheless, before the break, Lokomotiv never disturbed Yaroslav Godzur, and scored only a minute before the end of regular time.

Dmitry Rybchinsky distinguished himself with Fedor Smolov's pass and helped put the squeeze on Ural.

This success allowed the red-greens to finish the championship on a high note and stay one point from Spartak.

In addition to the opportunity to compete for a ticket to the Champions League, the names of the Conference League participants from Russia were determined in the final round. Rubin, Sochi and CSKA fought for the fourth and fifth lines giving this right. Moreover, the army team had to not only beat Dynamo in the Moscow derby, but also hope that at least one of his opponents would lose.

As a result, the wards of Ivica Olic could not even solve their own problem. At the beginning of the first half, they took the lead through the efforts of Nair Tiknizyan, but conceded twice in the middle of the second half. Vyacheslav Grulev appeared on the field in the 63rd minute, and after nine he had two goals in his assets. For comparison, he scored the same in 25 previous games in the RPL. Chidera Edjuke's precise shot helped CSKA revive the intrigue, but Arsen Zakharyan dashed his hopes. Young midfielder "Dynamo" fled into a counterattack and, not without the help of a ricochet from Konstantin Maradishvili's leg, brought victory to the blue and white. CSKA finished the season on the sixth line and for the first time in 20 years were left without European cups.

It is worth noting that until the last minutes CSKA still had chances to rectify the situation and get into the Conference League zone. If in the Moscow suburbs Khimki and Sochi did without goals scored, which suited both one and the other, then a real drama took place in Kazan. For most of the meeting, Leonid Slutsky's wards had an advantage and had excellent chances to come out ahead, until Karl Starfelt made a stupid mistake in his own penalty area. During the filing of a corner, the Swedish defender raised his hand up for no apparent reason and touched the ball flying over his head with his hand. After consulting with the video assistant, Vitaly Meshkov pointed to the point, and Flamarion converted the penalty.

Until the stoppage time, Rubin was in the role of catch-up and risked being left without European cups, until Sergey Makarov made a mistake in a similar style.

The hand put out by the defender of "Rotor" was in the path of the ball, and Meshkov again appointed the 11-meter.

In the case of a save by Josip Chondrich, Volgograd could bypass Ufa and Arsenal, sharply increasing the chances of retaining a registration in the RPL, but the Croatian goalkeeper lost in a duel to George Despotovic.

As a result, the fate of Rotor was decided in the confrontation between Ufa and Arsenal. Initially, the meeting was supposed to be at 14:00 Moscow time - in parallel with the others. However, on the day of the game, an abnormal heat was established in the capital of Bashkortostan, and the thermometer rose above 39 ° C. According to the regulations, the game could not be played in such conditions, as a result of which it was decided to postpone the start of the match to 16:00 Moscow time.

As a result, the charges of Alexei Stukalov extended the unbeaten run and inflicted the fourth defeat in a row on the Tula.

The match ended with a score of 3: 1 in favor of the hosts, and the author of the winning goal was Maxim Belyaev, who cut the ball into his own goal in the 43rd minute.

And after the break, Arsenal's chances of a comeback were minimized by Gia Grigalava.

The defender received a direct red card and left the team in the minority.

In unequal compositions "Ufa" distinguished itself for the third time and removed all questions about the winner.

Such a result was completely satisfied with Ufa and Arsenal, which retained their registration in the Russian Premier League.

Stukalov's wards with 25 points took 13th place, and the Tula players are 14th with 23rd.

Rotor lost one point to its closest competitor and was unable to gain a foothold in the country's top division.

As for Zenit, all the circumstances were conducive to the fact that Sergei Semak could experiment with the composition. Firstly, the Petersburgers have long guaranteed themselves gold, and secondly, they were opposed by the main outsider of the championship in the person of Tambov. Therefore, the mentor decided to do without legionnaires and released 11 Russian footballers on the field. In the line-up there was even a place for the young goalkeeper Daniil Odoevsky and defender Danila Khotulev.

As expected, the "wolves" were unable to provide adequate resistance to the champion of Russia for the last three years. At the end of the first half, they miraculously restored parity, but in the second half they fell in and conceded four times in a row. The protagonist of the match was Artyom Dzyuba, who chalked up four goals scored. This allowed him not only to overcome the bar of 200 goals per career, but also to break into the leaders of the scorer race. The striker of the Petersburgers repeated the achievement of Smolov five years ago and with 20 accurate strikes he bypassed his Zenit partner Serdar Azmun (19). At the same time, the captain of the Russian national team could have issued a penta-trick, but he was slightly ahead of the Tambov defender.

In addition, Dziuba came out on top in the history of the Russian Premier League in terms of the number of goals.

Before the start of the meeting, he had an equal number of goals scored with Alexander Kerzhakov (both - 133), but poker at the Tambov goal allowed him to bypass the ex-forward of Zenit and the Russian national team.

Like Zenit, on the eve of the final round, Rostov and Krasnodar were deprived of motivation.

The teams unsuccessfully spent this season and settled in the middle of the table, having no chance to compete for European cups.

Despite this, the southern derby turned out to be intense and rich in goals.

On the road, the Bulls prevailed with a score of 3: 1 and strengthened their status as the most inconvenient opponents of the Donetsk side.

At the moment, the yellow-blues have completed only 4.5% of head-to-head meetings in their favor, and their losing streak is 14 matches.

It is noteworthy that this time the goals were scored exclusively by the guests' footballers. Kristoffer Olsson, Wanderson and Kayo sent the ball into the opponent's goal, and Yuri Gazinsky - into theirs. At the same time, the "shot" of the Brazilian defender turned out to be a masterpiece. He was the first on the rebound and drove the ball into the far corner from 28 meters. By this time, the Rostovites were already without a coach - Valery Karpin was removed from the bench for the second yellow card. According to the mentor, referee Alexei Matyunin mistakenly thought that the mentor had thrown a bottle at him.